Hauntings in the West 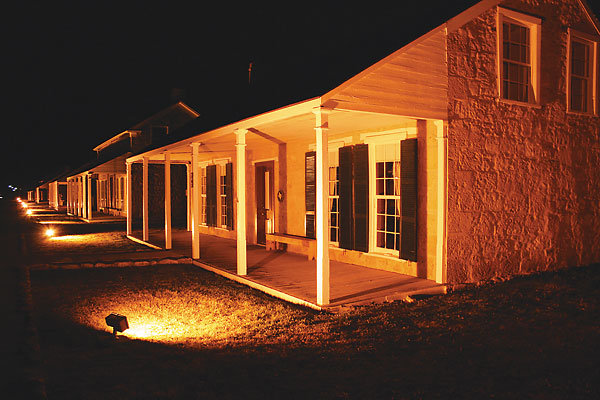 I’ve been warned that a friendly ghost lurks about the Ellis Country Store Inn in Lincoln, New Mexico.

They’ve put me up in the haunted Mill House, and I’m thinking, “Why must every B&B, every hotel, every house in the West have a ghost?”

Don’t get me wrong. I believe in ghosts. It’s just that ghosts, for some reason, don’t believe in me.

I retire to my room and go to sleep. Zzzzz. It’s past midnight when I instantly wake up. The night’s still. I feel a little strange. I close my eyes. Then, a huge gust of wind, as if summoned from the nether world, roars through the trees outside, and the door to my room slams open.

Sensing a presence, trying to summon the courage to open my eyes, I slowly roll over.

Practically everywhere I’ve been, I’ve been warned of a ghost. Up in Cimarron, New Mexico, the St. James Hotel claims to have several ghosts. Hotel founder Henri Lambert’s wife supposedly frequents Room 17, and don’t even ask to stay in Room 18. They keep it locked because of that incredibly mean spirit, Thomas James Wright, who is said to have been murdered there.

When I stayed at Fort Concho in San Angelo, Texas, I was warned I might see the ghost of Edith Grierson, the 13-year-old daughter of 10th Cavalry Col. Benjamin Grierson. Edith died of typhoid fever in the upstairs bedroom. “Don’t worry,” I’m told. “She’s friendly.”

Most ghosts, it seems, are friendly— except for that jerk in Cimarron.

At Fort Concho, I was all ready to play jacks with little Edith. No luck. No sighting. My wife and son didn’t spot her either. Nor did 4th Cavalry commander Ranald Mackenzie’s ghost visit us. He haunts Fort Concho too.

In Arizona, the Yuma Territorial Prison State Park holds Haunted Tours in the spirit of Halloween, but I don’t think the park rangers believe the old pen is haunted. An alleged ghost haunts Fort Leaton State Historic Park near Presidio, Texas. And somebody said I might spy a ghost at the Virginian Hotel in Medicine Bow, Wyoming, but it must have spent the night downstairs in the Shiloh Saloon, celebrating with everybody else in Carbon County.

A phantom bellboy supposedly wakes guests in the Hotel Monte Vista’s Zane Grey room in Flagstaff, Arizona. Probably still trying to get a decent tip. I wouldn’t know. I was staying over at the Weatherford Hotel, but no worry, there’s a ghost there too—a woman floats about the Zane Grey Ballroom. Zane Grey and ghosts? He wrote Westerns, not horror stories. The Weatherford spirit, by the way, left me alone.

No ghosts ever bothered me in the Irma Hotel (where were you, Buffalo Bill?) in Cody, Wyoming, or in Denver’s Brown Palace Hotel (it’s probably out of most specters’ budgets). When I was at the 1859 Jail, Marshal’s Home & Museum in Independence, Missouri, I was warned before I stepped inside one cell that I might be overcome by an unnatural experience. “Something bad happened to somebody in there,” a man, who looked like he might be a bogey, told me. I stepped in.

But now I’m in Lincoln, wide awake in the middle of the night, slowly rolling over to face this apparition. My eyes open, and I make out the dark form of a human against the wall, and—finally—I’ve found my first Western spirit.

Then it hits me. It’s no ghost. That’s my shirt, hanging on a hanger on the wall.

I go back to sleep.