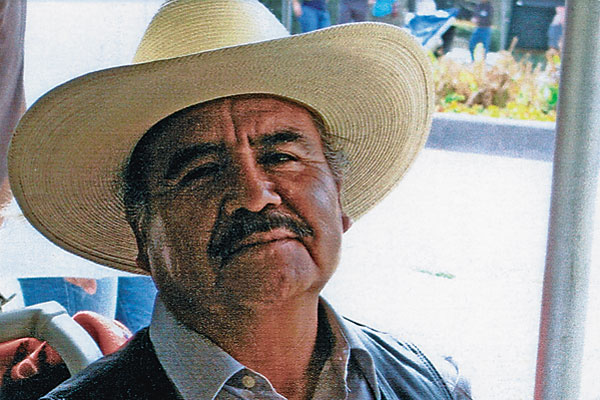 It sounds so romantic: An Apache violin is meant to lure a young woman to the young man playing it. This courtship tool, most effective in the spring, dates from the 1800.

Only a few Apaches still know how to make these instruments out of natural materials, and those who do are saving a dying art form that has been an important part of the Apache culture.

Anthony Belvado, of Arizona’s San Carlos Apaches, is one of those artists. He can wax on for a long time about the special powers of the violins he so painstakingly makes. He can also put them into modern perspective: “You’ve heard of eHarmony—this is where it came from!”

But ask him what this lovely instrument sounds like, and he admits: “It’s like slamming a door on a cat. It’s a high-pitched, whining sound.” Then he laughs out loud over how a tool for romance plays such an unromantic sound.

Regardless of its sound, Belvado says saving and passing on the knowledge of the Apache violin is one of his purposes in life. “No other tribe makes violins like we do, and it’s very important for it to be carried on,” he says.

Belvado is already the second generation in that effort, which began with his maternal grandfather Sulton Reede. “He was a well-known violin maker in our tribe, and I approached him and asked him to teach me,” Belvado remembers. At that time, the 52-year-old artist was in his mid-20s and had recently returned to the San Carlos Reservation after being raised in foster homes off the reservation. (“We lost our parents to alcoholism,” he says with sadness. As a young boy, he and his brothers and sister were placed in foster care.)

When he returned to the reservation, he wanted to reconnect with his culture. His grandfather’s talents were the key. That meant verbal communication with his grandfather and sitting for hours with him, watching and remembering. “In the Apache way, nothing is written down,” Belvado says, “so my grandfather would tell me and show me what materials to use and the meaning behind them.”

Belvado says the violin originated in the 1800s when Spaniards came through what is now Arizona. The Apache call it tsii’edo’a’tl or “wood that sings.” The materials used for it are decidedly Southwestern. The body is a hollowed out agave or century plant. The strings are horsehair coated with pine resin. The bows vary by artists; Belvado uses mulberry branches.

Some violins are left plain, but Belvado likes to paint his with what he calls “Apache colors”—black, blue, yellow and white. He has his own designs, just as his grandfather had his unique designs. “I can see a violin and know my grandfather made it,” he says.

“From the start, it takes me about two weeks to make a violin, from harvesting the plant to stripping the bark to sanding the bark, to hollowing it out and painting the Apache designs.” He says it’s important that this process not be witnessed, interrupted or touched by either young children or women, “or it will drain the power” from the violin.

This is an art strictly for the men of the tribe, and Belvado hopes to one day pass on his knowledge and love to his grandsons Jerimaha and Jacob Wilson. But now, the sons of his oldest daughter are just two and three years old, so he has a while to wait.

In the meantime, he, like his grandfather before him, is making a name for himself in the art form. Earlier this year, he won two first-place ribbons for his Apache violins at the Southwest Indian Art Fair in Tucson, competing against hundreds of other artists. The fair was sponsored by the Arizona State Museum, which purchased both of his winning violins for permanent display.

The one thing you can’t ask Belvado to do is play his violins and sing the special songs. “I’ve heard it played, but before I got the chance to learn the songs, my grandfather passed away,” he says. “I know there are songs of horses and songs of butterflies, songs that are special and have to do with love, but I was left out of that.”

He sells his Apache violins at Indian art festivals—the annual markets in Santa Fe, New Mexico, in August and in Phoenix at the Heard Museum in March. He has found people of many cultures who appreciate their beauty and heritage. “It’s a piece of Indian art that can be cherished,” he says.

Belvado hopes he’ll be remembered for keeping alive an ancient Apache instrument. “We need to hold on to the past,” he says. “To me, it has special meaning, and it makes me happy to see someone appreciate it.”