Heading for the Hills 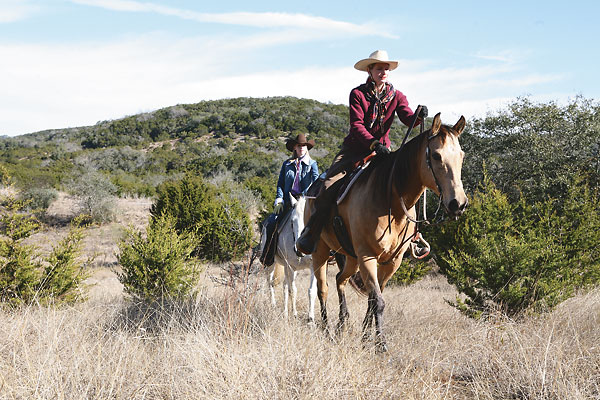 Riding along peaceful West Verde Creek on Comanche Bluff Trail, I could see in my mind’s eye the natives stalking a transplanted settler from Poland or nearby Castroville.

In the 1800s the region near Bandera, Texas, wasn’t as peaceful as it is today. Settlers from Poland and other non-Polish settlers, including a Mormon colony of about 250 people, moved to the region that now includes the Hill Country State Natural Area in the 1850s. Conflict arose between these pioneers and the aggressive Comanche. Prior to that time, the Comanches warred with the Apaches, driving them out of the area. Today, as I breathe in the crisp air and stare at a tall limestone cliff in this beautifully wild Natural Area, I understand why Apaches, Comanches, European settlers and later ranchers would fight for this land.

I was riding with Dianne Tobin of Hill Country Equestrian Lodge, a horse trainer and Bandera native, on her horse Molly, a grey, 12-year-old Appendix Quarter Horse. Dianne invites equestrian guests to stay in cabins located on her 100-year-old ranch property. Once owned by a British family who raised crossbred cattle, sheep and Angora goats, Dianne’s historic ranch harkens back to other area ranches of the time, like the Bar-O-Ranch, the ranch responsible for the existence of the Hill Country State Natural Area today.

The more than 5,300-acre Natural Area was formed when Louise Lindsey Merrick, owner of the Bar-O-Ranch which had been in her family since the 1940s, donated portions of her land over a seven-year period to the state of Texas. Merrick asked that the land be “kept far removed and untouched by modern civilization, where everything is preserved intact, yet put to a useful purpose.” In 1984, the park opened, and it has stayed true to Merrick’s request.

The Bar-O-Ranch itself had gone through several owners before the Merrick family took it over after WWII. The Bar-O-Ranch was diverse, raising sheep, goats, horses and cattle.  Its main business was mohair. In the park today, you may still pass the two-story ranch house, which dates to 1892. You may also come across other reminders of the area’s agricultural past: remnants of a molasses press, antique bailers and tractors, hand dug wells and windmills.

“Texas Parks is really trying to capture that post-WWII period to 1970s, when ranching was king in this area,” says Paul David Fuentes, park manager at the Natural Area. “Our job is to protect and preserve that time period, so you really get an opportunity, when you come to the park, to step back in time.”

With more than 50 miles of trails that wind along streams and cliffs, grassy fields and, of course, those Texas hills, the rugged Texas park offers riders a lot to explore. Various equestrian events and competitions are held at the park throughout the year. You’ll find equestrian camping in the park, should you bring your own horse along, but keep in mind that the campsite is primitive. You also have the option of lodging at one of the many area ranches in Bandera, the self-proclaimed “Cowboy Capital of the World.”

I visited two of the ranches during my stay: the Running-R Ranch and Hill Country Equestrian Lodge. From both of these ranches, I was conveniently able to horseback ride along trails to the park. On my two days of riding, I trotted along wooded paths lined with giant oak trees. In certain areas we had space to ride fast and loose, galloping alongside grasslands. At other times we carefully stepped over rocky trails, climbing up and down hills covered in varying shades of green. Still others found us encased in oak trees, alongside natural, clear springs, revealing a bottom of limestone. These wild parts of the park reminded me of a lost oasis, a secret garden of sorts.

We passed cacti, yucca and native grasses as we meandered up Twin Peaks, a trail with beautiful views of the surrounding area. From the top, I could see the Running-R Ranch in the distance, a reminder of how far we had traveled. Resting in the serene setting at a high point, I realized that the sun would soon set and my time in the park would be over. I relished the idea that, thanks to the foresight of rancher Louise Lindsey Merrick, the park would still be the same natural oasis the next time I came back.