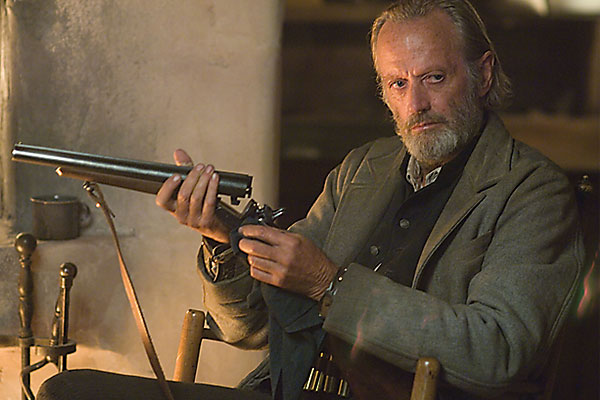 “You feel your belly fill up with blood. You’re bloated. You can’t move. You can’t breathe. You can’t die!” cried Clay Lomax, played by Gregory Peck, as he described the sensation of being gutshot in the 1971 film Shoot Out.

Peter Fonda, as bounty hunter-turned- Pinkerton guard Byron McElroy in the 2007 film 3:10 to Yuma, received the opportunity to test Lomax’s belief. During a payroll robbery, outlaw Charlie Prince (Ben Foster) shot McElroy in the gut using something akin to a .45 caliber single-action pistol. McElroy then underwent surgery and within hours was riding and fighting again. Is that scenario medically accurate to the 1880s?

Notwithstanding the relatively timely removal of the bullet and its failure to pass through and out, this slug would have damaged at least one vital organ and caused plenty of blood loss. The bullet weighed  about 230 grains and traveled 800-1,200 feet per second, not bad for the times and certainly capable of causing damage.

Also, the veterinarian retrieved the slug using non-sterile instruments. Undoubtedly, an infection would have set in within days, if not hours.

Short of a real miracle (the sparing of vital organs, minimal blood loss and no infection), McElroy would be incapacitated for at least six to eight weeks before he could perform even the most ordinary of bounty hunter chores. He would have required intensive nursing care, as his body could not handle nourishment of any kind for days, except for small amounts of water. Unable to consume food and adequate water, he would have developed severe dehydration and fever.

“Gut-shooting” an adversary was then, and is now, considered to be a particularly cruel act. In addition to the extreme pain associated with the injury, if one survived the initial blood loss but was left untreated, he would linger on for days to weeks while a consuming infection took its toll.

In modern times, after a quick trip by ambulance or helicopter, McElroy would undergo abdominal surgery to remove the bullet and repair his organs. Doctors would give him massive doses of antibiotics and a fluid replacement. They’d insert a suction tube through his nose into his stomach to allow his stomach and intestines to rest. Finally, they’d monitor his heart, lungs and other vital organs for complications.

As depicted in the movie, Byron McElroy probably would not have survived a gutshot wound in the 1880s, much less recover from one in a matter of hours. But I guess the filmmakers wanted to keep Peter Fonda in the movie just a bit longer.