What Have You Heard, Shane? 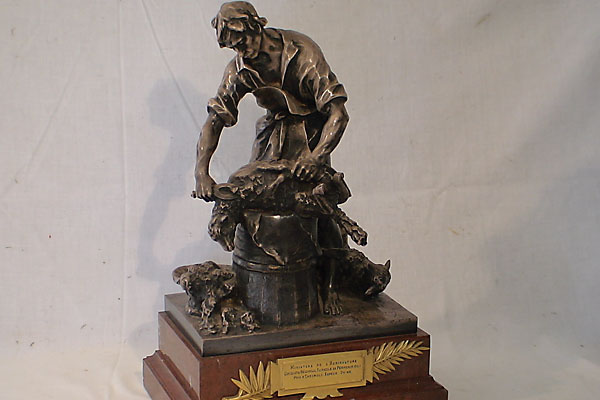 Jack Palance played a number of roles during his long career, but the characters of Jack Wilson, the sinister gunfighter in Shane (1953), and the crusty Curly Washburn in City Slickers (1991) are roles Western movie lovers will never forget.

It’s hard to imagine an actor famous for his steely-eyed stare and gravelly voice wielding a paintbrush, but Jack painted more than 700 canvases.  His love of art shone through at the estate auction held by Keystone State Auctioneers on October 12-14, 2007, at Holly-Brooke Ranch in Tehachapi, California.

Early in his career, Jack studied art first in Italy, then in the U.S., under the tutelage of Maher Morcos and Marilyn Bendell.

He was also an insatiable art collector. During his world travels (he spoke six languages), Jack bought art and antiques on almost every continent. “What he loved best about collecting was the quest,” says Elaine Palance, Jack’s second ex-wife. “When he saw something beautiful, he wanted to own it.”

After purchasing his 1,200-acre ranch in Tehachapi in the 1960s, he concentrated on Western art and antiques to furnish and decorate his new home and property. Perhaps his choices were influenced by the Western towns he’d visited when filming movies such as Shane (filmed in Jackson Hole, Wyoming), Young Guns and City Slickers (filmed in Santa Fe, New Mexico), and Arrowhead (filmed in Fort Clark, Brackettville, Texas).

City Slickers ultimately led him to an Oscar win for Best Supporting Actor. Jack is often credited as giving the funniest Oscar acceptance speech in history. The 73 year old dropped to the stage and did a few one-handed push-ups.

After the 87 year old’s death in November 2006, the interior of Holly-Brooke Ranch looked like a Western museum. Nearly a full year later, collectors bid on Sean Guerrero’s “Pegasus” made of chrome car bumpers (fetched $36,000) and sculptor Duchoiselle’s circa 1870 bronze casting of an Indian brave seated in a canoe ($16,000).

Daughters Holly and Brooke kept what little memorabilia Jack saved from his Western movies, with the exception of the boots he wore in City Slickers and a script of the movie. The two sold together for a mere $300.