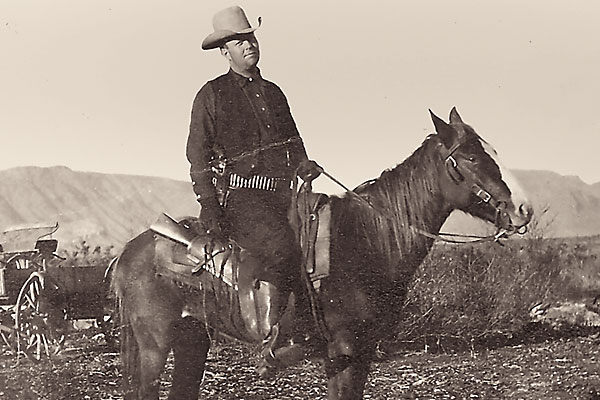 Frank Hamer wants to go home. The Texas Ranger has just testified at the Callahan County Courthouse in Baird, Texas, in a murder trial and the case has been continued. Two men, waiting by a drugstore, warn Frank not to pass through Sweetwater on his way home—men are waiting there to kill him.

Frank’s traveling companions are his wife Gladys (who is three months pregnant), his brother Harrison and a witness in the court case, Emmett Johnson. He points the car toward their home, Snyder.

As Frank drives by a second-story building in Abilene, he spots a lawyer friend of Gee McMeans (a former Texas Ranger and sheriff) staring down out of his office, smiling a smug smile.

At about 1:30 p.m., on the approach to Sweetwater, a tire on the Hamer car goes flat. Frank pulls into a garage located on the southeast corner of the town square.

Harrison and Emmett head across an alley to “see a man about a horse” (go to the bathroom). Gladys remains in the car.

Frank enters the empty garage. Finding no one inside, he starts to exit when Gee McMeans jumps out from behind a door and shoots Frank point-blank, yelling, “I’ve got you now, God damn you!”

The bullet drives Frank’s watch chain deep into his left shoulder, incapacitating his normal gun hand. He grapples with the gunman with his right hand, but McMeans gets off another shot, the second bullet tearing into Frank’s leg.

Gladys is in the car when she spots a man with a shotgun coming toward Frank on the street. She grabs a .32 pistol off the seat and fires at the shotgunner, but her shot misses. The man, H.E. Phillips, a known gun toter in Texas, squawks and ducks behind an automobile. Every time he tries to rise, Gladys sends another bullet his way, until she empties the magazine. As she ducks down in the seat to reload, the shotgunner runs toward Frank.

Frank is still wrestling with McMeans and starts slapping the shooter in the head with his open hand. From the corner of his eye, Frank sees the shotgun shooter approaching. McMeans breaks free, the shotgun roars and the concussion of the blast staggers Frank as he falls to his knees.

“I got him! I got him!” the shooter yells in triumph, only to see Frank lunge to his feet. (The blast, fired from two feet away, shredded Frank’s hat, missing his head by inches.)

McMeans and the shotgunner run toward a waiting car. Frank runs after them, stum-bling, but regaining his feet and pulling a gun with his right hand. He reaches the shooters’ getaway car just as McMeans fetches a pump shotgun from inside. As he turns, Frank puts a bullet through his heart, killing him.

Behind the vehicle, the shotgunner crouches beside McMeans’ body, the smoothbore still in his hands.

His brother Harrison runs up, raising his rifle toward the fleeing man. Frank knocks the barrel skyward as Harrison squeezes off the shot. “Don’t shoot him in the back! Leave him!”

Gladys runs up and takes her husband around the waist, his blood oozing onto her dress. Several other men run toward the scene.

Plenty of Motives All Around

In June 1917, one of Bill Johnson’s ranch hands was gunned down by a dry gulcher, hired by a vicious group of rivals from Abilene who allegedly coveted Johnson’s ranch.

Frank arrested the shooter of the ranch hand. He’ll became the state’s star witness against the shooter and his Abilene crew at the trial in October. That news brought on his head a $4,000 bounty, which also applied to all the others involved in the murder case: Frank’s brother Harrison, Bill Johnson and Scurry County Sheriff W.E. Merrill.

The Abilene Crew hired Gee McMeans, a local lawman gone bad, to kill the Hamers. He first tried to goad Harrison into a gunfight inside a hotel lobby in Post City, but Harrison was unarmed and declined the invitation. McMeans, his two guns bristling at his waist, walked away laughing.

Frank rode out to the killer’s ranch and told the cowboys there he’d get them for sure, if they tried to do in his brother.

That September, McMeans and several others laid in ambush on the road between the town of Snyder and Johnson’s ranch. As Frank and Harrison approached in a car, Frank saw a gray wolf and stopped the car. He got out firing. The ambushers, thinking he was aiming at them, scattered and ran.

Frank and Harrison continued on into Snyder, where they cornered a couple of the suspects. Frank knocked one cowboy down, while Harrison slammed another cowboy’s face into a building. Frank told the bad guys to go for their guns, but they wouldn’t do it. He ended up kicking one of them all the way down the street.

Don’t Mess With A Pistol-Packing Mama From Texas

Gladys Johnson married Ed Sims when she was 14. Two kids and nine years later, the two got into a nasty divorce. The case was assigned a July 25, 1916, court date in Post City, Texas. Everybody came to town heeled.

Gladys and Gee McMeans (kin to Sims) ran into each other in a hallway of the Algerita Hotel the day before the hearing. They argued and both pulled guns.  Although Gladys’ gun did go off, lawmen managed to break it up before anyone was hurt. The court granted the divorce later that year.

Sims remarried, but he became more and more bitter toward Gladys and her family.  On December 16, 1916, while in Snyder supposedly for a visit with his girls, Sims ran into Gladys’ father Bill Johnson. The two of them got into an argument. Sims—a Garza County deputy—pulled a gun, but Scurry County officers disarmed him.

The next morning, Sims asked Sheriff W.E. Merrill to intercede and help get the girls into Snyder for the visitation. The sheriff agreed and convinced Bill Johnson to agree as well.  Gladys said she’d have the girls in town by 12:30, although she put her automatic pistol in her purse as they all headed out.

In Snyder, Gladys’ brother Sidney went looking for Sims with a shotgun, angry that the man had pulled a gun on his father.  Sheriff Merrill persuaded him to cool off and go into the bank (which Bill Johnson supervised).

When Gladys pulled up for the 12:30 exchange, Sims came out to the car and leaned inside to kiss the girls. The girls refused to go with him.  Sims demanded that they come with him and reached inside to pull out their bags. He grabbed one of the girls and tried to pull her out.  Infuriated, Gladys pulled her automatic and shot four times, hitting Sims in the leg and inflicting a flesh wound in his chest.

At the sound of gunfire, Bill and Sidney exited the bank. Sims—who was apparently unarmed—staggered away from the car. Sidney fired a load of buckshot into Sims’ back. He died in a nearby drugstore a few minutes later.

Police charged Gladys and Sidney with murder and released them on bail.  While awaiting trial, Gladys met Frank Hamer and fell in love.

Given this history, Gee McMeans had ample reason to despise both the Hamers and the Johnsons.

The gunfight began while a grand jury in Sweetwater, Texas, was in session. The jurors ran to a window and witnessed the end of the fight. When it was over, Frank Hamer—still severely wounded—appeared before the panel and gave his version of events; the grand jury ruled that Gee McMeans’ death was “justifiable homicide.” Only then did doctors
treat Frank’s injuries.

Frank continued to work in law enforcement and security work for another 32 years. He died in Austin in 1955 at the age of 71. During his life, he reportedly participated in more than 50 gunfights, during which a couple dozen baddies were killed. His most famous? The shootings of outlaw sweethearts Bonnie and Clyde in 1934. During his career, Frank was wounded 23 times; twice he was declared dead.

Frank Hamer Jr. was still in his mother’s womb during the gunfight. He was born in April 1918 in Pasadena, California, where his folks had gone for an extended vacation (Frank Sr. became good friends with cowboy star Tom Mix during the trip). Frank Jr. followed in his dad’s footsteps, becoming a Special Ranger after WWII. He later became a pilot for the Texas Fish and Game Commission. He died in 2006 at the age of 88.