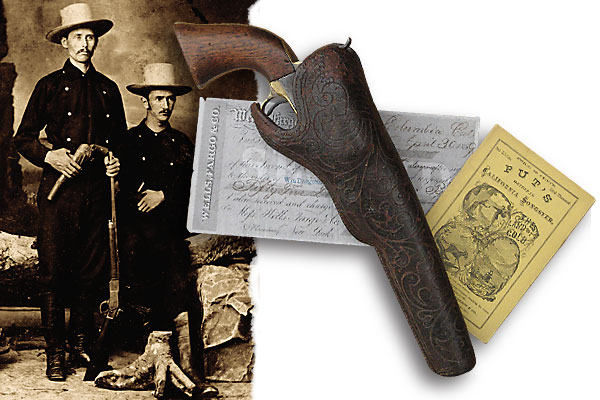 Sleek scabbards housed frontiersmen’s six-guns from the days of the California Gold Rush through the closing of the frontier.

For centuries, pistol holsters were strictly utilitarian in design, often consisting of little more than a leather pouch for housing the gun. By 1850, many holsters produced for the new caplock revolvers, such as Col. Colt’s offerings of the day, were constructed with flap covers, providing protection from rain, dirt and other debris that might jam the gun’s action mechanism or render a percussion cap useless.The lawlessness prevalent in the overcrowded mining camps of California’s Mother Lode created a need for gunleather that offered quicker access to one’s pistol than afforded by the flapped holsters. To prepare against possible trouble, gun toters began folding back these protective flaps—or cutting them off altogether.Having set up shop in the bawdy and bustling city of San Francisco, pioneer saddlers such as Main & Winchester (est. 1849) and L.D. Stone Company (est. 1852), along with other “Yankee” artisans of the California Gold Rush, saw firsthand, the need for such gunleather. What resulted became the first truly Western holster, the “California Pattern.”

Custom crafted for a particular revolver, such as Colt’s Dragoons, 1849 Pockets or 1851 Navies, these early scabbards featured deep, form-fitted pouches with lower edges contoured to the outline of the gun’s loading lever and trigger guard. Gunleather artisans often cut the fronts and backs of Holster tops, giving them an “S”-shape throat that exposed the gun’s grip, hammer and trigger guard for easy access. Many holsters featuring partial or full flap coverings, and straight or arched throats, did not have a cutout area for the trigger.  Most had a sewn-in toe plug or a brass or silver muzzle cap, and a belt loop that was either stitched or riveted to the reverse side. Regardless of detailing, these general features combined to produce a sleek and handsome, silhouette-shaped belt holster that married graceful form with function.

The popularity of this West Coast holster pattern quickly spread eastward, throughout the Western territories. Other gunleather makers, like Denver, Colorado’s E.L. Gallatin, turned out superb examples of the style. By the Civil War, the “California Pattern” holster had become a generic holster design in use nationwide.

Get Your Own Slim Jim

Quality replicas of the “California Pattern” holsters, with or without the period floral carvings, are available at these top gunleather suppliers: