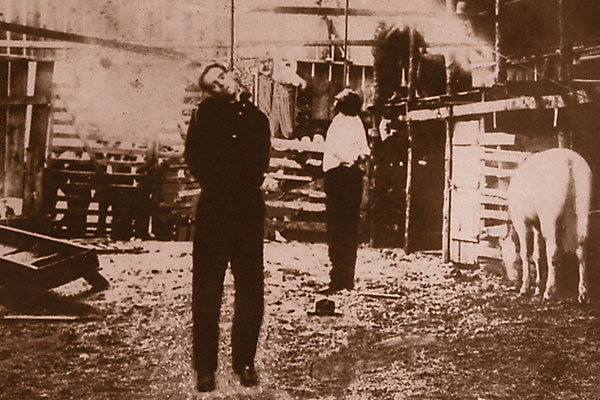 A two-year-old boy loses his father in 1908—his very famous father, Pat Garrett, responsible for killing the notorious Billy the Kid.

When Jarvis Garrett grows up, naturally he is curious to find out more about his father … and wants to get to the bottom of who killed him.

In his early 50s, Jarvis marks his father’s death site, pouring wet concrete into which he scratches “P. Garrett” and “Feb. 1908.” In the concrete, he places a stone upon which his mother had carved a cross.

Twenty years will pass before Jarvis reveals who he believes killed his father. On May 6, 1978, at the V-O Ranch annual invitational gun show, 72-year-old Jarvis confides in Buck Westbrook and his friend, Bob Eder, a highly regarded Colt collector.

Sitting among priceless Western artifacts and antiques, and overlooking hundreds of square miles of grand old Texas brightened by a beautiful sunset, Jarvis first shares a commonly accepted story of his father’s death.

At a spot in the foothill area some miles from Las Cruces, a point sheltered from view by hills on all sides, Pat Garrett was shot to death.

Brazel and Adamson left the body where it fell and rode to Las Cruces where Brazel turned himself [over] to Sheriff Felipe Lucero. Brazel told Lucero that he and Garrett got into an argument over the lease; Garrett went for his shotgun and Brazel shot him twice. Adamson verified Brazel’s statement.

W.W. Cox, a prominent rancher, helped raise the $10,000 bond money to free Brazel. Cox had been trying for years to obtain the water rights to the Garrett ranch. On April [19], 1909, Brazel was brought to trial and acquitted the same day.

Jarvis was [almost three years old] at the time his father was killed, so his death did not leave a traumatic impression on his life. But with all the controversy surrounding Pat Garrett’s death, Jarvis was determined to find the truth. Through many years of investigating the facts that were available and interviewing everybody associated with this time in history, Jarvis [felt he knew] the truth.

The investigation made at the scene and the autopsy that followed [threw] a completely different light on the subject. The investigation showed that Pat was in the process of relieving himself behind the left rear wheel of the buckboard when the fatal bullet hit him. Dr. W.C. Field, who performed the autopsy, also proved that the fatal bullet entered the back of the head and came out over his right eye. Dr. Field was not required to submit a written statement concerning the autopsy for the trial. This in itself was a farce.

Pat’s shotgun was found next to his body, still broken in two separate parts and in the carrying case. The shotgun was useless.

When Jarvis returned from Venezuela in 1958, he went to Las Cruces for a visit. He ran into Will Isaacs at Jim Smith’s supply store. Isaacs was present when Brazel surrendered to Lucero. After the arrest, Isaacs went to the scene of the killing. He offered to take Jarvis to the scene and show him what he had found that day.

When Isaacs found the spot that he had marked with a round stone, he showed Jarvis where his father had fallen. He then retraced the circle made by the buckboard wheels when the horses were frightened and veered to the left. A man sitting on the seat in the buckboard firing shots would have made the horses react in this manner. The trajectory of the bullet that entered Garrett’s head could only be caused by a gun fired from that position.

Jim Miller disappeared from Las Cruces after the killing. It was found out that he was not a rancher or cattleman but a hired killer. He was lynched about a year later in Ada, Oklahoma, for the murder of a prominent citizen. The murder had similar circumstances to those of the Garrett assassination.

Wayne Brazel, following a celebration for his acquittal at Cox’s ranch, disappeared. No one really knows what happened to him. His usefulness as a tool in this conspiracy was ended.*

Jarvis became convinced that Adamson killed his father, but he offered no motive for him doing it. He did note that Adamson was soon thereafter convicted of smuggling Chinese into the States. Whether he thought a motive rested therein, we do not know.

Would someone really kill Pat so his land could be acquired to hide illegal aliens??The theory has traction.

Much had changed since Secretary of State William H. Seward stated in an 1871 New York Times article that the essential element of commerce between China and the U.S. was “the free emigration of the Chinese to the American [continent].” At that time, industrialists credited the Chinese for constructing the Central Pacific Railroad, which had a labor force of 90 percent Chinese immigrants.

After California’s economy took a hit between 1873-78, Americans began to think the Chinese prosperity was to blame. In 1882, Congress forbade further immigration of Chinese laborers. Six years later, Chinese laborers who had left the U.S. to visit their families were not allowed to return to the States. By 1894, the exclusion laws were softened a bit to allow laborers to return if they could prove they had immediate family living in the U.S. or had debts owed them of at least $1,000.

In this hostile environment, the smuggling of Chinese aliens became quite a profitable enterprise. Chinese were transported to Juarez, Mexico, where they learned English, before they were sent to El Paso, Texas, to be fully assimilated.

A year before Pat’s death, federal agents were alerted of a ring based in El Paso that smuggled Chinese laborers to work at the mines in Colorado. A federal prisoner at the county jail in Las Cruces had tipped off Dr. W.C. Field about the smugglers. He, in turn, passed along the report to U.S. Marshal Creighton Foraker. Chuck Hornung reported this in his article about the Fornoff Report published on the Western Outlaw Lawman History Association?website. (New Mexico Capt. Fred Fornoff investigated Garrett’s murder.)

How did Pat figure into the equation? His Bear Canyon ranch property was a perfect hideout as it was remote yet accessible, with a source of water.

Before the year 1908 was over, Carl Adamson, who had sat next to Pat on the buckboard, was convicted of smuggling Chinese laborers into the U.S. from Mexico on December 14. Mannie Clements died that December, in the wine room of Tom Powers’ tony Coney Island Saloon. (His connection to Adamson? Allegedly hiring brother-in-law Killin’ Jim Miller, who was also kin by marriage to Adamson, to murder Pat and let Brazel be the fall guy.) Hornung reported that El Paso newspapers hinted Clements’ killing was payback for murdering Chinese immigration agents.

The theory that Adamson shot Pat so he and the other smugglers could get Pat’s land to hide their illegal Chinese is one of many surrounding Pat’s death. When one recognizes the vast spaces of southern New Mexico, where it is even difficult to stop illegal entry today, the theory does lose quite a bit of steam.

To this day, Pat Garrett biographer and expert Leon Metz remains steadfast in his belief that Wayne Brazel did kill Pat just like he confessed. In his 1974 biography, he wrote, “There were no conspiracies, no large amounts of money changing hands, no top guns taking up positions in the sandhills. It was simply a case of hate and fear erupting into murder along a lonely New Mexico back road.”

A video of the shooting is about the only proof that could settle the identity of Pat Garrett’s killer once and for all.

What we do know is that Pat was desperate in his last days of life. He wrote to his friend, New Mexico Gov. George Curry, “I am in a hell of a fix. I have been trying to sell my ranch, but no luck. For God’s sake, send me fifty dollars.”

When Pat went to settle the ranch leasing agreement with Brazel and Adamson, he carried that uncashed check. It was on his body, found at the desert crossroad Alameda Arroyo, a few miles east of that City of the Crosses, Las Cruces.

The Editors thank Buck Westbrook for sharing with us his transcript of his interview with Jarvis Garrett.