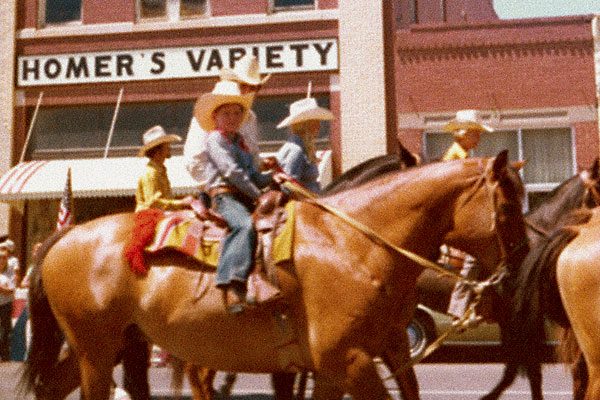 Brent Demmitt grew up with Dalton Days in his hometown of Meade, Kansas, and remembers “it was everything to me—it was always a big deal, especially to a kid like me who wanted to be a cowboy.”

Some 45 miles from Dodge City, Meade was home to Brent’s heroes: the cowboys who re-enacted the infamous Dalton Gang. The original bank/train-robbing brothers—Bob, Emmett and Grat—hid out at their sister Eva’s house when they came to Meade for supplies. J.N. Whipple built the house in 1887 for his bride, and the gang benefited from the rain wash that allowed undetected access to the home from the barn.

Brent still laughs as he recalls how one year, the Dalton Gang re-enactors rode their horses through the Lakeway Hotel (formerly the 1926 Meade Hotel) in downtown that “sits at the only stoplight in the whole county.”

By Brent’s teenaged years, Dalton Days had turned into a phony affair—motorcycles and pickups replaced horses, and the real cowboys sat it out to make room for “guys who thought they were cowboys because they wore boots.” When Brent returned from college in 1997, the local folks no longer celebrated Dalton Days.

“I was told they’d started having them irregularly, every other year or so, and then just stopped having them at all,” he says. He didn’t miss the phony version that he felt had been an embarrassment, but he sure missed the Dalton Days of his youth.

Brent took over the family’s cattle feed lot and started staging rodeos. Then he convinced his girlfriend to move to Meade, where they married in 1998, and Susan became the county’s economic development director. “I’d tell her about the old days and how we had these great Dalton Days, and she asked ‘Why can’t we do that again?’”

So in 1999, this 20-something couple did. They revised the tradition. To raise the money to stage the festival, Susan tackled the big corporations that conducted business in the area, while Brent talked with local businesses. “Not one business turned me down,” he says.

With eager, young volunteers like Brent and Susan, others in town enthusiastically joined the effort. “I remember one night our local historian came over and dropped off a box of stuff from the old Dalton Days and said, ‘It’s all yours.’”

In fact, that is why the festival had died on the vine in the first place, says Carolyn Meredith, a community leader and member of the historical society board. “It’s all volunteer work for a festival like this, and people got tired of doing it.”

Dalton Days needed exactly what the Demmitts offered: enthusiasm, time, dedication and hard work. “Susan is an incredible organizer,” her husband brags. “I put on the rodeo and helped with some of the other events, but Susan was the organizer and got everyone involved.”

In 1999, that first year of reviving the Dalton Days Wild West Fest, they had a rodeo, parade, dance and even a Riders in the Sky concert held at the local football field.  “It was the best Dalton Days we ever had,” Brent says. They repeated their efforts the next two years before moving to Arizona, where Brent is now a horse trader and Susan is a land use consultant.

The best news is that Dalton Days continues to thrive in Meade every June. Attendees can enjoy re-enactments and a gunfight competition. In 2007, the Reenactment Guild of America officially sanctioned the event and handed out prize money.

“We’ve got it all,” the planning committee claims. “We have good food, races, Old West vendors, great music, games for the kids and adults, living historians, gunfights, a cowboy ball and even a cowboy church. It will be a weekend of the rights, sounds and tastes of the Old West.”

When festival time comes, the Meade Fire Department enters the park with sirens blazing for one of the favorite events, the hand-cranked ice cream competition. First graders race for prizes on stick horses that Meade High School students built in their building trades class. The kids even join in on the parade, along with the floats, antiques and horses. Two years ago, True West’s own Bob Boze Bell was the grand marshal of this parade.

“It’s real important to keep history alive,” says Meredith, who adds how happy she was with this year’s festival.  The annual event supports itself and helps support the Dalton Gang Hideout Museum, which has operated since 1941. The museum is in the barn of Eva Dalton Whipple’s place. Nearby is the small house where her bandit brothers hid out, and it’s open for tours.

Brent and Susan haven’t been back for the festival the past couple years, but they’re proud they helped revive and save it, and have fond memories of the last festivals they attended. “I loved that everyone pitched in and the town loved it and everybody had fun,” Brent says. “As a community event, it really brings the community together and everybody shows up for it.”

Thanks to Brent not letting his happy childhood memory get left in the past, every summer, this town goes all out to commemorate its piece of Western history.