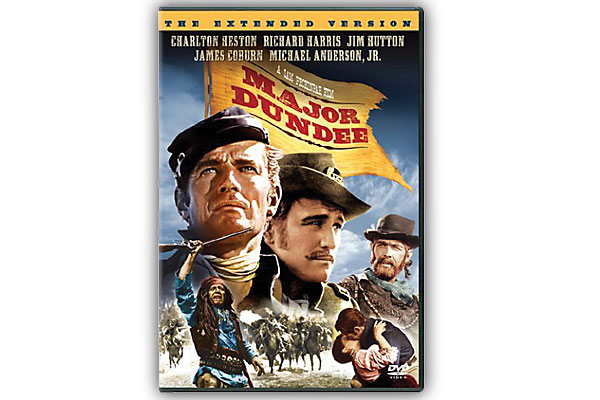 Sam Peckinpah’s devoted fans have never been able to decide whether Major Dundee was a masterpiece mutilated by an unsympathetic studio or the noble failure of an undisciplined genius. It’s a toss-up, really, because what might have been one of the greatest Westerns of the second generation was damaged going in and damaged coming out.

Around the time Peckinpah’s second movie, Ride the High Country (1962) came out, Harry Julian Fink’s treatment for Major Dundee, the story of a disgraced cavalry officer who drives his men on a long hazardous trip into Mexico in pursuit of a band of Apaches,  fell into the hands of Charlton Heston and producer Jerry Bresler.  When they started hunting for a director, it took a screening of Ride the High Country to point them to Peckinpah.

The movie and its long, troubled production has filled books and several scholarly web pages. Much of the discussion points to how Columbia Pictures dissected the film, and the misconduct and mismanagement on the set.

In 2005, a version of the movie was released to DVD that restored 12 minutes of footage and attached a far better musical score. The film is still missing chunks, but we now have a version close enough to the mark to answer the question of whether Major Dundee would have been a great Western had Peckinpah been given his promised budget and/or final cut.

The answer is no. The picture has a lot going for it, it’s full of terrific ideas and it gets a bit of a jump on the Spaghetti Westerns that were just beginning to emerge at the time, but it never becomes a truly epic statement on the traditional cavalry film.

Still, it’s a ferociously ambitious film that anticipates some of Peckinpah’s future successes, especially The Wild Bunch; it also points a bony finger toward his future failures, of which there were far too many.

The one drawback to the 2007 reissue is that some extras from the 2005 package have been pulled (the jacket on my copy still promises extended and deleted scenes that aren’t on the actual disc). Considering the work that went into restoring and rescoring this disc, and adding the supplemental material on the earlier go-round, whittling it down like this makes Sony look pretty cheap.