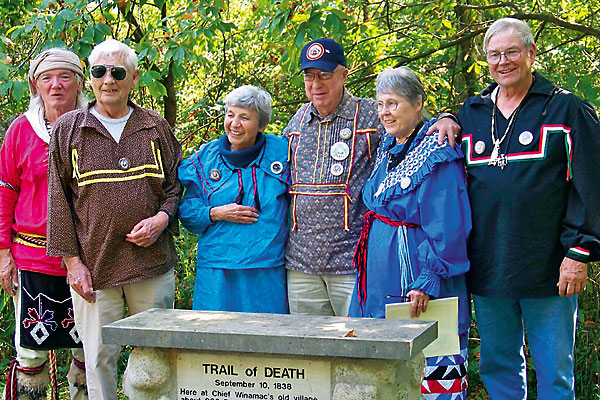 They were simply in the way, holding land that emigrating farmers wanted as their own.

So the Potawatomi were rounded up and forced to leave their ancestral lands in Indiana, then one of the most western of America’s 28 states.

They started walking in September, moving by 8 a.m. every day. Men, women and children—a few on horseback, the sick in a wagon bringing up the rear, but most on foot—walked until 4 p.m., when they were finally allowed the only meal of the day, cooked from the often-tainted meat and flour they had been given.

For two months, 859 Potawatomi marched at gunpoint from the wooded hills they’d known all their lives to the flat, treeless Kansas Territory. Forty died along the trail. Everyone else arrived in winter, finding no shelter, so they built wigwams and log cabins to live in. The only kindness they received came from those at the Sugar Creek Mission.

The year was 1838, but history doesn’t remember it for this Trail of Death, as the removal of the Potawatomi came to be known. The year is most known for the Trail of Tears that saw the march of 15,000 Cherokees from the Smoky Mountains to Oklahoma, with 4,000 dying along the way.

While students of American history are aware of the Cherokee displacement, the story of the Potawatomi has hardly been a footnote. Their plight would be forgotten to this day if a dedicated Indiana woman, Shirley Willard, hadn’t devoted her career to preserving its stories. As president of the Fulton County Historical Society for 30 years, from 1971 to 2001, Shirley spent much of her time documenting what she calls a “sad chapter” in Indiana history. “Sometimes you wonder about the vision of our leaders, and if they know right from wrong, and what they’re doing,” she says.

Bringing the Potawatomi’s suffering to light all began with a bicentennial project in 1976, as Shirley convinced the Fulton County Historical Society to honor the inhabitants with an event then-called the Trail of Death Rendezvous. Her son, Allen, earned his Eagle badge by leading his Boy Scout troop to erect a historical marker at the site of the second night’s camp, where the first Potawatomi died. In 1977, the annual event (held in September) was changed to the Trail of Courage Living History Festival.

In 1988, the 150th anniversary of the march, Shirley helped create the Trail of Death Commemorative Caravan with Dr. George Godfrey, a descendant of the tribal members who became U.S. citizens in 1861, known as the Citizen Band Potawatomi. Every five years, the caravan retraces the route from Indiana to Kansas. Each year, a Potawatomi family who had ancestors on the Trail of Death is honored. So far, 74 markers have been erected all along that trail. Shirley is particularly proud that more than 30 Boy Scouts have earned their Eagle badges, and several Girl Scouts their Gold badges, in erecting these markers.

“It is our hope that people will stop to read them and say a prayer for peace for all mankind, that we may get along as real friends and family, and take care of each other as we travel through life on this planet earth,” Shirley states.

That spirit is found along the caravan route. “Every day, a group along the way has a meal waiting for us,” she says. Sometimes, it’s a meal that would have delighted the Potawatomi: venison stew, fruit cobbler, fry bread and dried corn soup. One year, the caravaneers lectured at 12 schools along the trail so children could learn their regional history.

“The Trail of Death caravans and dedications of historical markers have been a time of healing and an opportunity to appreciate the Indian heritage of America,” Shirley says. She and her associates have convinced four state legislatures—Indiana, Illinois, Missouri and Kansas—to declare the route a Regional Historic Trail. And she’s edited, with the help of Susan Campbell of the Citizen Potawatomi Nation, the 2003 book, Potawatomi Trail of Death.

“The 1838 Trail of Death was a terrible experience, and it remains a bitter memory for many of the Potawatomi, as do the other removals of other American Indians from Indiana and other states,” she says. “My committee has given so much of its time and energy and prayers to these commemorations to attempt, in some small way, to atone for the injustice and sadness of the past, and to make known that we wish the Trail of Death had never happened.”

Shirley’s reflections on our nation’s role in this tragedy allow her and countless others to awaken to a morning anew with hope; they understand fully the Maya Angelou maxim: “History, despite its wrenching pain, cannot be unlived, but if faced with courage, need not be lived again.”

Click here to send donations to pay for historic highway signs for the Potawatomi Trail of Death.