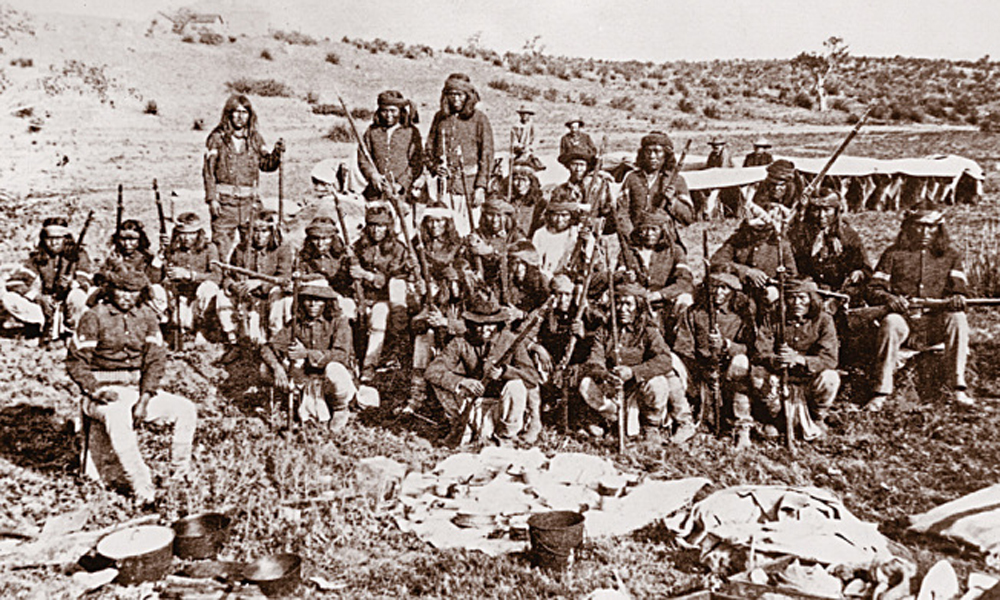 In January, 1902 when Tom Horn was being interrogated by U. S. Deputy Marshal Joe Lefors regarding the killing of young Willie Nickle he boasted that he killed his first man when he was twenty-six referring to him as a “coarse son of a bitch.” One version of the story says it was over a Mexican prostitute. However, this was another example his tall tales. Larry Ball’s excellent book Tom Horn: In Life and Legend and in the footnotes he says “Presumably Horn was referring to Mauricio Corredor, the Chihuahuan militia officer, who was killed by Apache scouts in Mexico in January, 1886. At the time Horn denied that he killed Corredor. Army officers credited Dutchy, an Apache Scout, with this deed.”

Fast forward sixteen years to 1902 and Horn was telling a different story.

To get the skinny on what happened in Mexico I went to Ed Sweeney’s From Cochise to Geronimo and Paul Hutton’s The Apache Wars.

Horn’s accomplishments in the Apache Wars were great and the records show it. It’s unfortunate that in his autobiography he unnecessarily embellished his role. The facts prove Horn was the real McCoy.

The incident with Corredor occurred when one of General George Crook’s most valued officers, Captain Emmett Crawford, was treacherously shot and killed while waving a white flag at a peace parley.

On morning of January 11th, 1886, a small force of U.S. troops and Apache Scouts encountered a company of 128 Tahrahumari militia under the leadership of Major Mauricio Corredor on the eastern slopes of the Sierra Madre at Espinosa del Diablo (The Devils Backbone). The major was known far and wide as the man who killed the great Apache leader, Victorio at Tres Castillos in October 1880.

Crawford’s men had just captured a hostile Apache camp the day before and were preparing to return to Arizona. That morning Major Corredor and his militia arrived on the scene and without warning, opened fire on the soldiers and scouts.

Crawford in full military uniform, believed the firing was a misunderstanding, ordered Horn to investigate. Crawford, waving a white flag and Lt. William Shipp, Lt. Marion Maus followed a few yards behind. They identified themselves as Americans and soon the shooting ceased however, both sides remained on edge. There was no love lost between the scouts and the Tarahumari militia.

During the exchange of gunfire the American forces had restrained their firing causing Major Corredor to believe they were short on ammo. The Americans didn’t know it at the time but the major had treacherous intentions.

The two sides met in an open area. Horn was about a hundred feet in front of the officers. All three Americans were unarmed. Corredor and his nine men were all carrying weapons. Corredor was carrying the trophy rifle he received for killing Victorio.

Horn also waving a white flag was ignored by Corredor who brushed past him and when he was just a few feet from the officers he paused and looked around nervously. Standing behind the officers on both sides were Tarahumara behind Corredor and behind the Americans, the Apache scouts.

There was considerable “trash talk” going on between them causing the officers on both sides to call for restraint. Crawford jumped up on a tall rock and waved his white flag again. One of Corredor’s peace party, the one designated to shoot Captain Crawford, took aim and fired, hitting the captain in the forehead. He would die a slow, painful death several days later.

Corredor smiled at Horn then fired, hitting him in the arm. The firing continued on the Americans but none of the others were hit.

The Chiricahua Apache scouts bore most of the fighting that day and bravely held their ground. Their heroism would be told around Chiricahua campfires for many years to come.