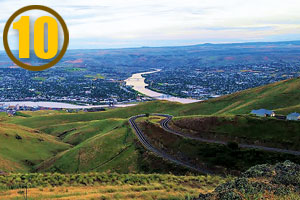 As you might deduce from its name, Lewiston focuses its history squarely on the two young captains who led one of the most extraordinary explorations of all time.

Meriwether Lewis and William Clark and their celebrated Corps of Discovery camped overnight on an island near the confluence of the Snake and Clearwater Rivers located near what are today the sister cities of Lewiston, Idaho and Clarkston, Washington.

A guided walking tour of historic downtown Lewiston is one of the best ways to get an overview of the area.

Among the many historic sites in the region you’ll find:

The Confluence Center, located atop the levee in Lewiston, where a marker notes the expedition’s 1805 campsite. You will find several open-air interpretive displays nearby.

And you can’t miss Nancy Dreher’s striking sculpture Tsceminicum (“meeting of the waters”), which expresses many elements of Nez Perce lore.

The Lewis and Clark Timeline at the Hells Canyon Resort Marina in Clarkston depicts just some of the adventures the expedition encountered during their journey.

The Lewis and Clark Discovery Center at Hells Gate State Park features several interpretive displays, as well as information about the expedition’s difficult traverse of the Bitterroot Mountains.

You’ll find the Nez Perce National Historic Park, with 24 separate interpretive sites on the history and customs of the Nez Perce Tribe, about 11 miles southeast of Lewiston.

For a different perspective, take a jet boat excursion into Hells Canyon, North America’s deepest river gorge, to learn a little about sunken steamboats and ancient petroglyphs. Your guides will also point out some of the area’s mining claims, historic river crossings and jaw-dropping geological formations.