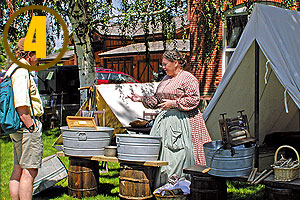 In 1892, Buffalo was not much more than a haven for the renegades and rustlers who controlled, well, pretty much everything around: local politics, courts and even juries.

At least that was the excuse of a group of cattle barons who banded together, with a long list of men they intended to hang or shoot, to invade the county in early April 1892.

So began the Johnson County War, one of the most infamous clashes of the Old West.

Today Buffalo, with a population of around 4,600 people, is the peaceful seat of Johnson County, nestled at the base of the scenic Big Horn Mountains.

The town was founded in 1879, just a few years before the War, on a buffalo trail that forded a tributary of the Powder River.

Many of the Old West’s best known characters passed through—or stayed in—Buffalo over the years, including Calamity Jane, Tom Horn, Teddy Roosevelt and, of course, “Buffalo Bill” Cody himself.

Owen Wister apparently based many of the characters in The Virginian (generally considered the first Western novel) on some of the people he’d met while staying at the Occidental Hotel, which has been painstakingly restored.

Learn more about Buffalo’s storied past at the Jim Gatchell Memorial Museum, originally a pharmacy that Gatchell opened in 1900.

Over the years Gatchell received a number of gifts from cowboys, settlers and Indians alike. As his collection grew, residents started giving him all kinds of mementos related to the region’s history. After Gatchell’s death in 1954, his family donated his collection to the county.

Members of the Living Historians of the Wyoming Frontier often appear at the museum, giving visitors a look into the lives of blacksmiths, gamblers, laundresses, cavalry officers and other everyday people living on the late 19th-century frontier.

You’ll find the TA Ranch Historic District a little south of Buffalo. Look for bullet holes in the old barn, where the last desperate standoff of the Johnson County War took place.