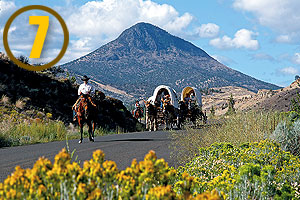 Lewis and Clark called it “Rock Fort” when they camped there in the fall of 1805. It was a good spot, so they stayed there again on their return journey the following spring.

The historic camp is now on the Riverfront Trail in The Dalles, the original end of the Oregon Trail.

The area’s modern history began in 1838, when missionaries established the Wascopam Mission near Pulpit Rock.

Thousands of immigrants passed through the vicinity during the Great Migration of 1843.

But not until after the Whitman Massacre of 1847 did the military move into the area. Its stronghold was first called Camp Drum, but soon became Fort Dalles. It was an important base of operations through the Cayuse and Yakama Indian wars.

The fort’s Surgeon’s Quarters, built in 1856, now holds the Fort Dalles Museum, one of Oregon’s oldest.

Between 1850 and 1860 the area around the outpost exploded into Dalles City, a ragtag “town” of 10,000 or so settlers, soldiers, missionaries and prospectors, many of whom lived in tents.

The Wasco County Courthouse, built in 1850, housed the sheriff’s office, three jail cells and a courtroom, which was often used as a public meeting place. It was the first courthouse west of the Rocky Mountains.When you visit, be sure to check out the original leg shackles and the ball and chain used to restrain prisoners.

The Columbia Gorge Discovery Center and Wasco County Historical Museum at the Columbia River Gorge National Scenic Area trace the history of the region from the ice ages through the arrival of the pioneers. The vistas are pretty spectacular, too.