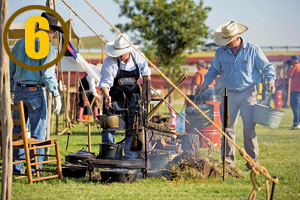 It’s tough to have a more historic foundation than Lubbock.

It was, after all, named after Thomas S. Lubbock, a man who took part in the 1835 siege of San Antonio de Bexar and served as a Confederate officer in the Civil War.

The modern city came about in 1890, when two smaller towns-—Old Lubbock and Monterey—united.

Although it had just 50 residents to start with, Lubbock became the county seat less than a year after being established. It incorporated in 1909, the same year the first train pulled into town.

The National Ranching Heritage Center (NRHC), a museum and historical park, houses nearly 50 authentic structures dating back to the 1700s. The 27.5-acre facility was created specifically to preserve the history of pioneer life and ranching in North America.

Structures from some of the West’s best-known ranches have been carefully relocated to the NRHC. Each building reflects the geography of its original location, often by the materials used in its construction.

Strolling about today you’ll marvel at historic windmills, barns, corrals and pens, as well as a bunkhouse, a one-room schoolhouse and a blacksmith shop. There’s even a locomotive and a depot.

Homes range from a primitive cabin made of cactus stalks that were chinked with mud to an elegant two-story ranch home purchased from a mail-order catalog. Each building has been restored, furnished and outfitted to reflect the time period of its construction.

The museum, which often hosts special events to illustrate what pioneer life was like, also holds artifacts ranging from spurs to firearms.

The annual National Cowboy Symposium & Celebration (generally regarded as the largest cowboy gathering in the world) brings in cowboys, ranchers and Old West enthusiasts from across the country.