Who Killed the Train? 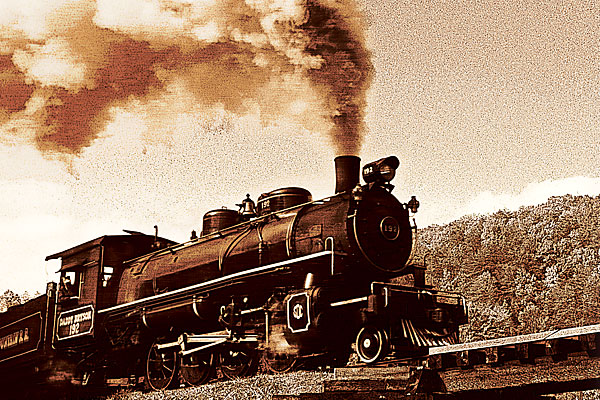 RAILROAD, n. The chief purpose of many mechanical devices enabling us to get away from where we are to where we are better off. For this purpose the railroad is held in highest favor by the optimist, for it permits him to make the transit with great expedition.

That’s how Ambrose Bierce defined the railroad in his Devil’s Dictionary. Before he vanished in the wilds of Mexico, Bierce did make his mark on railroad history. The San Francisco Examiner dispatched Bierce to Washington D.C. in January 1896 to foil an attempt by Collis P. Huntington to get Congress to excuse the Union Pacific and Central Pacific from repaying the $130 million loan the government had given them to build the first transcontinental railroad.

Huntington, wanting to get the bill through without public attention, tried to bribe the journalist on the steps of the nation’s capitol, telling him to name his price. Ever the wit, Bierce replied:”My price is $130 million. If, when you are ready to pay, I happen to be out of town, you may hand it over to my friend, the treasurer of the United States.” The papers ate it up; the bill, of course, got defeated.

If Bierce were still alive, what would he say about the bleak state the rail industry finds itself in today? Perhaps he’d riff on the topic on everyone’s minds these days:?fuel efficiency. Why boast about the elbow space, the scenic travel, the conversation, all the luxuries train travel affords? He’d just aim for the jugular. You want better fuel efficiency? Ditch the car and plane when you’re taking a long-distance trip that’s less than 500 miles. That’s 17 percent less energy you’ll be wasting per passenger mile than if you flew and 21 percent less than if you drove. (Not as eloquent as he would put it, but you get the point.)

In the American arena of public transport, passenger trains barely get a sliver of the pie. In 2002, airlines received $14 billion and highways received $32 billion in federal subsidies, while Amtrak received … $521 million, according to the U.S. Department of Transportation. Okay, maybe that was just one bad year for passenger trains. Let’s look at funding from 1971-2001. Surely, our country’s support of rail transport will be evident then. Air and highway funding: $1.89 trillion. Yep, sounds about right. Amtrak got what our highways received in one year?

It’s a Sad Sad Sad Sad World that we find ourselves in. Next year doesn’t promise to get much better. The proposed fiscal 2008 budget slices up the pie by allocating $14.1 billion to airlines, $40.3 billion to highways and $1.1 billion to railroads. How did we get to this point, and what can we do about it? Jason Strykowski shares the story.

The jive and the jazz both play pretty well in the Bayou, probably Salt Lake City’s best Creole-inspired bar, maybe the only one for that matter. Fortunately, my company and the beer are good too, but it’s now 2 a.m., the bar is closing and San Francisco has not gotten any closer. The California Zephyr, the “Western breeze,” one of the few remaining long-distance passenger routes in the United States, is running four hours late.

A tardy departure out of Chicago, a medical stop along the way and I’m stuck in downtown Salt Lake City, Utah, with nothing to do and no train to depart on. Normally, I’d love to bide my time in a train station. In fact, within several blocks of my current location are two beautifully preserved historic depots. Salt Lake City’s Union Pacific and Rio Grande Stations are shining examples of 20th-century rail architecture. Sadly, the construction of a new mall just shy of a decade ago forced Amtrak to move its line a block west. This temporary station, made of a handful of portable units, smells faintly of urine and boasts amenities of precisely three vending machines. The Raisinettes look mildly good.

Two hours later, when the clock rolls around to 4 a.m., the sad irony of the experience hits. In the time I have waited for the late-running Zephyr, I could nearly have flown to the Bay Area and back. It also occurs to me I could have driven almost halfway. When the train finally pulls out of the makeshift station at 5 a.m., the journey still has 20 hours left. In 1869, it took eight days to ride the train across the country. I’m starting to think things haven’t improved by much.

The much-maligned remnants of America’s passenger rail system remains standing as the only major survivor of the slow destruction of American rail travel. The nation’s railways reached their apex around WWI, but the coming of the Great War started passenger rails on a downhill track. The demands of the war forced the federal government to take control of the rails from private corporations and officials never really relinquished that control, even after the war ended. Coupled with its desire to promote the emerging automobile industry, the federal government rode the rail into the ground.

Among other things, the government returned control of the rails to private industry with inflated labor demands and unrealistic costs. Although a sort of golden era in train history opened up in the 1940s for the next few decades, the automobile was driving the train off the rails and the government contentedly watched, and even assisted in its demise.

It took another 50 years, but the U.S. dealt a far more crippling blow to the railways at the exact moment our country tried to save it. Following the bankruptcy and failure of Penn Central in 1970, the government stepped in and created Amtrak to ensure that a passenger rail system continued to exist in the United States. The following decades witnessed a trend in mergers and conglomerations, and the few remaining passenger train corporations became even fewer. In the 1980s, big business in the U.S. suffered from a stagnant economy, with the Reagan administration responding by deregulating requirements in the industry and more and more investors shied from passenger track development. Now freight, a far more economic but still not impressively profitable usage of the lines, ruled the rails. If not for Amtrak, a national passenger rail system would be a thing of the past in the United States.

Not that Amtrak is a prize. The trains frequently run late, and many of the cars are decades old. The biggest problem, however, is that Amtrak owns only 30 percent of the 21,000 miles over which it travels. (Amtrak has full ownership of 745 miles of railroad.) In the U.S., on the whole, only about 7,000 miles of track are dedicated to passenger trains. For the most part, Amtrak’s passenger trains ride on freight rail through a mutual arrangement between the two rail entities. This system allows Amtrak to canvas much of the U.S., but the freight rails limit the trains. In most cases, law and infrastructure prohibit Amtrak from traveling at speeds above 79 mph. In contrast, trains in Europe and Japan frequently cruise at speeds above 100 mph, and the technology exists to bring trains to nearly 200 mph.

Aboard the California Zephyr, oddly, people don’t act bothered by our slow progress across the plains of Nevada. My fellow passengers are a bit of an odd lot who seem to be on an extended picnic more than a long trip. One person dives into an entire medicine chest of supplements. Another buries herself in blankets. I hear them having nostalgic conversations about trains. One man discusses the difference between real snowstorms and wimpy California flurries.

These lines of conversation come as we’re winding our way through the Sierra Nevadas-by far the most scenic stretch of this journey. Passengers fill the observation car, and their moods visibly improve. Most, however, don’t turn off their camera flashes, and suddenly I feel a bit like Paris Hilton. Nonetheless, it’s right here, minutes away from the historic town of Truckee, darting in and out of tunnels past Bob Ross-like pines, that taking trains makes sense. No one aboard is in a rush; everyone is playing games or admiring the view. Families spend time together. The trip is more mobile entertainment than utilitarian transportation.

Many of the standing Western rails might easily fit that description as well. Of the 256,000 miles of railroad that once served travelers, only a few miles in the West still move people around the area. Not far from the beginning of my odyssey, citizens of Heber City, Utah, restored part of the Denver & Rio Grande line to create a very pleasant recreational ride in the Wasatch Mountains.

The Heber Valley Railroad, fortunately, has some company. On the way to California, I pass by a few other great train attractions. The Virginia & Truckee Railroad once moved tons of precious ore out of the Comstock, and now it transports visitors for a 35-minute steam ride.

Hours later, my train goes through Sacramento. Mostly it stops to drop off weekend gamblers, but the smart money is spent on the California State Railroad Museum. I stop to check out an old sleeper car from a classic 1950s California Zephyr, clearly a more comfortable ride.

A seat designed to slide out into a bed would have saved my back some considerable pain around hour 15. Even though the Amtrak coach chairs nicely slide out with a footrest, it’s just not the same. I suppose I could have spent an extra hundred for a sleeper, but that would have left me less money for the onboard meal. Of course, the dining car has just run out of food, and it’s only 7 p.m.

Help Save Our Railroads!

1. Ride Amtrak’s passenger trains for long-distance trips that are less than 500 miles.

2. Some of our most favorite travel spots are reachable by tourist trains. Ride these trains, instead of driving from point A to point B. (Warning: You May Become Addicted to Train Travel.)

3. Write in to your local congressperson, asking for increased funding so Amtrak can update its rails to allow for high-speed trains and to expand our usage of existing lines. To reach the Congressional switchboard, call 202-224-3121. Visit congress.org to find your members of Congress.

3. Support local light rail transit systems as they serve a dual purpose by helping reduce the congestion on freeways and reduce our energy waste.

4. Join the National Association of Railroad Passengers, the largest citizen-based group advocating for rail transit passengers. As a member, you’ll be advancing a worthy cause as well as receiving a 10-percent discount on most Amtrak travel, a newsletter, access to Congressional voting charts, updates on legislation regarding Amtrak and the ever-so-cool “I’d Rather Be On the Train!” bumper sticker. Visit: narprail.org or call 202-408-8362.