Why Does Everyone Love Louis… 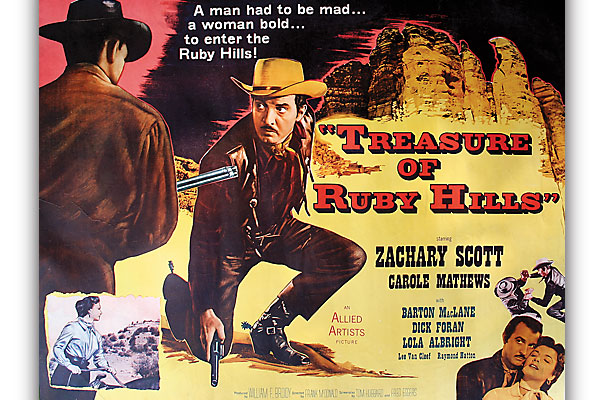 So here I sit, hawking my novels at a book signing, and this old gentleman’s stopping by to tell me this story.

I know immediately he’s not contributing to the Johnny D. Boggs retirement fund, because I’ve heard similar stories before.

He has a complete collection of Louis L’Amour novels, and he’ll start reading them, from beginning to end, until he has finished every book L’Amour ever wrote. After that, he’ll go back to the first one and start reading them all again.

So I did what any self-respecting Western novelist today would do. I pulled out a .45 Colt and shot him.

Okay, I didn’t. But it crossed my mind.

Louis L’Amour would have celebrated his 100th birthday on March 22. Almost 20 years after his death, he refuses to give us struggling wanna-be Western novelists a break.

Depending on your source, 28 or 45 of his novels and stories have been filmed. I’ve seen The Sacketts 28 or 45 times.

L’Amour received the Medal of Freedom from Ronald Reagan in 1984. I backed Walter Mondale.

Back to the book signing. L’Amour fans have three stories they tell me. It’s like a cult.

Story 1. Story 2. Story 3. The same thing, over and over again. Kinda like L’Amour’s plots.

No. 2 is about L’Amour’s Last of the Breed. “It’s a book you read, where you keep looking at how many pages you have left, and you slow down because you don’t want to finish it, just enjoy it.”

Well, a guy once said of my novels: “I pick up your books all the time at the Muskogee library … never finished a one of ’em.”

And then there’s that omnipresent L’Amour story everyone tells everybody. “If he writes that there’s a rock somewhere, you can go there and sit on that rock because L’Amour’s been there!”

I always liked another story better, which I overheard in Los Angeles by a woman who had known L’Amour. “Been there?! He never left the Beverly Hills Hotel bar.”

Bitterness. Jealousy. Traits you don’t find in L’Amour’s heroes and heroines. Excepting landscape descriptions, you don’t find much accuracy either, historical or otherwise.

In his foreword to The Sixth Shotgun, editor Jon Tuska recalls this conversation with L’Amour.

JT: “Well, take Last Stand at Papago Wells. After an Indian attack, according to the story, only five characters have been killed, but one of the surviving characters counts six corpses.”

LL: “I’ll have to go back and count them again.”

I like that story. It shows me a Louis L’Amour who could laugh off criticism. Five bodies. Six bodies. Who cares? Last Stand at Papago Wells has gone through more than 25 printings since it was first published in 1957.

I’ve been studying L’Amour since I read Hondo back in junior high, and, darn it, I’m pretty much in agreement with all those folks who come up to me at book signings and praise him. They like the way they feel after reading one of his Westerns. They know what they’re going to get when they crack open Bendigo Shafter or West
from Singapore.

I can’t say I’ve liked every Louis L’Amour book I’ve ever read, but I’ve never not finished one. High praise, I think.

Johnny D. Boggs finished this article quickly, so he could start reading Matagorda.