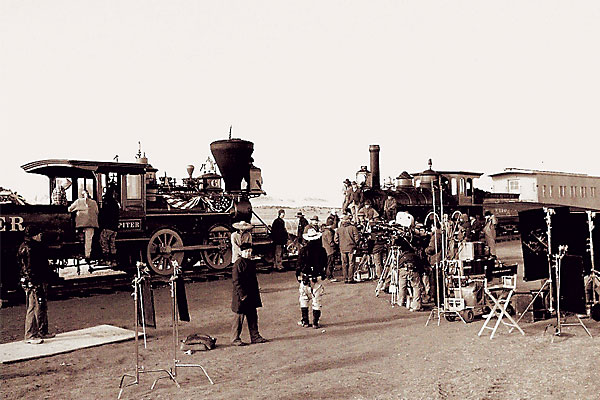 Model railroads didn’t do a thing for Jim Clark when he was a kid growing up in Milwaukee and California in the 1940s and 1950s, but the real thing blew his whistle.

That fascination hasn’t diminished one bit as he has not only become a Hollywood expert on trains, but he’s also owned a train himself and now is helping bring back the “Queen of the Short lines” in Nevada.

Jim serves on the board of the Northern Nevada Railway Foundation that is charged by the state with restoring all 17 miles of the original Virginia and Truckee Railroad that runs from Virginia City to Carson City, through 17 complete circles that make it the “crookedest railroad in the country.”

“This was the train that carried its weight in gold and silver,” Jim notes. Built in 1869 to guarantee the delivery of precious metals from the mines to the mills, the railroad did its job well until operators abandoned the line in 1938. The private funds raised to build the railroad resulted in the most beautiful locomotives and rolling stock seen on any line, so when it was no longer wanted as a transport of commerce, its luscious pieces went off to Hollywood, where they starred in more than 80 films.

In 1976, Robert Gray of Sacramento, California, decided to bring back the train as a tourist ride. He restored some of the tracks to provide a 35-minute ride that has been a popular tourist attraction that’s since carried one million passengers (including the 40,000 who rode the train last year). The ride whetted the appetite of those who heard the story of the original line, and the State of Nevada was convinced that bringing back the V&T would be an economic boon to the area. It also would restore an important piece of Nevada history.

Jim Clark was on tap for this project early on. He was a founding member of the Friends of the Virginia and Truckee Railroad and helped build the Nevada State Railroad Museum. By then, he’d already owned three railroads in California and was advising Hollywood on how to film authentic trains in the movies and where to find them. He even took one of V&T’s “celebrity” engines, No. 22, to the 1986 World Fair in Vancouver. Called the Inyo and built by Baldwin Locomotive Works in 1875, No. 22 was featured in Paramount films Duel in the Sun and Union Pacific.

In 2001, Jim moved to Tombstone, Arizona, where he hoped to build a railroad spur leading to tracks in nearby Benson. But the project failed so badly that the owner of the Benson line-the very tracks on which the Earp brothers once rode-gave up in disgust.

“We recently bought tracks for the V&T and guess where they came from? They’re from Arizona, part of the 60 miles of tracks torn up at Benson,” Jim says. Despite his disgust with the destruction, Jim added, positively:?”But now those tracks are being reused in Nevada to rebuild its history.”

Jim is moving back to Nevada to be near the project close to his heart. He notes that over the years, often with his help and sometimes from his own private collection, Nevada has been buying back the original V&T rolling stock. Its state railroad museum now houses the largest collection of V&T locomotives and cars (while museums in California and Pennsylvania also own some stock).

When completed in 2009, the new V&T line will closely follow the original right-of-way for an exciting 17-mile ride. Jim is very certain it’s going to be a success.

Since Virginia City gets more than one million visitors a year, Jim believes quite a few of them will want to ride in these beautiful rail cars. Now Jim doesn’t expect it to provide the kind of return its original owners earned in the late 19th century—investors made $100,000 a month! He laughs at that figure, just as he laughs when he remembers it took 1,500 workmen, mainly Chinese, a little over a year to build the original line, while it is taking hundreds of volunteers decades to bring it back.

“This will be profitable and a great asset to the area’s economy and history,” he says flatly.

He’s particularly pleased that the State of Nevada, which created the foundation on which he serves, is so hot about this project. “The government is completely behind it,” he says. So are many private donors and enthusiasts who know this piece of history is not only worth saving, but also worth repeating.

Promoter Steven Saylor thinks the foundation’s next fundraiser “will draw visitors like bears to honey. It’ll get ’em fired up about railroading in general and our train and communities in particular. Before you know it, money will be pouring in like the Carson River flows in the spring.” The fundraiser, an international art expo called Railway Reflections, will be held July 17 through August 17.

If you attend, look for those proud parents from the foundation as they show off the beautiful locomotives and cars of a railroad they’re bringing back to the glory of its youth 139 years ago.

Jim Clark will be there, looking probably proudest of all. After all, he’s earned it.