A Sweet Search for History 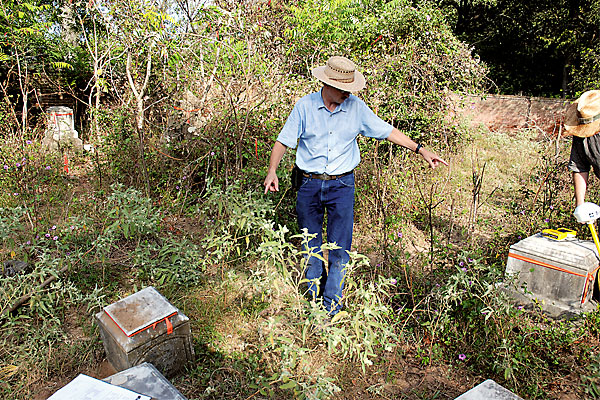 On May 27, 1837, the Texas Ranger and four or five fellow Rangers headed out from Fort Milam, a frontier post southeast of present-day Waco, Texas. About a mile out, they found a bee tree. The men cut it down and started feasting on the honey.

That’s when a group of Caddo Indians attacked. Stories say Coryell was hit by the first shot (it’s unclear if it was an arrow or a bullet); the other four Rangers got away. They returned the next day and buried Coryell’s body nearby.

Over the years, the location of that grave was lost—even as Coryell’s legend grew. He not only was one of the first Rangers, but he was also a hero of the Texas Revolution. Jim Bowie was a good friend. A Texas county is named for him. Yet nobody knew exactly where Coryell’s body was buried.

Fort Milam and a nearby settlement were abandoned and fell into ruin. A cotton plantation took over the region. The slaves who worked there developed their own cemetery a few miles from the main house.

Jump ahead to 2007. The Summerlee Foundation of Dallas bought the land as a preservation project and began researching the slave cemetery. The Texas Historical Commission, led by Chief Archaeologist James Bruseth, joined the effort.

Coryell was not part of the thinking for the project. But then investigators came across a slave account that mentioned Coryell’s grave—of how it had collapsed in the mid-19th century, and how the slaves had carried stones from the plantation to cover it. According to the story, Coryell was buried a bit south of the slave graveyard. So, in addition to analyzing the slave cemetery, the investigators began looking for Coryell’s grave.

In the spring of 2010, foundation workers were clearing brush around the cemetery, partly to clean things up and partly to make space for a fence to protect the site. They came upon a pile of rocks, covering an area that was about the right size for a grave.

The investigative team was excited, as you can imagine. But they needed more information. Bruseth and company probed between the rocks, going down about a foot to see if they saw a grave shaft. They found one.

“We’ve got a grave of some individual, and it just fits this old slave narrative perfectly,” Bruseth says. The team’s initial conclusion, based on circumstantial evidence: they had found Coryell’s grave.

But the scientists want more. They have tracked down a descendant of the Coryell family (the Ranger himself had no children); he has given them permission to excavate and exhume the site. That work will start in January.

What do they expect to find? Bruseth says the soil composition probably preserved at least some skeletal remains. He hopes that includes the skull.

“When Coryell was shot by the Indians, he was scalped,” the archaeologist explains. “So there should be traces of knife cuts on the skull.”

It’s also possible that the grave includes the arrowhead or bullet that killed Coryell. But it’s unlikely the team will uncover much additional evidence. Clothing will have deteriorated, except for metal buckles. Rangers of that period did not have identifying symbols like badges, so that won’t help.

Ultimately, DNA is needed to close the case. The investigative team includes a skilled genealogist who is searching for a female descendant of the Coryells (the biological comparison must be made to a woman). If the team can find one and also extract DNA from Coryell’s remains, then the team can prove once and for all if the Texas legend is buried in that grave.

Bruseth says that will be more than exciting—it will be one of the most important Texas historical finds in many years: “If we conclusively prove that this is the grave of James Coryell, that will be a great mystery, finally solved.”

An ironic note. About 100 feet away from the site is a relatively new bee tree. Someplace, James Coryell must be licking his lips.