A Giant of a Gun 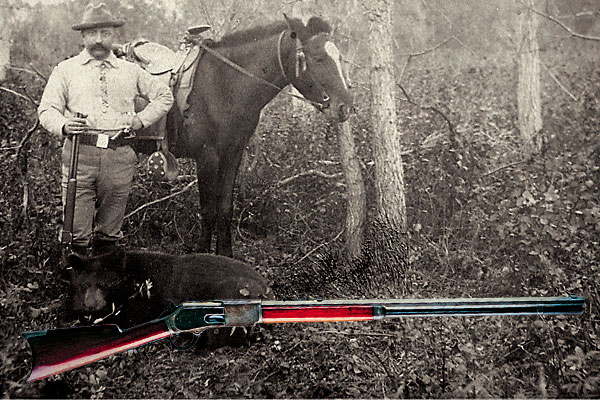 Teddy Roosevelt packed one of his 1876 Winchesters through a true Wild West adventure.

During his stint as a rancher in the Dakota Badlands in the early 1880s, Teddy Roosevelt packed one of his 1876 Winchesters through a true Wild West adventure.

The future U.S. president used it to capture a quartet of boat thieves and brought them to justice—single handedly!

Another notable frontiersman, John “Liver Eating” Johnson, also packed one in his later years, probably when he became the first constable of Red Lodge, Montana, in 1895.

The 1876 Winchester was also one of the few repeaters used in the slaughter of the northern buffalo herd in the final years of commercial hide hunting.

Regardless of who used the massive repeater, the Winchester 1873 received its fair share of popularity throughout 1877-1897, with a production run of more than 63,000 guns.

Dubbed the “Centennial Model” and introduced at Philadelphia’s Centennial Exposition of 1876, Winchester’s lever-action rifle was the largest and among the most powerful repeaters on the frontier.

Although the model was conceived 12 years earlier, problems in developing reliable and reloadable large-bore ammunition held up production. Looking like an oversized 1873 model, the ’76 weighed in at around nine to 9½ pounds (unloaded) and measured 48½ inches long with a 28-inch barrel (26- and 28-inch barrels were standard).

Eventually called the Model 1876, the rifle was Winchester’s answer to the demand for a repeater that packed more power than the medium-bored ’73 model. Although it still relied on the simple toggle-link action of earlier Winchesters, the ’76 had a receiver that measured 1 1/2 inches longer than the 1873 model, thus allowing it to be chambered for bigger, more powerful blackpowder cartridges, such as the .45-75, .45-60, .50-95 and .40-60, with a handful produced in .45-90.

In its unique, full-stocked carbine configuration, the ’76 was not only carried by a number of ranchers and cowboys, but also by the North West Mounted Police in Canada. The semi-military force carried 1,261 Model ’76s  from 1878 until the mounties retired the weapon in 1914.

Phil Spangenberger writes for Guns & Ammo magazine, appears on the History Channel and other documentary networks, produces Wild West shows, is a Hollywood gun coach and character actor, and is the Firearms Editor and a regular columnist for True West.