That Other Rooster Cogburn 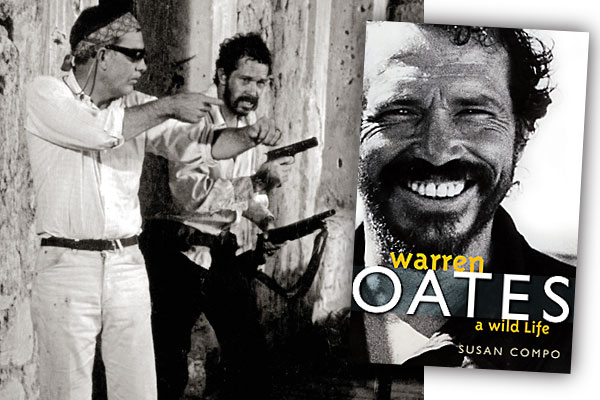 Yet nobody seems to remember the other Rooster Cogburn, and I don’t mean the character in Charles Portis’s exceptional 1968 novel.

Let’s not overlook that gruff but charming character actor Warren Oates. He’s probably best remembered for his supporting roles in 1962’s Ride the High Country and 1969’s The Wild Bunch (or maybe, for you young whippersnappers, as Sgt. Hulka in 1981’s Stripes). Yet he played Deputy U.S. Marshal Reuben J. “Rooster” Cogburn too.

“Only I could play John Wayne,” Oates said, facetiously, of course.

On May 19, 1978, the made-for-TV movie True Grit: A Further Adventure premiered on ABC. Actually, it was conceived as a pilot for a TV series, teaming Cogburn again with young Mattie Ross (played by Lisa Pelikan).

“The late ’70s were comparatively lean years for Oates, and if the pilot/made-for-TV movie had been picked up as a series, he’d have been happy about that too,” says Susan Compo, author of the critically acclaimed biography Warren Oates: A Wild Life, published by the University Press of Kentucky.

The pilot was not picked up as a series. I’ve never met anyone who even saw the movie.

Are Oates’s movie and the 1969 hit similar in any way? Uh … let’s see … well, both movies were at least partially filmed at Buckskin Joe’s outside of Cañon City, Colorado. And, oh, yeah, Compo says that the only time Oates attended the Academy Awards was in 1969, when Wayne won his Oscar for True Grit (The Wild Bunch was up for two awards that year).

“Oates’s performance was a lot more understated than Wayne’s iconic, kind of campy one,” Compo says. “About the only thing they had in common was the eye patch.”

“And Oates was certainly not the outsized—okay, fat—fella Cogburn seemed to call for,” Compo says.

In All Movie Guide, Hal Erickson called Oates’s Cogburn a “one-eyed thin man with a beard.”

The TV version, written by Sandor Stern (best known for 1979’s The Amityville Horror) and directed by Richard T. Heffron (1975’s I Will Fight No More Forever), had Cogburn agreeing to help Mattie travel west to join her relatives in California, only to lose their train fare playing poker. Antics ensue.

“Oates was in poor health when he made True Grit, and one touching aside was that the horse he rode was one he’d worked with on several Gunsmokes [Oates had appeared in 10 episodes between 1958 and 1967] many years back,” Compo says. “‘He’s 26 years old, and I really think he recognized me,’ Oates enthused about old Ash. In many ways they were both veteran warhorses at this point in their careers.”

So is Jeff Bridges, who stars in the remake due out just before Christmas. And so was Duke Wayne.

So when you get to comparing True Grit Cogburns, don’t forget Warren Oates’s version.

Oddly enough, True Grit: A Further Adventure wasn’t the first time Oates had followed in the footsteps of another Hollywood icon’s Oscar-winning performance.

In 1977, Oates had played Capt. Charlie Allnut in a made-for-TV pilot called The African Queen. Humphrey Bogart won his only Academy Award for his performance in that 1951 classic.

That Oates pilot was not picked up either.