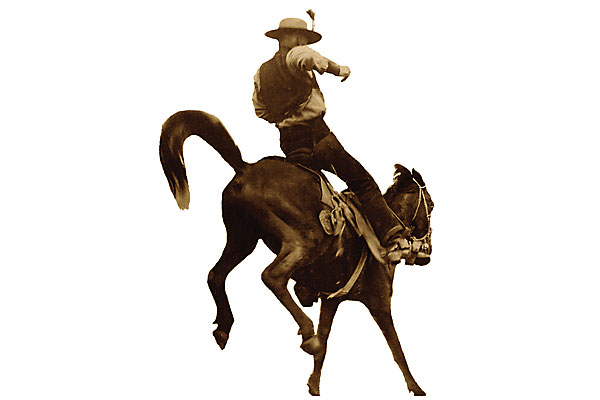 One of the most unpredictable, harrowing, sometimes embarrassing and always painful misfortunes that a cowboy could expect in the Old West was being bucked off, knocked off or even shot off his trusty horse.

At least a few times during his career in the saddle, every frontier cowboy could expect to be introduced to terra firma with whatever gravity and unpredictable equine behavior could offer.

What separated the lucky from the unlucky unsaddled cowboy was the extent of the injuries that fate and flying hooves occasionally imparted on his beaten body, especially his poor head.

As the Frontier Doc, let me take you back in time to grasp my mindset as a physician in the 1880s who is presented with a head injured cowboy. I will re-live the treatment options available to me then and up to the current day.

In the 1880s, my training in the diagnosis and treatment of head injuries comes from several different textbooks, especially those that describe the abundant experience of physicians who encountered head wounds during war time. There are no shortage of case reports about blunt trauma and penetrating injuries to the skull by everything from sabers and tomahawks to rifle butts and shrapnel.

Fortified with the wisdom and caution of my medical teachers, and my clinical experience working as a medical/surgical apprentice, I approach my fallen cowboy patient with some confidence and an abundance of apprehension, realizing that I am really rather limited in what I can offer him beyond basic surgical care and medication for pain relief (laudanum).

I know nothing about x-rays, much less about CAT scans and MRIs. Since Pasteur described his “Germ Theory” several years before I trained, I have an inkling about the nefarious capacity of some germs (bacteria) to act as the agents of infection. In this regard, I practice antisepsis (cleaning wounds, washing hands and using clean bandages); but I know nothing about nor have access to antibiotics, nor am I effectively familiar with some American Indian medicines and plants (e.g. mosses) that are used empirically to treat and prevent infections.

As a trained and experienced frontier doc, I have the capacity to offer my injured cowboy basic care, such as sewing up scalp wounds, stopping superficial bleeding with pressure and applying ice, if I can find some.

In severe cases, if I suspect intracranial bleeding or brain swelling, I may use a trephine to drill a hole in his skull to relieve pressure. I will perform this procedure only as an act of life saving desperation, realizing that the vast majority of my patients will probably die from unstoppable bleeding or infection.

My greatest challenge on the frontier is to manage my patient if he survives a serious head injury, such as a skull fracture or a severe concussion (closed head injury).

The “late evolution” symptoms following brain injury that I expect to see in my cowboy in the 1880s are no different from those symptoms doctors will confront in the early 1900s.

One effect, discussed by Dr. Pearce Bailey in his 1906 text Diseases of the Nervous System Resulting from Accident and Injury, is called “cerebrasthenia.” This syndrome includes persistent problems like headache, dizziness, intolerance to alcohol and even personality changes.

Another late effect is termed “traumatic insanity.” Dr. Bailey writes that the diagnosis of this post-traumatic condition is confounded by factors such as a hereditary mental illness, alcoholism or organic disease (e.g. syphilis).

Whatever the dominating cause of either “cerebrasthenia” or “traumatic insanity,” as those symptoms will be called years from now, as a frontier doctor in the 1880s, I am helpless in effectively treating either one. Unfortunately my severely injured cowboy patient may end up in an “insane asylum” or confined to his home for years under family care.

Notwithstanding such bad outcomes, I remind myself that given enough convalescent time, most of my unsaddled, head hammered frontier cowboys will recover completely.

It seems, however, that the best cure for my less injured cowboy patient will not have changed over the past 130 years. Stuck somewhere in my memory, I remind myself to write him a prescription for that most pragmatic elixir, “tincture of time,” after I nag him about not wearing a riding helmet!