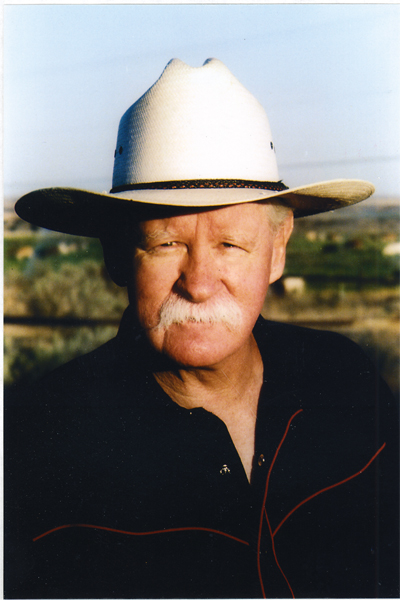 When he was 13 years old, poet Red Shuttleworth came to a realization about the Old West. While on a school field trip in 1958 to the Jewish Cemetery in Colma, California, it hit Red that the legendary West didn’t happen a long time before. The West reached into the present, and he could know it for himself.

In those days, Red watched the popular Life and Legend of Wyatt Earp TV show starring Hugh O’Brien. He made the connection that, relatively speaking, “We were of the same time and place.”

Ever since, Red has done everything he can to be a part of the West. He’s written 15 poetry chapbooks and the Spur Award-winning collection of poems, Western Settings, published by the University of Nevada Press, and he’s edited Lucky 13, plays about Arizona, Nevada and Utah.

TW: How did you accomplish that?

RS: I’d gone to college in San Francisco, where I grew up. As soon as I finished my master’s degree, Kate and I went off to live in the rural West. We tried not to put down roots so we could experience more of it. We lived in the central interior of British Columbia. We lived on Galveston Island in Texas. From there, we visited as many Western sites as we could. I loved the music coming out of Texas at the time, and the good writing. Larry McMurtry (see p. 24) had just published Leaving Cheyenne. Later, I got a job in Nebraska that allowed me to visit a number of historic places. We chose to live where the houses weren’t good, but we had a corral and a barn in the back. We had cows for our four kids to work, and they rode horses that belonged to neighboring ranchers. My teaching salary kept the cattle afloat.

TW: When did you start writing?

RS: In 1967. I starting out doing bad imitations of Yeats’ poetry. But I was learning to love language and words. I didn’t wake up one day and say, “I think I’ll commit to writing.” I said, “I think I’ll go buy a journal.” I don’t know whether I’m OCD or well-disciplined, but I write every day. I don’t skip.

TW: How did winning the 2001 Spur Award for Poetry from Western Writers of America change things for you?

RS: It lifted me out of obscurity. My publisher, the University of Nevada, nominated me for the award. It was the first time WWA would give a Spur for poetry. My editor called after getting the news and said, “We’re putting something in the mail for you.” I said, “I already got it and cashed it. I bought a six-pack of Coke and some ice cream.” (I was referring to my royalty check.) When I went to Idaho Falls to accept the award, Elmer Kelton, someone whose books I’d admired, came up and congratulated me. I walked around reading name tags and feeling starstruck.

TW: You’d been writing plays, too.

TW: About the West?

RS: The contemporary West. I’ve had developments at Sundance and at the Utah Shakespearean Festival. I think I hold the record for the most plays developed at the Utah festival.

TW: These days, you’re on the road, doing lots of readings?

RS: I’m on the roster for Tumble Words for the Nevada Arts Council. I did a tour of Nebraska colleges last year. I toured with rodeo poet Paul Zarzyski of Montana. He and I write about the same things—sharing life with the creatures; the history and geographic destiny of the West; and how people of the West might learn to love each other better.

TW: True West named you in 2004 as the best living cowboy poet.

RS: I phoned other poets, the ones I consider great, to make sure they were still alive. True West generally didn’t publish poets, but the magazine put one of my poems on a back page.

TW: What part does talent play?

RS: People with great ability may not have to work as hard. For me, it’s about persistence and luck and work ethic. I take my lumps; I never count my losses or rejections. I’m at a place now to reap the rewards of a long life of writing. I like to sit in a bar, not always drinking. You think it’s not productive, just watching what is going on, but what you touched or saw gets stored. Thirty years later, more and more of it is showing up in my poetry.

TW: For you, there will always be writing?

RS: Sometimes the work of older writers shows they don’t have appetite anymore. Fortunately, I have a lot of appetite still.

Visit “Website Extras” at twmag.com for a poem by Red Shuttleworth.