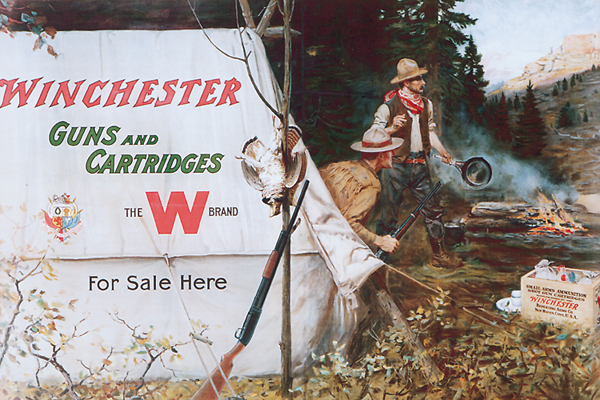 MISS: “A famous ad that most boy baby boomers will recall from Boys’ Life, the old scouting magazine of the ’50s, showed a happy lad, carrot-topped and freckly like any number of Peck’s Bad Boys, his teeth haphazardly arrayed within his wide, gleeful mouth under eyes wide as pie platters as he exclaimed on Christmas morn, ‘Gee, Dad . . . A Winchester!’ All gone, all gone, all gone.” Thus began Washington Post writer Stephen Hunter’s poignant piece about U.S. Repeating Arms (which produced the Winchester rifles and shotguns) closing its plant in New Haven, Connecticut, this past January. No more will the classic lever-action rifle (the so-called “Gun that Won the West”) be produced, unless some charitable preservationists, like those found in our following blurb, step up to the plate. Will future generations only know the Winchester by watching Jimmy Stewart in Winchester ’73, Chuck Connors in The Rifleman and Steve McQueen in Wanted: Dead or Alive? Only time will tell.

HIT: Former President Teddy Roosevelt, naturalist John Audubon and Wild West show shootist Annie Oakley carried double-barreled and single-barreled shotguns from Ithaca Gun Company, which was founded in 1878 by Leroy Smith of Center Lisle, New York. A childhood illness left him walking with crutches for the rest of his life, but nothing could restrict the dreams of this smart businessman. He joined forces with W.H. Baker in 1878 to help improve the shotgun business, and he bought out Baker’s ownership in 1886. The business remained in the Smith family for nearly 100 years until hard times forced a sale to the company that would own Brunswick/AMF in the 1980s. Craig Marshall was purchasing an Ithaca gun when he found out the gun manufacturer (which had gone through several owners by that point) had closed its doors in 2005. By that December, Craig and his father Floyd had saved the company. The Marshalls moved Ithaca’s inventory to their molding and tool manufacturing company in Upper Sandusky, Ohio. Ithaca reopened that same December and, of course, it will be issuing Ithaca’s famous Model 37 repeater. Here’s hoping for more people like Craig and his father.

ONGOING: “Bad God’s Tower” was what Lt. Col. Richard I. Dodge of the U.S. Geological Survey’s reconnaissance of the Black Hills in 1875 said the Indians called Wyoming’s rock formation, which rose some 1,200 feet above the Belle Fourche River. Dodge modified the name to Devils Tower. As America’s first monument, Devils Tower will celebrate its 100th anniversary  on September 22-24 (307-467-5283 / www.devilstowercentennial.com). Thanks to the Antiquities Act of 1906, put into effect during Teddy Roosevelt’s presidency, 123 national monuments have been established with the purpose of safeguarding America’s historic sites. Visit blm.gov/volunteer if you’d like to become one of the Bureau of Land Management’s Heritage Volunteers. You could join the ranks of people such as Darlene Stark, who has pounded miles of fence posts in remote terrain and hauled rolls of barbed wire to wildlife habitats in need of enclosures in Boise, Idaho; and Scott Wheeler, who worked with the Price, Utah, field office to map 1.8 million acres in the San Rafael Swell in central Utah for off-highway vehicles. Back in 1897, the off-highway vehicles that helped Butch Cassidy and Elza Lay make their escape across the Swell after the Castle Gate robbery were not ATVs but their trusty steeds.

ONGOING: Gary Chaffin of Mission, Kansas, has been busy this past summer, competing with other members of his local chapter of the American Frontier Reenactment Guild at the Dalton Days Festival in Meade, Kansas, and Old Cowtown Museum in Wichita (see p. 82). As of press date, the state with the most members is California, with 126 professional re-enactors and living history historians. The Kansas group that Chaffin serves as safety director for is not doing so badly, with 44 enthusiasts signed up. As one of the last lifelines to the Old West, these hundreds of re-enactors help keep the West alive with their skits of life in the 1800s. To join the guild or to hire these respected members, visit www.afrg.us or call 913-557-4459.

ONGOING: When Deadwood, South Dakota, historian and businessman Don Clowser passed away in 2004, he had already donated his collection of historical artifacts to the Days of ’76 Museum. With people like George Horse Capture (instrumental in developing the Indian galleries at the Buffalo Bill Historical Center in Cody, Wyoming) confirming that the collection had rare pieces connected to more than 20 different tribes, the pole barn facility that currently houses the museum didn’t seem sufficient to protect the collection. The museum is popularly known for its memorabilia, photographs and costumes from the Days of ’76 Parade and Rodeo, Deadwood’s oldest historic attraction. Now, though, curators want to turn it into a “Cowboys and Indians” museum—three million dollars has been allocated by the city of Deadwood toward the six-million-dollar project. Museum officials are currently seeking volunteers for the costume collection and other programs, and is also interested in speaking with anyone who has any Days of ’76 memorabilia or stories. Contact Deborah Gangloff or Ron Burns at 605-578-2872. The more you share with the public, the more we all can learn from our heritage and apply those lessons to what we encounter today in the West.