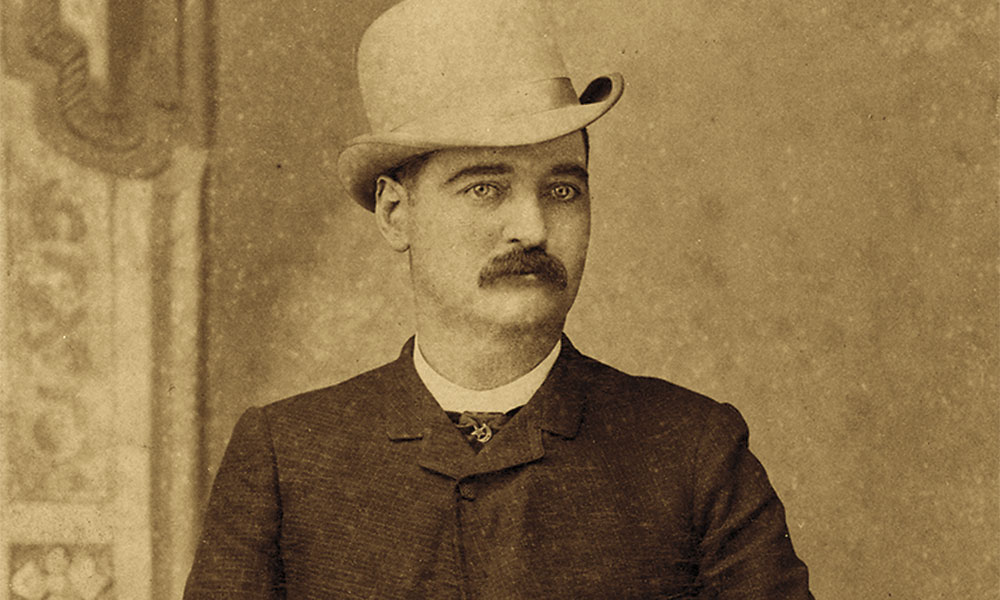 Bat Masterson has just covered 1,100 miles, mostly by rail, to come to the aid of his estranged brother Jim.

As the Dodge City-bound train pulls into the depot from the West, Bat swings down off the train on the north side. It is a pre-emptive move. His intuition tells him his brother’s enemies may attempt to round him up at the depot. His intuition is good. He scans the train platform and the noon-time streets looking for trouble. As the caboose passes him by, he notices two men on the opposite side of the tracks (the south side) walking toward the depot.

Bat recognizes both men immediately and shouts out, “Hold up there a minute, you two. I want to talk to you.”

Saloon owner A.J. Peacock and his brother-in-law bartender, Al Updegraph, take one look at the familiar stocky figure striding towards them and turn on their heels, ducking behind the corner of the jail.

Both sides pull weapons and begin to bang away at each other (it’s unclear which side fired first). Bat retreats to the railroad track’s three-foot berm and ducks down behind it.

Bullets snap over Bat’s head and crash into Dr. McCarty’s drugstore on the north side of Front Street. Masterson returns the fire, knocking huge splinters of wood from the corner of the hoosegow.

Soon, Bat is also receiving fire from several south-side saloons as deadline partisans join the fray. The compliment is returned from the north side of the tracks as friendly fire (probably Jim Masterson and his friends) rips into the south-side dwellings. Bullets careen into the Long Branch Saloon sending patrons scrambling out the back door. Chalk Beeson, the owner, seeks refuge behind the door of his safe. George Hoover’s saloon loses a window and a bullet tears a newspaper from the hands of an idler.

Amidst the wild firing, Al Updegraph suddenly pitches forward as a bullet rips through his chest. Not long after, both Bat and Peacock run out of bullets. Mayor A.B. Webster runs up and sticks a Fox shotgun in Masterson’s face. Learning from the mayor that his brother is alive, Bat surrenders and hands over his empty six-guns.

Bat had been in Tombstone, Arizona Territory, with Wyatt Earp and others from the Dodge City gang when he received word of his brother’s troubles. He immediately caught a stage for Benson and boarded a train, heading eastward. Through a series of rail connections, he made his way through New Mexico, up into Colorado and then out across Kansas.

A hearing was held and formal charges were brought against Masterson. The complaint stated that “W. B. Masterson did…unlawfully, feloniously, discharge a pistol upon the streets of said city.” Bat pleaded guilty and was fined $8 in costs. Both Bat and his brother left town on the evening train. The Ford County Globe claimed “They were allowed to leave town, with the understanding that they were not to return.”

Updegraph insisted it wasn’t Bat who shot him. Writing in his hometown paper, the Medicine Lodge Index and later reprinted in the Ford County Globe, Updegraph claimed, “We were then fired at by parties from the saloon doors on the north side of Front Street, from one of which I was shot through the right lung…”

We recommend: Bat Masterson: The Man and the Legend, by Robert K. DeArment, published by University of Oklahoma Press. Available through True West, (888) 687-1881