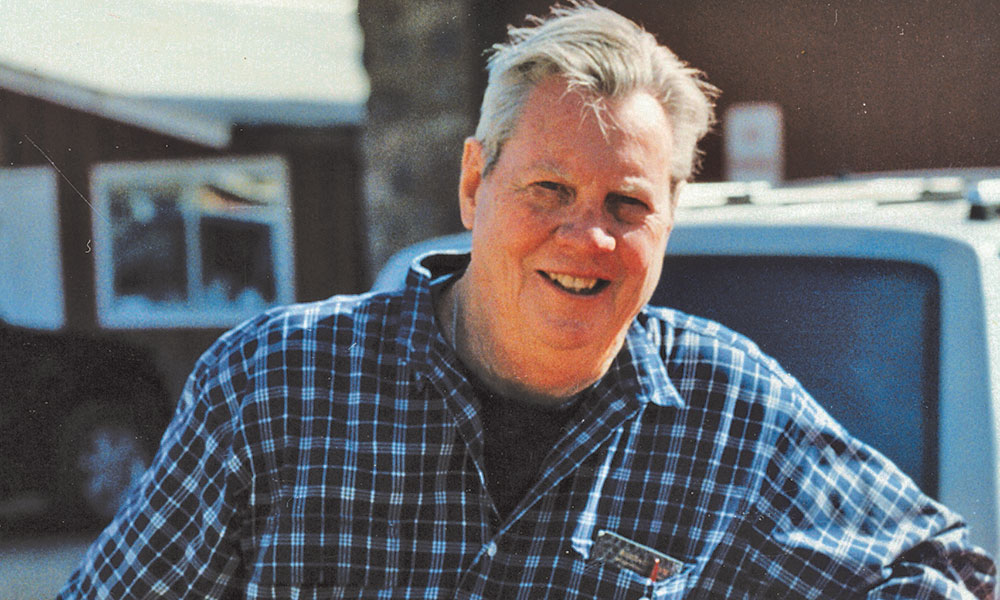 SCOTTSDALE (August 31, 2018) — On Friday night Jeb J. Rosebrook passed away at the age of 83 surrounded by his wife, son and daughter in Scottsdale, Arizona. He was an acclaimed writer for film and television, as well as a novelist, playwright and journalist.

Rosebrook began his career in the television and film industry with his first job at NBC in New York in 1956. After graduating from Washington and Lee University in Lexington, Virginia, in 1957, Rosebrook returned to New York to pursue his career in the entertainment industry, before moving West to pursue a career in advertising.

Rosebrook worked in advertising in Phoenix for three years before joining Foote, Cone and Belding advertising agency in Los Angeles in 1961. While working in advertising by day, he wrote his first novel at night. In 1965 E.P. Dutton published Rosebrook’s first novel, Saturday. In 1967, he left advertising to pursue his lifelong goal of writing for film and television. He renewed a friendship with friend, mentor and fellow writer, Earl Hamner, Jr. His friendship with Earl spanned 60 years and was a guiding light throughout Rosebrook’s career. In 1970, Jeb had his greatest break in Hollywood when producer Joe Wizan optioned his story “Bonner” and commissioned Rosebrook’s original screenplay Junior Bonner for actor Steve McQueen and director Sam Peckinpah. While not a box office success in 1972, today critics consider it a classic film, while both McQueen and Peckinpah both believed it close to their finest work.

After the release of Junior Bonner in 1972, Rosebrook became a sought-after writer for episodic television series, movies-of-the week, docudramas and Christmas specials. In addition to working with Earl Hamner on multiple episodes of The Waltons, Rosebrook worked with director Fielder Cooke on Miracle on 34th Street, producers David Wolper and Stan Margulies on I Will Fight No More Forever, producer Norman Rosemont on Prince of Central Park and producer Chuck Fries on The Winds of Kitty Hawk. In 1977, he returned to cinema and was a story and screenwriter for Disney’s The Black Hole (1979). He shared the story credit with Bob Barbash and Richard Landau and screen credit with Gerry Day.

In 1981, Rosebrook partnered with well-known Hollywood producer Joe Bryne (producer of The Johnny Cash Show), and as a writing-producing team, they enjoyed a successful partnership until Jeb’s passing, which included the production of the television series The Yellow Rose and The Outsiders, and the television specials, Hobo’s Christmas, The Gambler Returns: The Luck of the Draw, Black Fox: The Price of Peace and Four Diamonds. Over the course of his six-decade writing career, Rosebrook was nominated for two Writers Guild of America nominations for best television dramas, the two-hour episode of The Waltons titled “The Conflict,” and his adaptation of the novel, The Prince of Central Park. For I Will Fight No More Forever: The Story of Chief Joseph, he and co-writer Theodore Strauss received an Emmy nomination for Outstanding Writing in a Special Program – Drama or Comedy – Original Teleplay and the Christopher Award. For his shared screenwriting credit with Gerry Day for Disney’s The Black Hole, Rosebrook also received a Saturn Award nomination for Best Writing from the Academy of Science Fiction, Fantasy and Horror, USA, and a Hugo Award nomination for Best Dramatic Presentation.

Additional credits include “The Bugler,” an episode of The Virginian (which was pre-empted by the Apollo 12 moon landing on November 19, 1969), Kenny Rogers as The Gambler: The Legend Continues, the mini-series Mystic Warrior and The Christmas Gift, starring John Denver.

In recent years, Rosebrook returned to some of his favorite genres of writing: non-fiction, theater, novels and memoir. He was a contributing writer to Arizona Highways, True West and Harnett’s Sports Arizona. With Earl Hamner, he adapted The Waltons “The Conflict” into a stage play available through Dramatic Publishing, with permission of Earl Hamner and Warner Brothers. He published the first two volumes of his American Trilogy, Purgatory Road: The Road Between Heaven and Hell in 1951 Arizona, Forever More: Only the Beginning, when Charlemagne visits 1954 Virginia and meets God, Desegregation and Rock and Roll. At the time of his passing, Jeb was working on a  third volume, Wake Up Little Susie. Rosebrook also published in 2018, with co-writer Nel Jeppsen, his first Western, No Man’s Land, adapted from an unproduced script “Jack Ballard” for Sam Peckinpah and Steve McQueen. His final book, completed with his son Stuart, was his highly personal memoir, Junior Bonner: The Making of a Classic with Steve McQueen and Sam Peckinpah in the Summer of 1971. Jeb was also the featured interview in Mike Siegel’s highly acclaimed documentary Passion & Poetry: Rodeo Time, which was a special feature in Disney’s 45th anniversary re-release of Junior Bonner on DVD and Blu-Ray in the fall of 2017.

Rosebrook was born in New York City June 11, 1935, the son of John “Jack” Rosebrook, an acclaimed copyeditor at Young & Rubicam and Jean Fallon Rosebrook, an executive at King Syndicate. His childhood reads like a novel: raised in NYC and Connecticut before being diagnosed with childhood asthma and his parents sending him to The Quarter Circle V Bar Ranch School (today, the internationally acclaimed Orme School) outside of Prescott, Arizona, in early 1945. He was nine years old and he would attend boarding school the rest of his childhood. When not at the Orme School in Arizona (where he played multiple sports, competed as a roper, and worked on the ranch), or at St. Leo’s Preparatory School for Boys near Dade City, Florida, Rosebrook spent his summers living and working at his parents farm Falrose Farm, the largest wine grape farm at the time in Virginia, outside of Charlottesville, at Carter’s Bridge. With Christmas breaks either in New York or Los Angeles, and cross-country train rides in between school semesters, Rosebrook’s young life and adventures in New York, Arizona, Florida and Virginia shaped his life as a storyteller.

He spent 47 years in the Hollywood business, raising a family in Los Angeles, pursuing his dream. At the time of his passing, Rosebrook had been a Scottsdale, Arizona resident since 1995 and was still developing and writing for film and television, working on two novels and planning his next memoir. In 1996 and in 2016, in honor of the 25th and 45th anniversaries of the production of Junior Bonner, Rosebrook was the honorary grand marshal of Prescott’s Frontier Days Rodeo Parade. He was also a sought-after public speaker on film, television and writing, an educator who taught screenwriting at Arizona State University and Scottsdale Community College and an active member for years as a board member of his high school alma mater, The Orme School and an original faculty member of the school’s Fine Arts Festival.

Services are being held at All Saints Episcopal Church at 11 a.m. in Phoenix, Arizona, on Saturday, October 13, 2018. More details will be posted on his website (jebrosebrook.com) with additional information.

Jeb Rosebook Talks About Opening Night of Junior Bonner from Handstage on Vimeo.

Here are a few articles from True West about Jeb Rosebrook and his work: