by Phil Spangenberger | Jan 9, 2019 | Departments, Shooting from the Hip 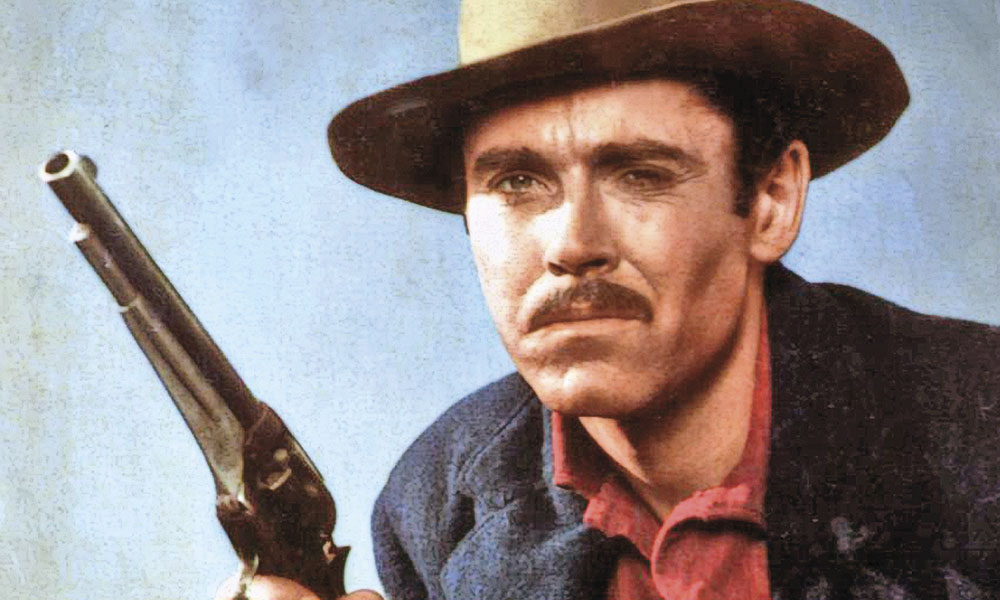 If you’re an Old West gun buff, and enjoy Western flicks from the Golden Age of Hollywood films, roughly 1930 through the late 1960s, you may have wondered about some of the six-guns used in a number of Civil War films. Looking suspiciously like the 1873 Colt Single Action Army (SAA), the smoke wagons have the percussion-era underbarrel loading lever assembly, giving them a Remington cap-and-ball revolver appearance. The guns in question had the familiar Peacemaker Colt fluted cylinder, where most of the large belt-sized caplock pistols had unfluted cylinders. Well, the truth is, those guns were indeed ’73 Colt Peacemakers—but with nonfunctional, cast metal underbarrel loading lever assemblies added to give them that 1860s look, while allowing their use of metallic cartridge “5-in-1” movie blanks.

This simple alteration to an 1873 Colt was a common practice with motion picture gun rental houses of the period. They’re hardly ever seen in currently produced films, largely due to the great number of authentic replicas of Civil War period six-guns—many that have been converted to take metallic cartridge blanks—and a more gun-wise audience that demands a greater degree of authenticity. The studios save countless hours in costly production time by using the faked ’73 Colts, or modern replicas converted to metallic cartridge, by not having to keep multiple loaded guns ready for filming, or taking the time needed to load a caplock six-shooter.

Some examples of these faked six-guns are in 1940’s Santa Fe Trail, with Errol Flynn and Ronald Reagan; and two 1941 films—Errol Flynn’s Custer epic, They Died With Their Boots On, and Robert Young’s Western Union. The 1950s saw the dummied-up Peacemakers used in Randolph Scott’s Western Hangman’s Knot (1952). Love Me Tender (1956) saw Elvis Presley packing an ersatz 1861 Remington—a faked ’73 Colt—in the final shootout, and the 1957-1958 TV series, The Gray Ghost, with Tod Andrews as Confederate raider Maj. John S. Mosby, used fakes. Veteran character actor Ward Bond also carried one from 1957-1961,
in his TV series Wagon Train, as did many other actors of the era including John Wayne, Gary Cooper and Lee Marvin. In rare instances, such dummy loading levers were made for other revolvers, although it is the ’73 Peacemaker, disguised as an 1860s Remington, that dominated the Western movie caplock scenes for decades.

Another cinema secret used in films allowed non-gun-savvy actors the ability to fire their six-shooters faster than they could shoot a real single-action Peacemaker. To do this the studio prop man would give the actor a Colt New Service Double Action (DA) revolver, a wheel gun produced by Colt from 1898 through 1944, with a Peacemaker-type ejector housing added to give it the looks of the old frontier ’73 Colt SAA.

If you watch carefully, or freeze-frame a video of Marlon Brando’s 1960 classic One Eyed Jacks, you’ll catch the actor speedily blasting an hombre in the saloon shootout scene not with the Model 1873 Colt Single Action he carries in the rest of the movie but blazing away with a New Service DA model with the added appendage. A couple of other trail dust sagas that relied on the New Service DA wheelgun with the SA ejector housing added are the 1968 Western  5 Card Stud, in which star Robert Mitchum rapidly fires his six-shooter, and the 1990 made-for-TV movie El Diablo, with Louis Gossett Jr. portraying a professional gunman.

These are just a couple of the illusions filmmakers use to give us the “movie magic” action scenes we love so much—all for the sake of entertainment.

Although Ten-X Ammunition Inc. has discontinued most of its extensive line of Old West and other hard-to-find ammo, the company still offers the two most popular lead bullet rounds used by Cowboy Action Shooters. The . 38 Special and .45 “Long” Colt. Ten-X’s .38 Special loads are available in either a 105-grain Truncated Flat Point loading that produces 593 feet per second (fps) or a 130-grain Round Nose Flat Point (RNFP) that moves out 578 fps. The .45 Long Colt loads are offered in a 200-grain (585 fps) or a 250-grain RNFP (695 fps) round. For competition or just plain fun shooting, give Ten-X ammunition a try. I’m sure you’ll like it.