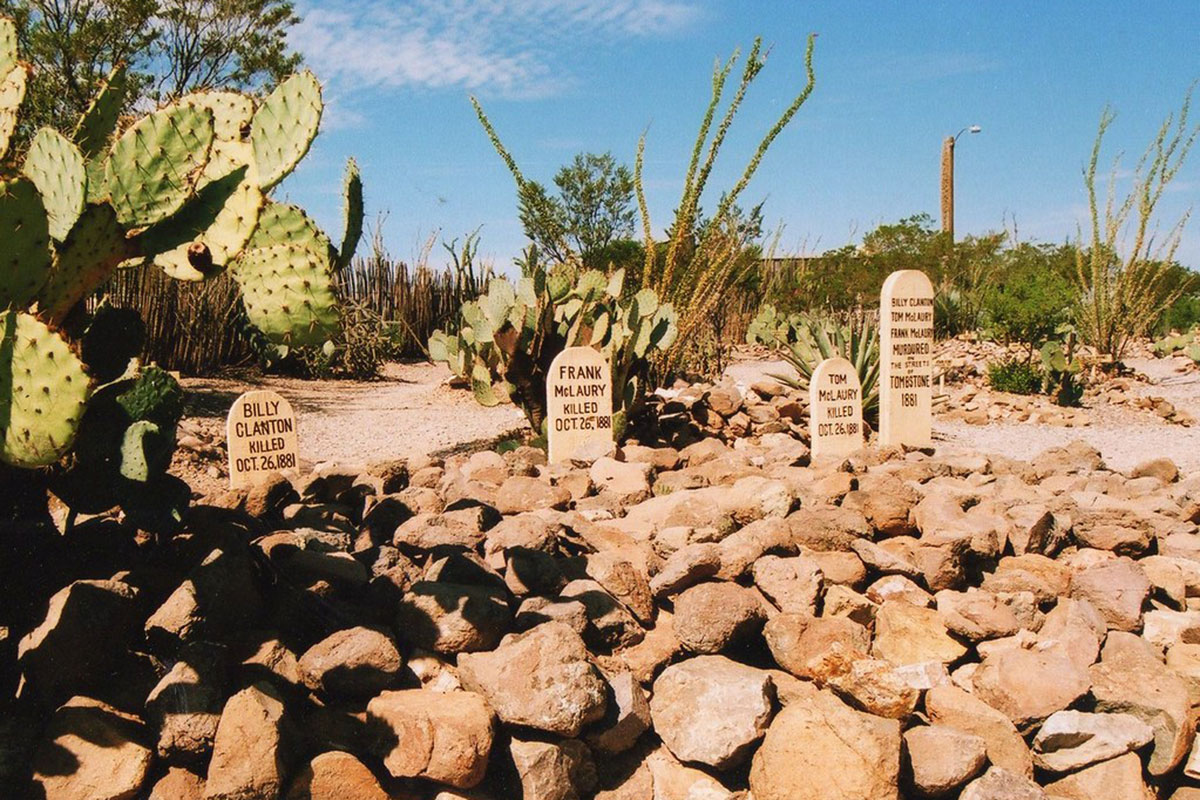 A few years ago I was in Tombstone working with a film crew from the United Kingdom. Naturally, one of the sites they wanted to include was the town’s storied Boot Hill. They were mostly interested in the graves of Billy Clanton and Frank and Tom McLaury.

The director was looking at the photo of the three in their coffins and asked if they were actually buried in those ornate boxes. I told him the boys had an elaborate funeral parade through town so I would assume they buried in those coffins. Tom McLaury was carrying nearly $3,000 when he was shot down by Doc Holliday in that October, 1881 gunfight.

Perhaps I shouldn’t have volunteered this piece of information but I told him we didn’t really know if Billy and the McLaury’s were actually buried beneath those markers. There was a long pause and he looked at me as if I’d just told his children the Easter Bunny and
Santa Claus weren’t real.

I explained that this wasn’t uncommon. Lots of famous Old West characters tombstones don’t mark the spot where the body is actually buried. But this was usually done intentionally to prevent grave robbers from doing their thing. For example no one is certain whether Doc Holliday is buried in Colorado or Georgia.

Boot Hill became the final resting place in 1878 and lasted until 1884 when the new cemetery opened west of town. Tombstone went into decline as the mines played out and the site was allowed to return to its natural state until 1929 when the West was fading from reality into myth.

The locals were planning to celebrate the first Helldorado Days, named for Billy Breakenridge’s book by the same name. Old timers including Tombstone mayor and editor of the Epitaph, John Clum and former Cochise County deputy sheriff, Billy were among the guests.

Boot Hill was resurrected for the ceremony forty-five years later but time had taken its toll the old cemetery. The grave markers were gone and rain, erosion along with the winds of time had erased the identities of the deceased. Clum couldn’t say for certain where his wife was buried.

So, to make the best of a bad situation new markers were created and planted in the same general area. Billy Clanton and the McLaury brothers may or may not be where they were originally buried.

The director sent me a copy of the film after it was released. I noticed the part where I talked about the bodies wound up on the cutting room floor.

He could have written, “This is the West sir. When the legend becomes fact, print the legend.”