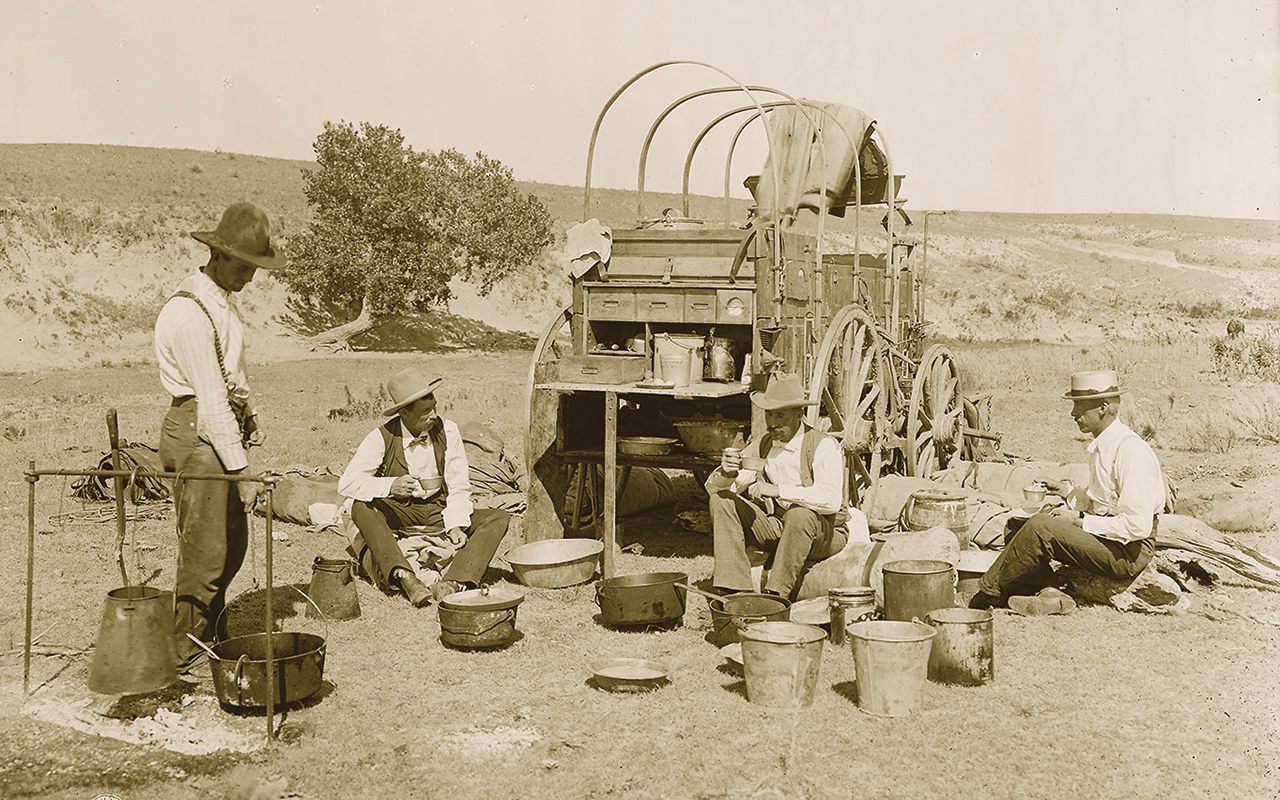 The humble biscuit quieted the growls of many hungry pioneer stomachs and sometimes served as their only meal. Biscuits were enjoyed with butter, honey,  jam or gravy and served in Nebraska sod houses, fancy frontier hotels and along dusty cattle drives. Even though most pioneers enjoyed biscuits, none were more particular about them than the cowboys. Their chuckwagon cook was either loved or hated based on the quality of his biscuits. The good ones were called “dough gods” while the bad ones were called “belly cheaters.” A scene from Lonesome Dove captured the pride and appreciation for a good biscuit baker. McMurtry’s character Jake asks Gus, “What’d it take to get you to whip up another batch of them biscuits? I’ve come all the way from Arkansas without tasting a good bite of bread.”

A real frontier biscuit maker named MacMillan “Mac” hired on with an outfit near Vinita, Oklahoma, in 1882 as their cook. According to the article “The Fighting Cook” in the June 29, 1891, San Francisco Call, he was their sixth cook in six weeks because the cowboys were rough and mean as they drove the cattle to Kansas. One morning the men started harassing Mac about the pork and coffee as he made breakfast, but he ignored them. The biggest man in camp was Joe Taylor who told Mac he’d better improve his biscuits by the noon meal or else. Mac’s pipe dropped from his mouth, but he let Taylor finish his rant. He then calmly walked over to the wagon and returned with his Colt revolvers. With a wicked look in his eyes he shouted at Taylor, “You ain’t got no appetite, but you sit down and eat all them biscuits or I’ll plug you before you can wink. Eat them biscuits!” Taylor ate the entire pan and could barely move as the other cowboys chuckled. Mac then said, “I thought you would soon find your appetite.” He then turned to the rest of the cowboys to inquire how they liked their coffee and pork. They unanimously agreed that his cooking was just fine.

Biscuits came in many varieties and were made with baking soda, baking powder or various forms of yeast. The flour used on the frontier was far different from what’s used today. Today’s biscuits are white, soft and fluffy, but that’s not exactly what they were like in the 1800s. Common wheats of the time included Sonora, red fife, and turkey red, which was milled into flour and used to make biscuits and other baked goods. Flour was sometimes sifted to achieve a smooth consistency, but that was usually done for certain recipes like light cakes and soft breads. It wasn’t until the late 1800s that flour started becoming refined and stripped of its flavorful and healthy bran and the germ. Women bakers scoffed at it in the beginning because the flour had no taste and they added flavorings to their baked goods.

If you want to make biscuits like the pioneers did, get some historic flours like Sonora or Turkey Red from Barton Springs Mill in Texas, Bolted Turkey or Golden Buffalo from Heartland Mill in Kansas, Red Fife from Camas Country Mill in Oregon, Sonora or Artisan from historic Hayden Mills in Arizona or use modern-day flour from the historic War Eagle Mill in Arkansas.

Combine dry ingredients in a bowl and stir to mix. Cut the butter into the flour until it becomes pea-sized. Stir in the milk just enough to combine, but don’t overmix. If the dough seems too dry, add one tablespoon of flour at a time. Turn out onto a floured surface and roll to 1-inch thickness. Cut into biscuit shapes and place on a baking sheet. Bake at 425 degrees for about 15-20 minutes or until golden.