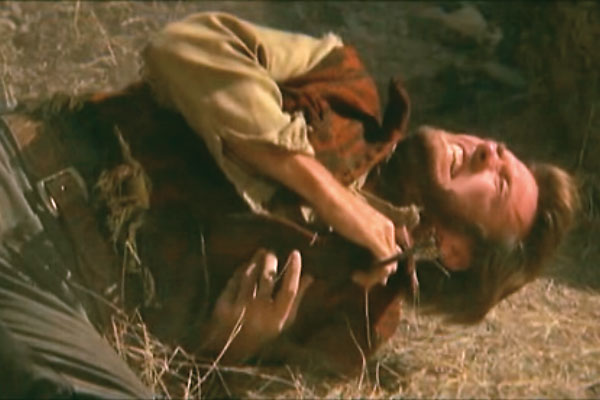 During the medically captivating scene in 1970’s Two Mules for Sister Sara, Hogan (Clint Eastwood) lay in pain for about 70 minutes after being shot through the shoulder by a Yaqui Indian Arrow.

Hogan is attended to by Sister (actually, prostitute) Sara (Shirley MacLaine), whom the gunfighter has asked to embark upon the critical task of removing the arrow. The head of the arrow passed completely through his clothing and shoulder, and is sticking out his back.

At the request of Hogan, Sara gathers some river moss that he says will “stop his flesh from putrefying.” The arrow appears to have entered Hogan’s shoulder just below and at about the midpoint of the clavicle (collarbone). Consuming whiskey by the gulp, Hogan asks Sara to cut a groove in the arrow shaft “deep enough for a good pinch of gunpowder.” He says, when lighted and pushed into the wound, the burning powder “…will cauterize the inside, they tell me.”

After Sara fills the groove with gunpowder, Hogan tells her to cut and then break off the arrow shaft. Still somewhat cognitively intact, Hogan then slurs, “Now comes the hard part, ’cause we got to time this perfect. As soon as I light the powder [with the famous “Eastwood” cigar], you drive the arrow through me and pull it out the other side.”

Hogan replies, “Take the knife and put the flat part over the end and hit it with [my] gun…and please Sister Sara…please hit it a straight blow, not a glancing one.”

“What if I don’t hit it straight?”  asks Sara, to which Hogan groans,  “The arrow will break off inside me.”

Then Sara asks, “What do I do with the moss?” Hogan replies: “Plug the holes, both sides. Push it in about half an inch.” He then mutters, “All right, one last swallow, and it’s up to you Doc.”

At the moment Hogan lights the powder, Sara, with unexpected skill and a single blow, punches the flaming powder into the wound, causing both Hogan and undoubtedly some members of the audience to lapse into unconsciousness. As instructed, Sara then scrambles behind Hogan and pulls the entire shaft through his shoulder.

The Yaqui arrow she pulls out of him appears to have a small, sharply acute, v-shaped, unbarbed head. Anatomically, Hogan is very fortunate, since the arrow miraculously missed any vital structures. The latter is surprising, since the arrowhead should have easily hit bone, nerves and vessels. Especially at risk should have been the brachial nerves to the left arm, perhaps the subclavian vein and/or artery, a portion of the second rib or the top of the scapula (shoulder blade). The head of the arrow could have also easily caught the apex (top) of the upper lobe of the left lung causing a pneumothorax (collapsed lung) and a lethal outcome with bleeding into the chest cavity.

Hogan’s request that his wound “holes” be packed with “moss,” however, adds a medically accurate, important treatment dimension to his ordeal. Although the type of moss is not specified, there is a reasonably high probability that using almost any moss as described may have helped to prevent infection. Some modern researchers have concluded that certain moss-associated molds (e.g. penicillium) or even bacteria may be the real source of antibacterial activity in some of the moss species found in the dry climate of northern Mexico where Hogan was wounded.

This dramatic depiction of treating a seemingly uncomplicated arrow wound, in the absence of formal medical attention, is fairly realistic. I give the scene a medical “B-plus,” for two reasons. Two markdowns (from perfect A-plus) are earned because Hogan was spared injury to anything anatomically important, an unlikely scenario given the size and trajectory of the arrowhead, not the shaft. Another markdown is earned by his not unexpected, unrealistically rapid recovery. After all, within hours, he blows up a bridge trestle, wrecks a train and kills a dozen “bad guys,” before he jumps, fully clothed, into a bathtub with “Sister” Sara, once her clerical ruse has been discovered.