Ranch Style on a Budget 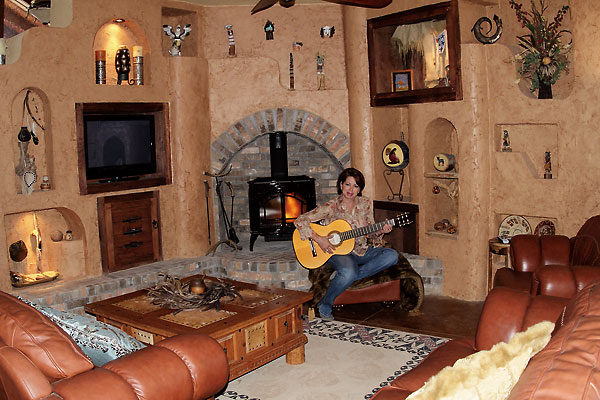 Jodi Finkenbinder did not just imagine what her new home could be, but she actually rolled up her shirt sleeves and helped create it.

Starting with ideas from previous homes she has worked on as an interior design consultant and with inspiration from magazine photographs, Jodi utilized a computer program to create the floor plan for the home near Gainesville, Texas, that she shares with husband Tim and their 15-year-old son Trent.

Jodi envisioned the house and then worked side-by-side with builder Gary Patterson to construct it in 2009. After selling a larger house and ranch, the family downsized to 2,650 square feet of living space. Situated on a hill under large, old oak trees, the home features green design elements, including foam insulated walls and instant hot-on-demand hot water. Jodi also installed windows rated for the cold temperatures of Minnesota to improve energy efficiency, even though the family lives in a humid subtropical climate typical of northeastern Texas.

Exterior features include rock and stucco patterned to make the structure look much older than it actually is. A sun design at the front door is carried inside the home with a half-round soffit (the covering on the underside of the overhang) in the living room that comes down to make a sun.

Yet as artistic as this ranch home looks, it also is practical, as the Finkenbinders raise and train horses on the property. A great example of how Jodi has created a functional, yet stylish, environment is evident in the poured concrete floors, enhanced with grooves and stained to give them color. That is sensible on a ranch where men and boys don’t always remove their shoes when returning from the barn.

To encourage people to look up at the ceilings, Jodi left the floors as simple as possible, with few rug coverings. Beyond the sun design on the living room ceiling, the kitchen ceiling is concave and Jodi used joint compound and custom mixed stain to replicate the old brick and stucco look that is found on the exterior walls of the home.

Nooks and niches in the living room and foyer area are a design element that provide space for a collection that includes artwork and artifacts, such as an Indian war shirt (Jodi is not certain whether it is Modoc or Klamath). One nook is a water feature that includes three different copper looks: tarnished copper, burnished copper and copper aged to a green patina. Jodi is herself an artist, working with organic media such as steer heads and gourds; she creates mosaics on the former and paints on the latter. She also sculpts bronzes, working in her La Mujer Studio, which adjoins the house just off the hacienda carport and boasts its own Southwestern front.

Jodi admits she did not have an unlimited budget for the home, but she did have an unlimited imagination. She stretched her finances by innovation, doing much of the work herself. Her “cowboy bathroom” has a shower head extending from beneath a barrel. “I detest those white fiberglass shower units,” says Jodi, admitting she did not have enough money in the budget for a rock-and-tile shower in that bathroom. So she decided to use galvanized metal for an enclosure, forming it to represent a barrel, complete with galvanized strips that look like barrel staves that carry the design element of the barrel from top to bottom. The vanity top is a salvaged piece of ironwood, while the sink itself was made from an old pot that Jodi owned.

For the master bath she did have the budget for tile and rock, but she also saved on construction costs by doing the work herself. The master bedroom also benefited from her work ethic. Wanting a “lodge” look, she found some two-by-12 boards in a pile at a salvage yard. Although they were extremely weathered and even moldy in places, Jodi hauled them home, cleaned them up, sealed them to preserve the wood and then placed them on the wall of the bedroom, leaving space between each board and adding grout or “chinking” to make it appear like an old homestead cabin made of logs.

The open kitchen features a dark wood center island and cabinets that Jodi created and stained with a custom mix that gave her the rich reddish color she sought. The concave ceiling is accented by unique lighting fixtures, including one made from two saddle trees. Not able to lay brick on the ceiling, she created her own faux brick look. Although Jodi admits her arms ached following that effort, she successfully achieved the look she wanted.

Jodi Finkenbinder created a home for her family that is several parts hard work mixed with a hefty dose of imagination. She utilized organic materials like wood, added angles and shapes to create unique rooms, and decorated with the touch of an artist.