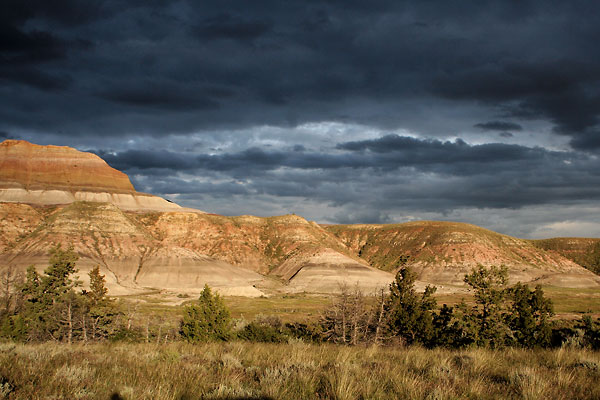 Indian trade routes criss-crossed the country generations before any Euroamerican travelers arrived on foot, horseback or via covered wagons.

The native people used the trading routes to exchange goods predominant in one area but rare or harder to obtain in another area. One of the common routes in the West linked the Pueblo Indian communities in present-day New Mexico with the Northern Plains tribal areas along the Missouri River in present-day North Dakota.

This route—known by some as the Old Snake Trade Route—provided a conduit between Santa Fe, New Mexico, and other Spanish/Indian towns, and the Mandan Villages in the Dakota Territory. Once in what is now Wyoming, the route branched off to the west to other trade centers, including one near the site of what would become Fort Bridger and others as far west as Ceilo Falls and The Dalles on the Columbia River in Oregon.

The first reference I ever saw to this route was in a history of Wyoming written by C.G. Coutant, who said trapper Ezekiel Williams traveled it in 1807. I saw later references in materials researched and written by another Wyoming historian, Lola Homsher, who said the first documented use by a white traveler was Williams, but that he went over the route in 1810 or 1811. Both agreed native people had used it long, long before that.

In a sense I feel a bit of kinship with this particular route, since it passed through the valley I call home and, in all likelihood, people using it would have gone very near my house, located near Encampment, Wyoming. Even so, to make this a more linear trail, I’ll begin this journey over the Old Snake Trade Route in Santa Fe and travel north.

Celebrating its quadricentennial (400 years of existence as a city) this year, Santa Fe is one of the oldest communities on this particular route, though, of course, some of the Indian pueblos have been in place far, far longer.

Visitors to Santa Fe can experience the trading culture at the 1610 Palace of the Governors, where native artisans spread their wares on blankets and rugs, selling everything from necklaces, bracelets and hair barrettes to knives. If you want to engage in some serious trading, attend the Santa Fe Indian Market (held this year on August 21 and 22), which attracts hundreds of Indian vendors. At other times of the year, and all around the plaza, you’ll find numerous shopping, dining and lodging opportunities. Then get back on the road, where you’ll travel north on U.S. 84 through Espanola and follow Highway 68, heading toward Taos.

Before you go to Taos, you should first make a stop at Chimayo to visit Ortega Weavers, so travel west from Espanola to Highway 76. At Ortega, you can find some of the top quality products of the region, ranging from rugs and wall hangings to clothing items like coats or vests.

From Chimayo, take the High Road (Highway 76), driving through Cordova, Truchas and Las Trampas. This diversion connects with Highway 75, which you can either drive east to Highway 68 or continue west to Highway 518, following the road north toward Taos. The drive takes longer, since it is a mountain route, but the varied scenery is well worth the detour.

Taos Pueblo reflects very well the longevity of indigenous people along this trade route; the pueblo has been inhabited for more than 1,000 years. The crumbling walls of the church, where residents of the pueblo sought refuge during the 1847 Taos Revolt, and the nearby burial ground are tangible reminders of not only the longevity, but also the trials and tribulations of the people who have called this area home.

Like Santa Fe, today’s Taos is a vibrant community with plenty to entice travelers and shoppers. You’ll find anything from a good book to a drum to a pair of knee-high leather moccasins. For an overnight stay or refreshment break, you should visit the 1936 Taos Inn and its Adobe Bar.

Leaving Taos, you should head northeast on U.S. 64 to Tres Piedras and continue northwest on U.S. 285 to Alamosa, Colorado. This route will take you due north through the San Luis Valley on Highway 17 to Mineral Hot Springs, where the route remerges with U.S. 285, taking you to Buena Vista. The drive through this section of Colorado—from Alamosa all the way to Buena Vista—is a visual treat from the open country of the San Luis Valley to the spectacular peaks that form the Continental Divide west of Buena Vista.

Continue north on U.S. 24 to Leadville, one of the highest elevation towns in the country. This historic silver boomtown is a must-see stop on the route. I recommend visiting the Heritage Museum, the National Mining Museum and Hall of Fame, and taking in a performance at the 1879 Tabor Opera House.

Highway 91 will take you out of Leadville and over Fremont Pass to merge with Interstate 70 at Copper Mountain. You won’t find much Indian heritage at this popular ski resort or at any of the Colorado towns you’ll be driving through to get to Wyoming. Yet history buffs might want to check out Fremont Pass, if you have the time. Guided by Kit Carson, explorer John C. Fremont discovered this Rocky Mountain pass in 1844 during his own travels in present-day Colorado.

Looking for Peace at the Hot Springs

Your next destination—Wyoming, my home state! Colorado’s Highway 125 becomes Highway 230 when it enters Wyoming. This highway follows very near the Indian trade route, which also became a part of the Cherokee Trail to California after 1850.

I’d be remiss if I did not invite you to stop at the Grand Encampment Museum. Its collection of Indian artifacts ranges from beadwork to stone points and tools. You can visit the museum from Memorial Day through Labor Day and on weekends in September. Admission is free, but like most museums, it will gladly accept donations.

From Encampment, you should resume your trip north on Highway 230, which turns into Highway 130 just 10 miles north of Encampment, and head into Saratoga. Indians from the Northern Ute, Arapaho, Shoshone and Sioux tribes originally camped near here, taking advantage of the hot mineral springs that are now a part of the Saratoga Hot Springs Hobo Pool (open free of charge around the year). Although the tribes occasionally fought battles with each other, historical reports confirm that, in the vicinity of the warm springs, the various tribes set aside their weapons, considering the mineral pools to be neutral ground.

During your visit, you should also soak in the hot mineral pools at the Saratoga Inn Resort. After your relaxing dip, you should go shopping, picking up some good cowboy duds at Hat Creek or  artwork at the Blackhawk Gallery (which I started with a friend back in 1982!).

Next up is Fort Washakie, the headquarters of the Shoshone tribe, which shares its Wind River Reservation with the Northern Arapahos. From Saratoga, you’ll want to head north on Highway 130 to Interstate 80. Then you should travel west to Rawlins, before you turn north on U.S. 287 to Lander and Fort Washakie.

One of my favorite stops at the fort is the Gallery of the Wind, which offers a remarkable, museum-quality collection of Shoshone tribal items ranging from weapons to clothing. To learn more about Shoshone heritage, head east to Ethete and visit the Shoshone Tribal Interpretive Center.

To get a good dose of Northern Arapaho culture, I recommend you visit the Heritage Museum and the St. Stephens Mission, which, since 1884, has had charge of the Arapaho Indians occupying the southeastern part of the Wind River Reservation. You’ll find both Arapaho cultural sites by taking Highway 137 to St. Stephens.

Heading to Some Rockin’ Art

With the Wind River Basin behind you, head into the Bighorn Basin by traveling northeast on U.S. 26 through Riverton to Shoshoni, and then north on U.S. 20  to Thermopolis.

The Shoshone Indians ceded a portion of their reservation in an event recognized annually in Thermopolis as the Gift of the Waters, to be held August 7, which memorializes their transfer of lands that included hot mineral pools. Like in Saratoga at the Hobo Pool, you can enjoy a free soak in Thermopolis at the Wyoming State Bathhouse. If you’re looking for a more multi-faceted hot water experience, check out one of the commercial pools in the community.

You’ll definitely want to make a stop at Worland, north on U.S. 20, as a new museum just opened up in May. While much of the Washakie Museum and Cultural Center will involve exhibits related to paleontology, some exhibits share the stories of indigenous people, interpreted from discoveries made by archaeologists working in the region.

As you head north out of Worland on U.S. 20, I highly recommend a detour on Highway 31 east to Hyattville to visit Medicine Lodge State Park. At Medicine Lodge, you can take in more than 600 outstanding petroglyphs, “including some of the largest carved shields and animals on the Northwestern Plains,” note authors James D. Keyser and Michael Klassen in their 2001 book Plains Indian Rock Art.

After a respite at Medicine Lodge, return to Greybull and drive west across the Big Horn Basin to Cody for a must-stop visit to the Plains Indian Museum at the Buffalo Bill Historical Center. While at the historical center,  you should also take the time to visit the Whitney Gallery of Western Art, where you can view impressive Western artworks by historic artists Karl Bodmer and Frederic Remington, and contemporary artists Arthur Amiotte, Kevin Red Star and James Bama.

The Old Snake Trade Route continues north on Highway 120 to cross into Montana, where the highway changes to Montana 72, as you drive through Belfry and Bridger. For this Renegade Road, you’re just going to be driving through this beautiful state, as the next stop is the North Dakota ranch that Teddy Roosevelt once owned.

At Laurel, you’ll want to turn east on Interstate 90 through Billings, and take Interstate 94 to  Medora, North Dakota, home to the Teddy Roosevelt National Park. Wild horses run in this natural range, so you won’t want to miss seeing them at the park, before you head east to Bismarck and Mandan.

This region of North Dakota was home to Fort Mandan, where Ezekiel Williams returned Sha ha ka or Big White, the chief of the Mandans, after his travels to Washington, D.C. with Meriwether Lewis in 1806. The captain had made the offer to take Sha ha ka to Washington in gratitude for the aid the chief gave him and William Clark when they first reached the area in 1804.

Centuries ago, Indian traders would travel the Old Snake Trade Route to Fort Mandan to exchange the turquoise and silver they brought with them from the region around Santa Fe and Taos, New Mexico, for corn, squash, beans, buffalo hides and other products common on the Northern Plains and among the Mandan tribe.

On-a-Slant Village—west of the Missouri River in Mandan at the historical site of Fort Abraham Lincoln—offers reconstructed lodges that allow visitors to experience what the Mandan village would have been like when occupied by the original inhabitants beginning in about 1575. After you experience the Mandan traditions at the village, I know of no better way to wrap up your journey than with a visit to Five Nations Gallery and Gifts in Mandan, where there are oh so many choices of trade goods you can take home.