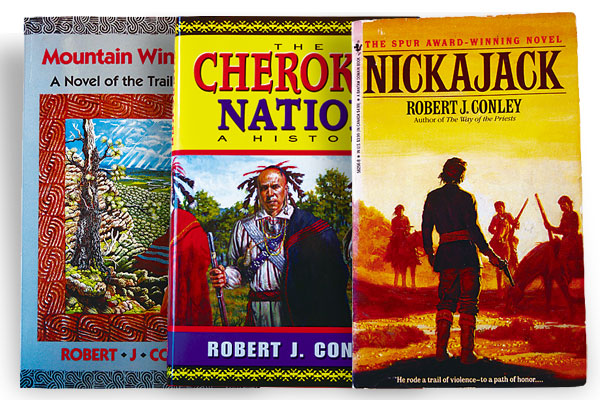 I knew Robert J. Conley was not your typical Western writer when he came up to me and fellow author John D. Nesbitt at an Albuquerque bar and started quoting-not Louis L’Amour or Larry McMurtry (don’t get Bob started on McMurtry, by the way)-Lord Byron.

The taciturn Conley, born in Cushing, Oklahoma, in 1940 is a genius. He takes over as president of Western Writers of America in June in Knoxville, Tennessee, becoming the first American Indian—he’s an enrolled member of the United Keetoowah Band of Cherokees—to serve as the organization’s prez. He also brings to it a certain wit and dry sense of humor.

On the Little Bighorn: “There was a BAE [Bureau of American Ethnology] ethnologist with Custer. He didn’t turn in his report.”

On his goals for WWA: “To not get impeached.”

On when he knew he wanted to write: “I never did. I’ve never made up my mind yet what I want to be.”

Actually, Ned Christie, the famous Cherokee statesman-turned-“outlaw,” decided Conley’s career path—or rather a bunch of white writers who tried to write about Christie did. “I got pissed off at some of the stuff written about Ned Christie, and I decided I’d write something and fix it. That’s all I was thinking: I’ll get those sons of bitches. Boy, I killed a lot of marshals.”

His first novel Back to Malachi was published in 1986. He won his first Spur Award for his 1988 short story, “Yellow Bird: An Imaginary Autobiography,” and picked up Spurs for his 1992 novel Nickajack (for my money, one of the best novels about Cherokees ever written) and 1995’s The Dark Island. He also wrote the novelization of Geronimo: An American Legend, the 1993 film that starred a good friend of Conley’s, fellow Cherokee Wes Studi. Other titles include Ned Christie’s War, The Dark Way, Mountain Windsong and The Long Way Home, but he doesn’t write just about Cherokees.

His 1990 novel Quitting Time features hired gunman Oliver Colfax taking a job so he can catch a performance of Shakespeare’s “Titus Andronicus.” In 2000, Conley introduced a character who could best be considered the anti-Marshal Matt Dillon of Gunsmoke fame in Barjack, a novel best described as “High Noon on acid.” He has also written poetry.

In 2005, the American Library Association selected his nonfiction The Cherokee Nation: A History as one of that year’s Outstanding Academic Titles.

“Anything I ever learned I think I learned in spite of school,” he says. “I was always on the verge of getting kicked out of school.”

In fact, he was kicked out for a semester at Midwestern University in Wichita Falls, Texas, for refusing to attend compulsory Reserve Officers’ Training Corps (ROTC) in the late 1950s. But he won that battle. “I got compulsory ROTC kicked off of campus,” he says.

He went on to earn a bachelor’s degree in drama and a master’s in English from Midwestern, and he has taught at a number of colleges.

Get ready, Western Writers of America. It’s gonna be a fun ride.