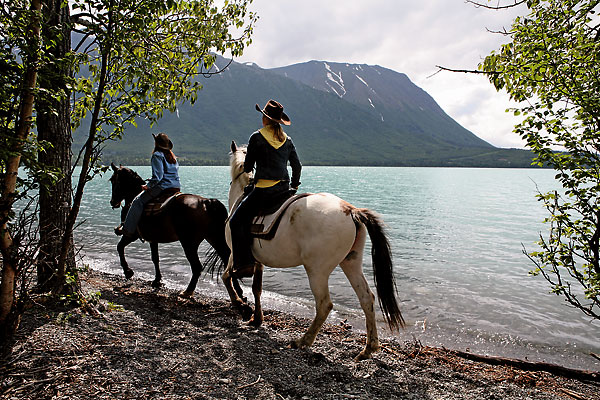 I feel rather adventurous while horse riding in the Cooper Landing area on Alaska’s Kenai Peninsula, but I have nothing on Charles E. Chapman, who set out to find gold here in 1898 and 1899.

While I am dealing with extreme terrain and the possibility of a bear encounter, I am also riding in July, blessed with almost 24 hours of sunlight. Time is certainly on my side as I ride my Paint horse Harley, aptly named, alongside a modern highway toward Kenai Lake.

Chapman began his Cooper area journey in early spring of 1898, according to a series of letters owned by Chapman’s California relatives. Mona Painter, a local historian with the Cooper Landing Historical Society Museum who has been studying Cooper Landing’s history for more than 50 years, shares this correspondence with me. While sluicing for gold for the Towle and Stetson Mining Company, Chapman and his team dealt with harsh weather and terrain, competitive mining bandits, dangerous accidents and little food.

Joseph Cooper discovered gold here in 1884. Russian prospectors had found gold back in 1848. By 1896, the Kenai Peninsula was a hot spot for gold seekers, many from the American West and Canada. Two years later, the men from the Towle and Stetson Mining Company traveled to Seward, Alaska, by train from California and boat from Seattle, Washington, bringing horses, equipment and supplies with them. Their destination was Cooper Creek, but traveling inland was no small feat.

They had a five-to seven-day journey after they landed in Resurrection Bay, and they began their trek across snowy land. Horses pulled heavy sleds, carrying piping and bales of hay—supplies they would need that they couldn’t obtain in Alaska’s wilds. Once they reached the south end of the frozen Kenai Lake, they encountered one of the most dangerous parts of the trip. Traveling across the treacherous ice, they slowly relayed supplies in the horse-drawn sleighs. The team wasn’t always sure about the amount of weight the ice could hold; men carried lifelines, so that if they broke through, they could be salvaged from the icy waters. According to Chapman’s letters, men and horses from his team did fall through the ice, but fortunately none were lost.

On my Cooper Landing ride, my guide Michelle Donahue and I stop along the shores of Kenai Lake. Standing along the banks I stare across its milky turquoise waters to the jagged, snow covered peaks, which quickly rise to the sky.

After crossing Kenai Lake, the miners would have gotten a boat in Cooper Landing and headed down the Kenai River. Chapman’s letters report that the miners lost everything except a surcingle (strap that goes around a horse’s girth) and teaspoon when their boat capsized along the river. Their problems didn’t end there. Once Chapman and his team reached the Towle and Stetson Mine, they found that their camp had been ransacked by a team of competitive miners from the nearby Sunrise settlement. Even amid all of these setbacks, the miners never gave up. The pull of the gold was too great.

Donahue and I continue our trek up through the Chugach National Forest along the Russian Gap Trail, a route that gold seekers from Russia traversed during the 1850s. Riding through the forest, we climb up uneven terrain, getting farther and farther away from civilization and seeing more of what Chapman might have seen as he hunted for food in this area of alpine tundra.

I stick out my hand to feel the sections of the tall thin trees where the back is missing. In the winter, when food is scarce, moose sometimes eat the bark off the trees. The miners too ate anything they could find, including porcupine, which Chapman wrote that he didn’t like because it looked too much like skunk. Bear, grouse and, if they were lucky, moose were also on the menu. Chapman once trailed a moose for three days, only to lose him.

Life was hard for the miners. Not only was meeting their everyday needs a challenge, but searching for gold was backbreaking work. Miners used picks and shoveled gravel into sluice boxes, while slapping away the mosquitoes. Chapman wrote in one letter that the bugs had caused his skin to erupt into welts. In what’s thought to be his last letter from the expedition, written in August, he stated that he hoped to be back to California by October 25th. He wrote, he would “enjoy living in civilization again.”

While I am not seeking gold on my ride, I do see a bear, thankfully in the distance. As we rest at a lookout point, I daydream about all the modern-day prospectors who are still searching for gold in Cooper Landing.