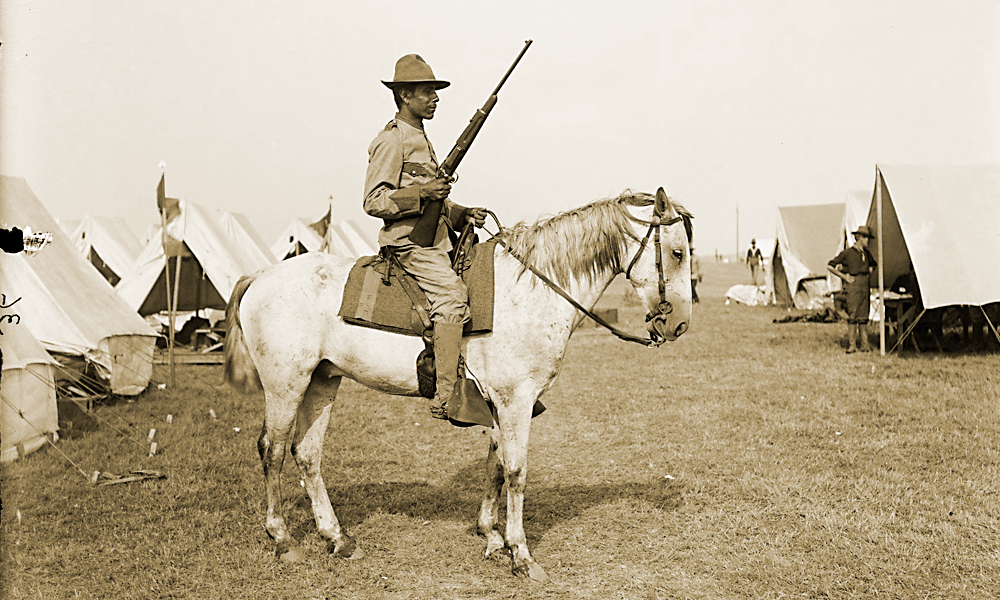 “Well, I have learned a little of the soldier’s life; I have learned how to make a charge when the command is given, and how to stand my ground and stay with the boys during the battle, and also that some of the boys had to fall.”
—William Pollock, Troop D

Cuba, July 1, 1898. That afternoon was a footrace to the top of San Juan Hill. United States Army Lt. Col. Theodore Roosevelt and some 300 men—a mix of Rough Riders and white and black Regulars—ran through the tall grass, Mauser bullets cutting the air around them. Suddenly, over the gunfire, Rough Rider William Pollock let loose an “ungodly war-whoop.” A huffing and puffing Roosevelt turned to his orderly and shouted, “Holy Godfrey, what fun!”

Roosevelt would later describe the charge up San Juan Hill as the most joyous experience of his life, and Pollock’s uncanny war whoop, timed to perfection, would forever echo in his memory.

Pollock was a Pawnee Indian. When he was born in 1871, not far from the banks of Nebraska’s Loup River, his parents named him Taloowayahwho. He got his white man name at the agency school. At the age of 13, he enrolled at the newly opened industrial training school for Indians located in Lawrence, Kansas, soon known as the Haskell Institute.

The young Pollock immediately demonstrated a natural talent as an artist. In the school’s wagon shop, he ornamented wagon side panels and end-gates with Indian portraits and eagles with outstretched wings.

Following graduation from Haskell, Pollock studied art for two years at the University of Kansas, but an unknown illness led to his return to his family in Oklahoma Territory, where the Pawnees had been relocated. There, he ably served as an Indian policeman, a deputy sheriff and as a member of the militia.

With the outbreak of the Spanish-American War in 1898, a call came for volunteers for a regiment of Westerners “possessing special qualifications as horsemen and marksmen.” Pollock speedily enlisted. The mustering officer recorded Pollock’s height as 5′ 8″ and his occupation as “artist.”

The 27-year-old artist’s comrades nicknamed him “Pawnee Pollock.” He wasn’t much of a talker, but he was a fighter, distinguishing himself in the battles of Las Guasimas and San Juan Heights. Roosevelt wrote that Pollock was always among those at the front of a charge.

Pollock planned to write a history of the Rough Riders and illustrate it with his own drawings. But the Pawnee warrior died of pneumonia at his Oklahoma home on March 2, 1899, his body weakened by malaria contracted in Cuba. He had just signed a contract to appear with other Rough Riders in Buffalo Bill’s Wild West.

Mark Lee Gardner is the author of Rough Riders: Theodore Roosevelt, His Cowboy Regiment, and the Immortal Charge Up San Juan Hill, due out this May
from William Morrow/HarperCollins.