The Fort Nobody Forgot 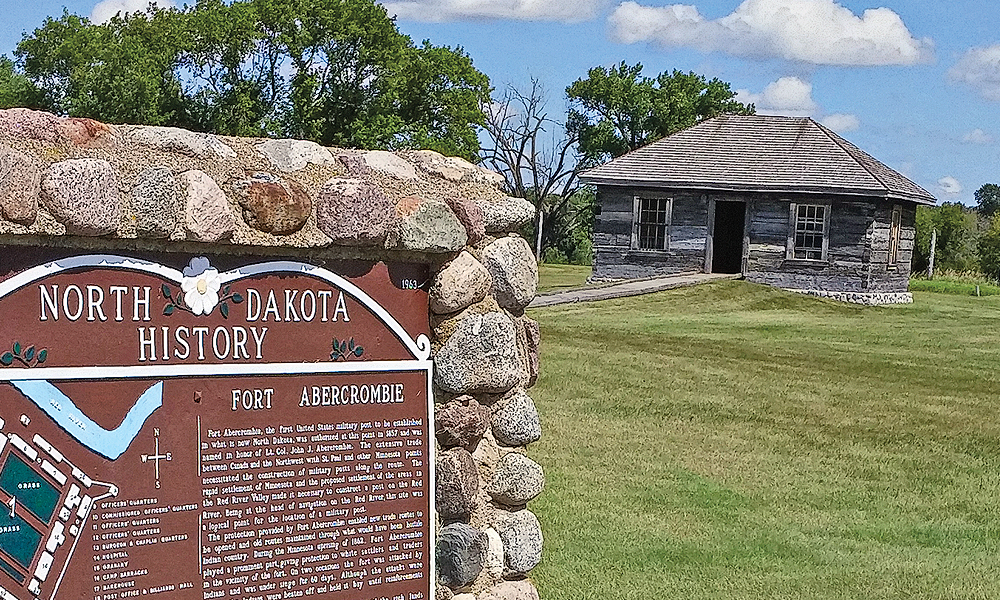 Before Dakota Territory formed on March 2, 1861, the land was home to Fort Abercrombie—the first permanent U.S. military fort in what became North Dakota.

A fort in name only, Fort Abercrombie, built along the Red River in 1858, served as a guard for fur traders traveling the oxcart trails and for traffic from steamboats, stagecoaches and gold-seeking expeditions. German settlers bought farm supplies from the post.

The original fort was not protected by fortifications, but by 28 buildings and some 180 soldiers in a “farm setting” amidst peaceful Dakota tribes, the Wahpetons and Sissetons.

“It was felt that nothing ever happens here,” says Paul Nelson, the fort interpreter.

But something did happen when Fort Abercrombie was attacked three times during Minnesota’s Dakota War of 1862.

For the first attacks, which came on September 3 and 6, Nelson says, “The troops erected earthen breastworks using barrels of pork, corned beef and flour, mingled with earth and cord wood.”

During a quiet spell, soldiers quickly built wooden fortifications that were in place by the time of the third attack on September 26, he says. When the fight was over, four soldiers and one civilian had been killed.

“The Wahpeton and the Sisseton were not involved in the war—they saved white people,” Nelson says. As proof, a nearby town was named Wahpeton in 1869, and one farther south, Sisseton, in 1892.

In 1877, the military abandoned Fort Abercrombie. Its buildings were sold off or carted off (a guardhouse was later brought back to the property). Dakota Territory’s boundaries shrank and, in 1889, became the states of North Dakota and South Dakota.

Nelson says the Wahpeton Rotary Club convinced the Works Project Administration, in 1939, to reconstruct three blockhouses and the stockade. But weather and vandals plagued the site. North Dakota’s state historical society renovated the buildings in the 1950s and built an interpretive center in 2008. Four years later, a National Battlefield grant paid for a site survey.

Today’s visitors may walk the parade ground to see a reclaimed guardhouse, replica buildings and other original buildings “ghosted” by grass footprints. The fort is open year round, while the center is open from May 16 to September 15. The center offers tours—on foot or by golf cart—in which Nelson recites chapter and verse about the fort’s happenings and habits.

“It’s all about the story for me—it’s part of the history of the state,” Nelson says.

Site Supervisor Lenny Krueger agrees: “You can read about it, but when you hear the stories, that’s when life in this fort comes alive.”