Godfrey Gauss and Sam Wortley live behind the Lincoln Courthouse. Gauss lights his pipe and leaves his room, crossing the yard toward the main building. As he walks, he hears a shot, a “tussle upstairs” and “somebody hurrying downstairs, and deputy-sheriff Bell emerging from the door running toward me. He ran right into my arms, expired the same moment, and I laid him down, dead. That I was in a hurry to secure assistance, or perhaps to save myself, everybody will believe.”

Gauss runs around to the east side of the building. He later remembers: “When I arrived at the garden gate leading to the street, in front of the courthouse, I saw the other deputy sheriff, Olinger, coming out of the hotel [The Wortley] opposite, with the other four or five county prisoners where they had taken their dinner. I called to him to come quick. He did so, leaving his prisoners in front of the hotel. When he had come close up to me, and while standing not more than a yard apart, I told him that I was just after laying Bell dead on the ground in the yard behind, and before he could reply, he was struck by a well directed shot fired from a window above us, and fell dead at my feet.

“I ran for my life to reach my room and safety, when Billy the Kid called to me: ‘Don’t run, I wouldn’t hurt you—I am alone, and master not only of the courthouse, but also of the town, for I will allow nobody to come near us. You go,’ he said, ‘and saddle one of Judge Leonard’s horses, and I will clear out as soon as I can have the shackles loosened from my legs.’ With a little prospecting pick I had thrown him through the window, he was working for at least an hour, and could not accomplish more than to free one leg, and he came to the conclusion to wait a better chance, tie one shackle to his waistbelt, and start out. Meanwhile I had saddled a small skittish pony belonging to Billy Burt as there was no other horse available, and had also, by Billy’s command, tied a pair of red blankets behind the saddle. I came near forgetting to say that whilst I was busy saddling, and Mr. Billy Kid trying hard to get his shackles off, my partner, Mr. Sam Wortley, appeared in the door leading from the garden where he had been at work, into the yard, and that when he saw the two sheriffs lying dead he did not know whether to go in or retreat, but on the assurance of Billy the Kid that he would not hurt him, he went in and made generally useful.

“When Billy went downstairs at last, on passing the body of Bell, he said, ‘I’m sorry I had to kill but couldn’t help it.’

“On passing the body of Olinger he gave him a tip with his boot, saying, ‘You are not going to round me up again.’

“We went out together where I had tied up the pony, and he told me to tell the owner of same, Billy Burt, that he would send it back the next day. I, for my part, didn’t much believe in his promise…”

Aligned Against The Kid

One of the leaders of the Irish faction that opposed Tunstall and McSween in the Lincoln County War, Jimmy Dolan and Robert Olinger have their photo taken in Santa Fe, New Mexico Territory, in 1879 by Bennett & Brown. Olinger is killed by the Kid in his escape and is described as being six feet tall, weighing around 240 pounds, having a red complexion and dark eyes. He also answers to “Pecos Bob” and “Big Indian.”

The “House” The Kid Escapes From

The large, two-story building at center, below, and in blowup, is the Murphy-Dolan store, known locally as “The House,” which later did duty as the Lincoln County Courthouse. Bonney was held on the second floor, chained to the floor and guarded by Deputy J.W. Bell and Robert Olinger (Sheriff Garrett was in White Oaks “to meet engagement” and tradition says he was there to buy lumber for the gallows to hang the Kid). Billy turned the tables on Bell when they were returning from the privy (somewhere at bottom right in the blowup). The Kid told Bell not to run, but the deputy ran down the stairs and was shot twice by Bonney and collapsed.

Scene of The Escape

This is the earliest known photo of the Lincoln County Courthouse, taken circa 1887. The nearest upstairs window (behind the men) is the room where Billy was held. This window and the gate at the right end of the fence figured prominently in the events of April 28, 1881.

Slipping The Cuff Off His Small Hand

At six o’clock on the evening of April 28, Deputy Robert Olinger took the five other prisoners across the street to the Wortley Hotel for their dinner. He left his shotgun in Garrett’s office right next to the room the Kid was being held in. With Olinger gone, Billy asked deputy J.W. Bell to take him out back to the privy. On the way back, going up the stairway the Kid slipped off one of his handcuffs. Turning in the narrow space the Kid used the cuff as a weapon, striking Bell across the head. As the deputy stumbled backwards the Kid leapt upon him and wrestled away his pistol. As the stunned Bell turned to flee, the Kid shot him in the back. This is just one version of the killing of Bell. There are other theories; see below.

Where Did Billy Get the Gun? 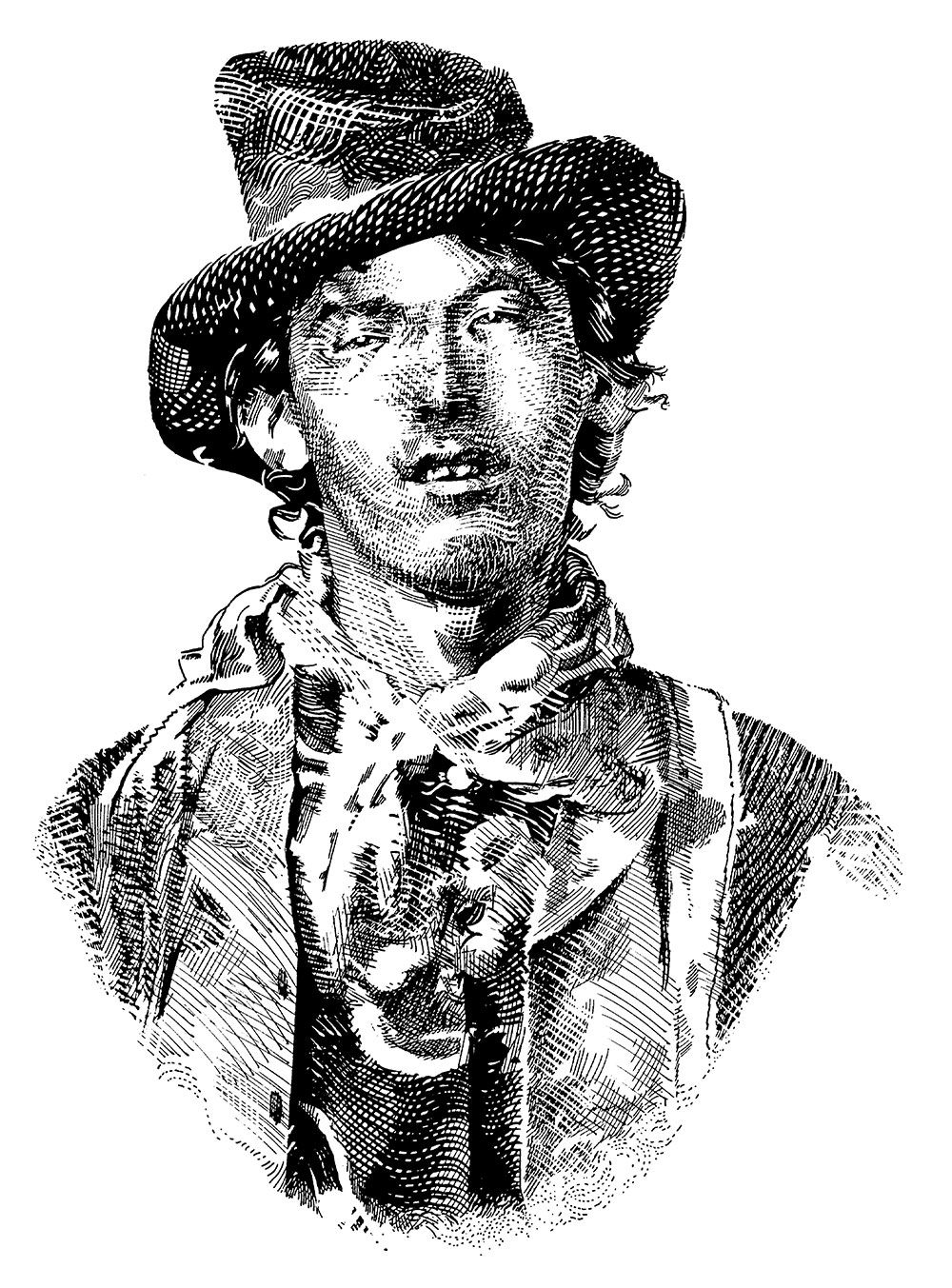 There have been numerous hypotheses as to just how the Kid turned the tables on his guard, James Bell. Some theories may have been encouraged by Billy himself, to protect his friends.

One theory (advanced by Walter Noble Burns) is that during a card game, Billy slipped his hands out of his cuffs and seized Bell’s pistol, and then shot him when he tried to escape. This version was discredited by Judge Lucius Dills, whose investigation revealed that Bell’s pistol was still in its holster, fully loaded, when his body was removed.

Garrett’s theory is that after Bell had taken the Kid downstairs and out back to the privy, the Kid got considerably ahead of his guard on the return. Disappearing up the staircase, Billy leaped up the steps and threw his shoulder into the door of a room where weapons and ammunition were stored. The Kid grabbed a pistol, came back to the head of the stairs and confronted Bell, who was just coming up. When Bell panicked and turned, the Kid fired, realizing the guard would shout for help if he reached the door. Tradition in Lincoln has it that a pistol was planted in the outhouse by a boy, José Aguayo, who was related to the Bacas. The youngster was a “devoted admirer of William Bonney” and simply carried the gun in a newspaper (a common item to carry to an outhouse) and placed it where the Kid could find it. Sam Corbet, who visited the Kid every day, then slipped a piece of paper in the Kid’s hand without being observed by the guards. It bore one word—“privy,” but Billy understood immediately. 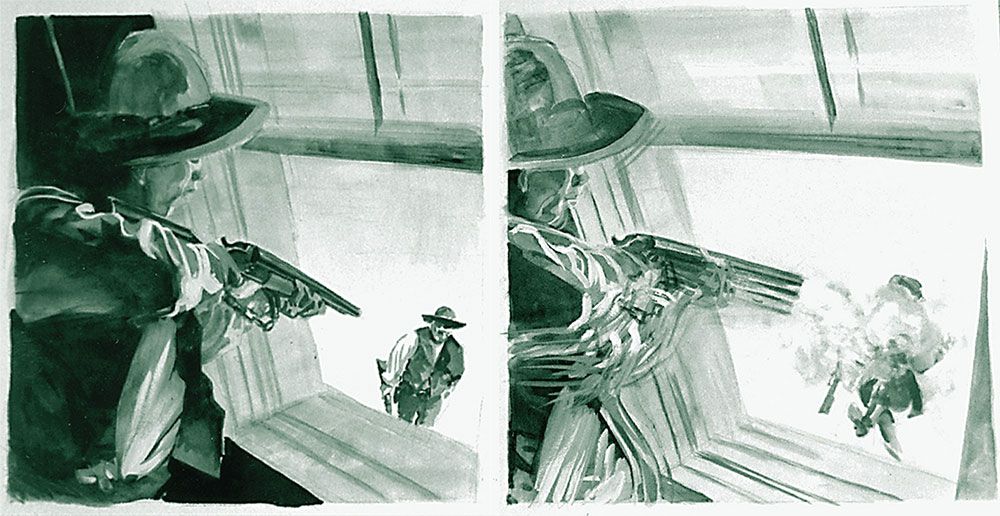 After the killing of Bell, the Kid retrieved Olinger’s shotgun and hobbled to the window, upstairs, to command a view of the Wortley Hotel across the street, where Olinger
had gone to feed the prisoners. When Olinger heard the shot, he came back across the street and entered the gate (see opposite page) and as he approached the building,
the Kid leaned out the window and shot Olinger with his own 10-gauge Whitney
shotgun (above). Tradition says that Kid gave Olinger the cryptic greeting,
“Hello, Bob,” but it is doubtful Billy said anything. 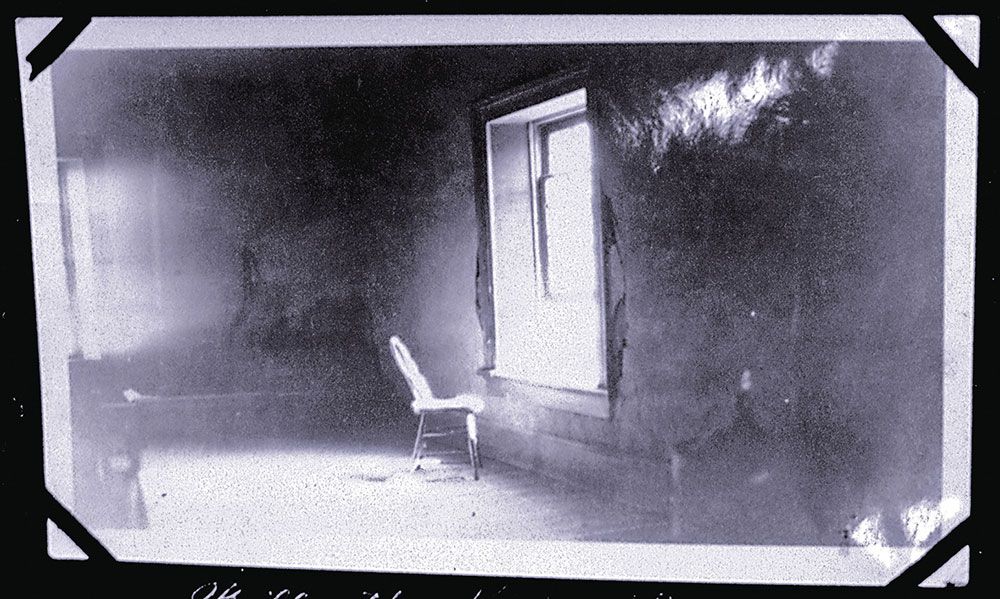 Billy was kept upstairs, shackled to the floor in the northeast room of the house. The sheriff ordered that at least one armed guard was to be with the Kid at all times. A large window lit the room from the east wall. This photo was taken sometime after the turn of the last century. From this window the Kid would be able to see the gallows as they were built. It was a view to a kill, but not the
one Lincoln and all of New Mexico Territory expected. 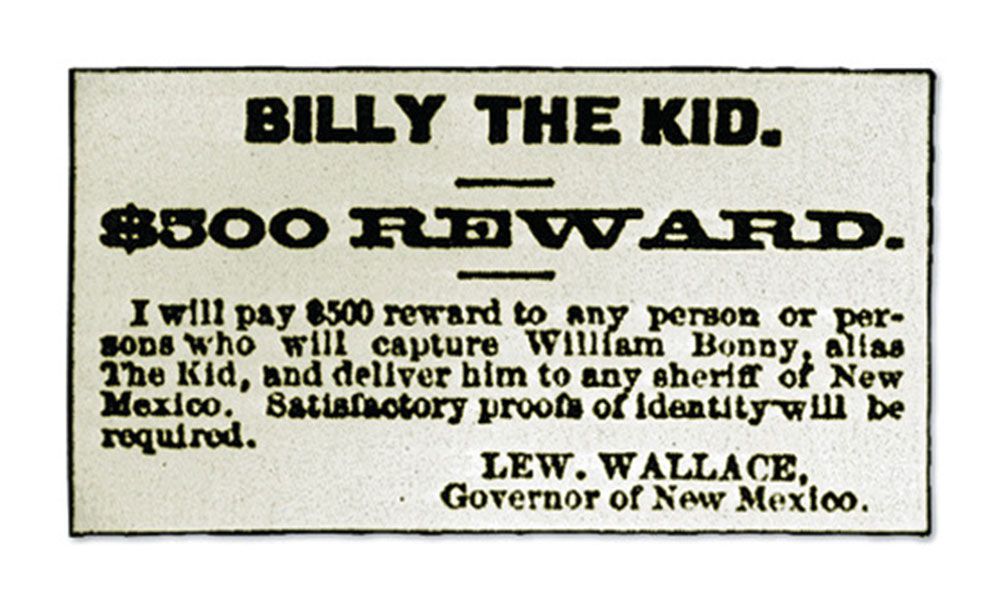 Sheriff Pat Garrett returns to Lincoln from buying lumber for the gallows to be built to hang the Kid and mounts a posse to search for Bonney, but he is unsuccessful.

In Santa Fe, Governor Wallace receives a one-line telegram telling of the escape, and he posts a $500 reward for the Kid’s capture. A month later, Wallace is appointed minister to Turkey and he leaves New Mexico Territory.

A week or so after his escape, Bonney walks into Fort Sumner, steals another horse and hides out at a sheep camp, 35 miles east of Sumner.

Tipped off by Pete Maxwell that the Kid is hiding out around Fort Sumner, Garrett leaves Roswell at night accompanied by John Poe and “Kip” McKinney. They ride all night and stay off the main roads. 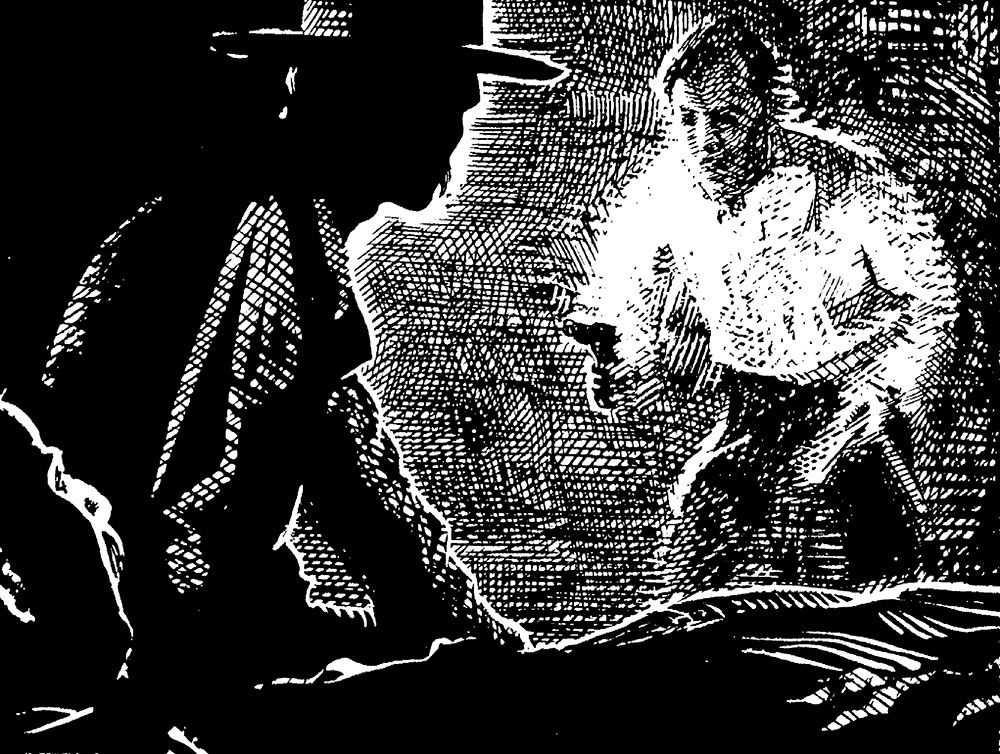 Garrett shoots down the Kid in Pete Maxwell’s bedroom in Fort Sumner, July 14, 1881.

Recommended: The Illustrated Life & Times of Billy the Kid by Bob Boze Bell.