A Fist Full of Double Trouble 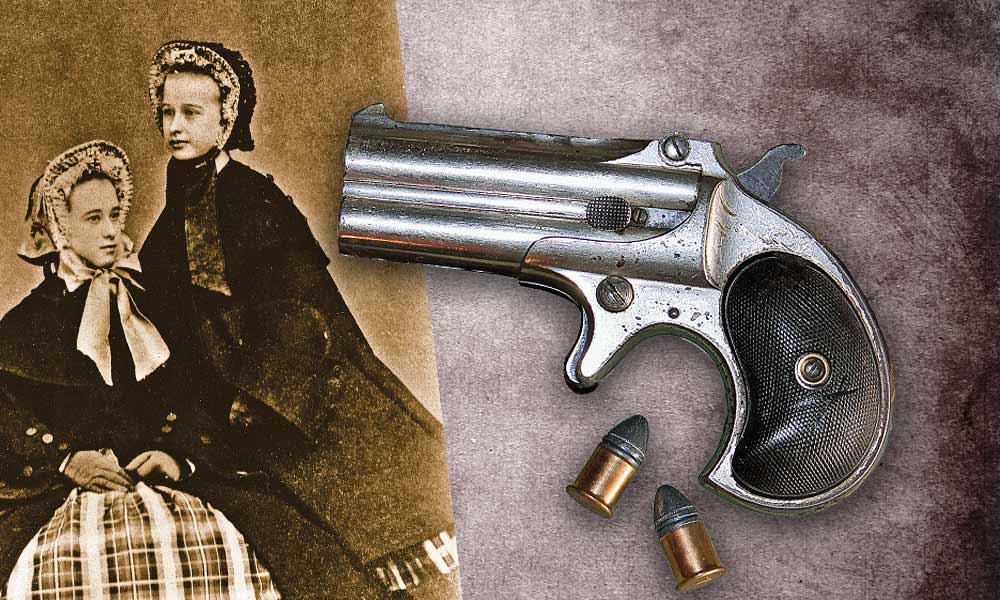 “We pack six-shooters and derringers for fear of the knave,” wrote 1860s Nevada miner and hay rancher George A. Whitney when describing life in the West to his brother. Although frontiersmen of the mid to late 19th century generally favored big, large-caliber revolvers, and often ridiculed the tiny pocket pistols of the day, many carried them in hopes of that extra margin of protection.

While myriad small pocket-sized single- and multi-shot derringers could be found out West, arguably none gained the popularity or lasting fame of Remington’s .41 Rimfire Short, Model 95, better known simply as the Remington Double Derringer or the “Over and Under Derringer.” The brainchild of William H. Elliot, a dentist-turned-gun-inventor who had more than 130 firearms patents granted during the latter half of the 19th century, this celebrated two-shooter was patented on December 12, 1865. The initial production of M95s was stamped “MANUFACTURED BY E. REMINGTON & SONS, ILION N.Y,” along with the stamping “ELLIOT’S PATENT DEC. 12, 1865.”  The first run of fewer than 100 of Elliot’s “Double Repeater,” as the inventor called it, was advertised and sold by Elliot himself in a brief but futile attempt to market his own arms. After that, for the next 69 years, all Model 95s came directly from Remington.

With its simplicity of design and sturdy construction, it’s no wonder that by 1935 an estimated 153,000-plus Over and Under Derringers had been produced. Operation is simple, as the firing pin automatically switches from barrel to barrel upon cocking the hammer, and Remington’s instructions for loading/unloading (printed on the inside box label) read, “Swing the locking lever forward till it is parallel with the barrels; then raise the muzzles till the chambers are sufficiently open for the purpose of pushing out the empty shell and loading; after loading, press the barrels down to the frame and bring the locking lever back to its original position.”

A total of 2,000 of the three-inch barreled derringers were produced before a manual extractor was added to the left side of the barrel assembly. From then on, the gun remained virtually the same, save for some stampings and minor cosmetic changes that did not alter its overall appearance. From 1866 until 1888, the guns were imprinted “E. REMINGTON & SONS, ILION, N.Y.” and production of what collectors call Model No. 1 is estimated at about 16,100 derringers. From 1888 to 1911, around 80,000 Model No. 2s were stamped “REMINGTON ARMS CO., ILION, N.Y.,” and around 55,000 Model No. 3 pistols were turned out between 1912 and 1935. These later models were marked “REMINGTON ARMS-U.M.C. CO., ILION, N.Y.,” although there are slight variations in the use of the UMC (Union Metallic Cartridge, which had merged with Remington in 1912) stamping found on some of these pistols. Finally, from around 1930 through the end of production, approximately 500 Model 4s were produced.

Through most of the Model 95s’ production, guns were finished either in blued, nickel or a combination of both; the Model 4 wore a matte-type blue-gray coating. Grips are generally walnut, rosewood or checkered hard rubber, although pearl and ivory were also available. Serial numbers can be confusing since they are sometimes in sequence, but most are in batches. The Remington serial numbering system is often erratic.

Whether secretly carried by a 19th-century gambler, a lawman, hidden in the petticoats of a soiled dove, or seen on the silver screen being brandished by John Wayne in films like Big Jake or The Shootist, and Richard Boone in TV’s 1950s classic Have Gun—Will Travel, Remington’s Model 95 has become the classic derringer of the Old West.