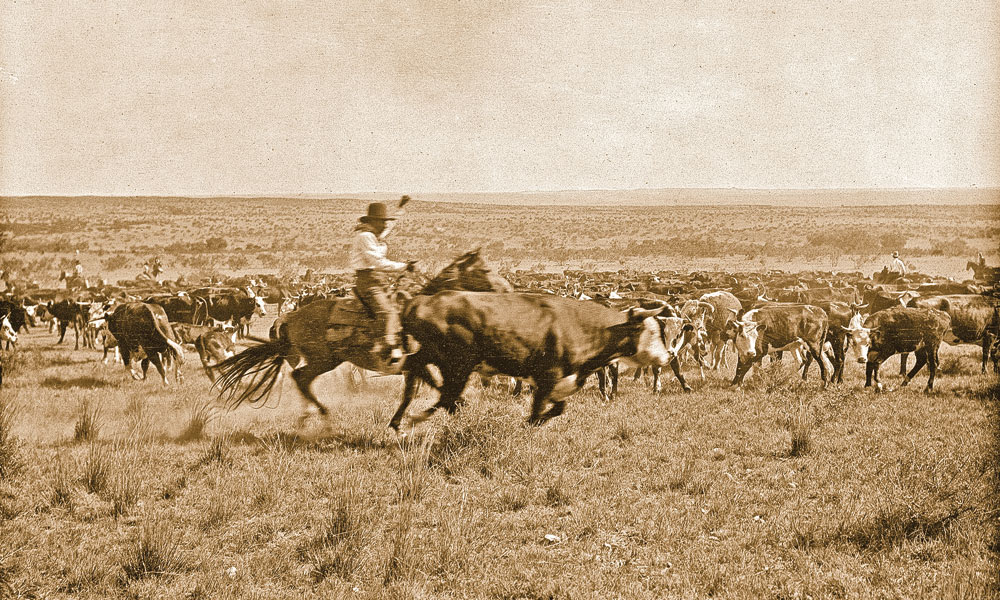 Texas. Just the name alone evokes imagery of a wild and untamed bygone era when anything was possible. I am biased when I speak on the subject of Texas. It is my home and I am a proud Texan, through and through. There is nothing I love more than driving the dusty byroads and exploring the deep roots of my home state’s history—such as its role in the birth of the cattle industry. The livestock boom began in Texas following the conclusion of the Civil War.

The Alamo City, San Antonio, was the center of commerce for the region in the postbellum era. Before the prevalence of the railroad, cattle drives were how beeves got from ranches to dinner tables. A half-Scot, half-Cherokee scout named Jesse Chisholm laid the foundation for what would be the Chisholm Trail in San Antonio in 1867. It would remain open only until 1884, but its place in history is sacrosanct.

In San Antonio, if you want to explore the area’s ranching heritage and history, there is no better place to start than at the South Texas Heritage Center on the grounds of the Witte Museum. A short drive from downtown, or a 20- to 30-minute walk along the Museum Reach of the San Antonio Riverwalk, the center is 20,000 square feet of the story of Texas told through a variety of hands-on and interactive exhibits. It is still relatively new, having opened in 2012, and you cannot find a more beautiful spot in the city than the grounds of the Witte.

After visiting the Riverwalk and the Witte Museum, visitors to San Antonio will quickly discover it is a city rich in history that will require more than one trip to visit the Alamo, its sister missions (now UNESCO World Heritage sites), the Briscoe Western Art Museum and the fabled Hall of Horns at the Buckhorn Saloon, or being swept away by the stories of four historic hotels in the downtown area: The Emily Morgan, The Menger, The Crockett or the Guenther.

The I-35 corridor from San Antonio north to Austin, Waco and Fort Worth is the metaphorical spine of the Lone Star State. Visitors could spend weeks in each city and still not see everything. However, if you’re looking for history, each has a few must-see highlights.

In the capital city of Austin, the Bob Bullock Texas History Museum is one that is not to be missed. This three-story museum is dedicated to telling the entire history of the Lone Star State.

Up the road about 45 minutes in Waco is the Texas Ranger Hall of Fame and Museum. Dedicated to telling the whole story of Texas’s most legendary law enforcement agency, the museum is home to priceless artifacts from some of the Rangers’ most famous cases.

Fort Worth is where the West truly comes alive. This sprawling century-old complex is home to the Texas Cowboy Hall of Fame and the Stockyards Exchange Museum. There are two daily cattle drives with real Texas longhorns and real Texas cowboys. There are also working stagecoach rides and a steam engine train. But to understand the scope of the Chisholm Trail you have to return to San Antonio and travel north and a wee bit west. The first stop on your trip should be Bandera. Heading up along Highway 16, nestled deep in the Texas Hill Country, is the Cowboy Capital of the World.

The sparkling Medina River ribbons the town, which made it a desired stop along the Chisholm Trail. Steeped in history, Bandera should be seen with a first stop at the Frontier Times Museum just off the main town square. Western art, historical curiosities—including a 2,000-year-old corncob—and a Hall of Texas Heroes are just some of the highlights of this quirky museum.

The Hill Country is steeped in Texas history, and Kerrville,
the next stop on the Chisholm Trail and just north of Bandera on Highway 16, has history ingrained in every facet of the town. Founded by James Kerr, a major in the Texan army during the war for Texas Independence, Kerrville has come to embody the spirit of the Old West. It is the home of the Museum of Western Art, and its collection includes approximately 150 sculptures, 250 paintings and numerous artifacts.

The Chisholm Trail ran across Texas the way veins run through a body. Following its course north and east takes you to the historic German town of Fredericksburg, the de facto capital of Texas Hill Country. However, to get the history and feel for Fredericksburg, you need to venture away from the quaint shops and bistros of Main Street. Nestled along the banks of Baron’s Creek is historic Fort Martin Scott. Founded in 1848, the site was used by the U.S. Army, Confederate Army and the Texas Rangers. The grounds of the fort are also home to the recently opened Texas Rangers Heritage Center. The fort offers living history demonstrations and the center has a number of events offering up the history and lore of the Rangers.

While you’re in the area, you really should make an effort to head north again up on
FM (farm-to-market road) 965 to visit Enchanted Rock State Natural Area. It is the site of one of the most famous engagements in Texas Rangers history. If you have time to hike to the summit, you can read the full story of how Ranger John Coffee Hays used the natural rock formations as cover as he held off an Indian raiding party for
three hours until help arrived.

Just 17 miles north of Fredericksburg, Enchanted Rock is part of Llano County, so when you’ve finished your afternoon excursion, follow the trail on into the county seat of Llano. Each weekend in October, downtown Llano transforms itself for the annual Wild West Weekend. The weekend features live music and a street dance, author readings, an Outlaw Escape & Chase and a Chuck Wagon Cook-Off.

After Hill Country, the trail takes you into the wide-open spaces of West Texas. You will drive for miles and miles without encountering anything, really. It is in many ways the last vestige of the Old West. On your journey west, you will come to San Angelo and Abilene. San Angelo is known as Texas’s biggest small town.  It is the home of Fort Concho National Historic Landmark, one of West Texas’s most important historic frontier outposts.

The 1,600-acre park is especially significant as it was the home at one point in time or another to the 9th, 10th, 24th and 25th U.S. Cavalry units, better known as the Buffalo Soldiers. Re-enactors and museum tours figuratively transport visitors back in time, which makes it the place to visit in San Angelo for history enthusiasts.

From San Angelo, the trail forks east to Abilene, named after the more well-known cow town in Kansas. What it may lack in notoriety, Abilene more than makes up for in history. Frontier Texas! is a technological marvel. This interactive museum tells the story of the state’s Western heritage in a unique, hands-on way.

Heading back west leads you to Lubbock, gateway to the Texas Panhandle. Founded in 1876 by former Texas Ranger Thomas Lubbock, the city is a comfortable hybrid of an industrialized commercial hub (the energy business is big in this part of the world) and a college town. Texas Tech University fully embraces its cowboy legacy and lineage, and the campus is home to the National Ranching Heritage Center. Nearly 50 authentic ranch buildings from the 17th through the 20th centuries have been meticulously moved from their original sites to this open-air museum complex.

Highway 27 north will lead you into the panhandle region of Texas and the last stops on the trail. South of Amarillo is the city of Canyon and its namesake, Palo Duro Canyon State Park. The second-largest canyon in the United States is also one of the state’s historic treasures.

Long-revered by the Comanche and Kiowa people, the canyon holds the distinction of being the site of the 1874 battle between the U.S. Army and famed Comanche chief Quanah Parker in 1874. The canyon is truly awe-inspiring, and during the summer, its walls are the backdrop for the long-running historical musical drama Texas!

Amarillo, the last stop on the Chisholm Trail, must not be missed by history fans. Before taking in any of the sites, such as the Panhandle-Plains History Museum in neighboring Canyon, the Kwahadi Museum of the American Indian, or the American Quarter Horse Hall of Fame and Museum, celebrate the end of your heritage tour at the Big Texan Steak Ranch, home of the 72-ounce steak challenge! The Big Texan is the unofficial welcome center of Amarillo and diners there will get the full Texas experience.