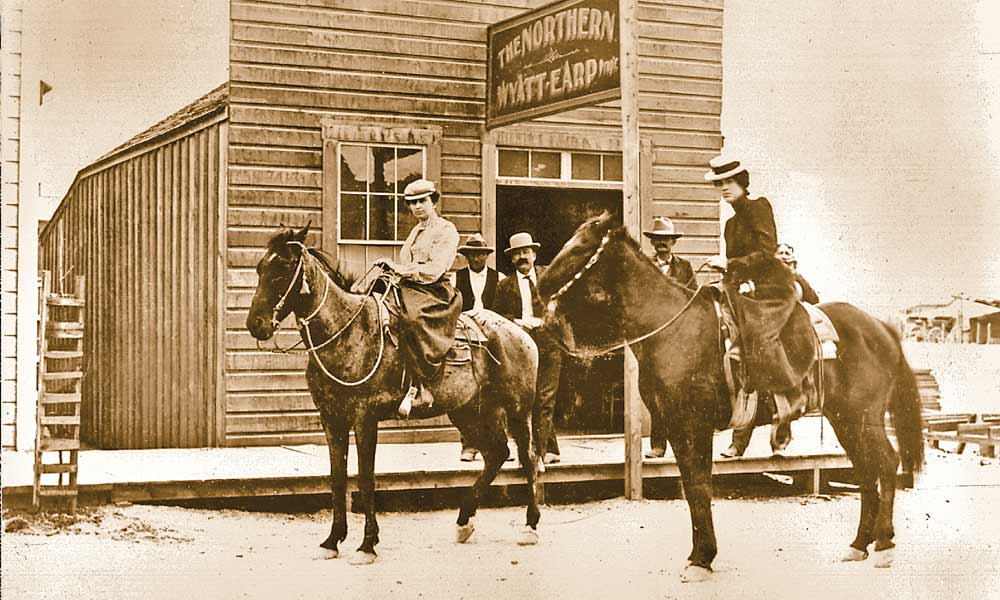 Ever so brave, courageous and bold (isn’t that redundant?), I’ve let myself be talked into tracking down Wyatt Earp’s missing years.

Face it. Wyatt Earp has been done to death. We know all about those Kansas and Arizona days. I’ve even spent time in San Diego, where Wyatt and his brother, Virgil, lived off and on between 1885 and 1890.

Folks have studied his controversial decision in a San Francisco boxing match, and old Wyatt is buried in nearby Colma.

Heck, I’ve even toured the Earp house in Pella, Iowa, where Wyatt grew up in the 1850s.

So here I am, driving to Tonopah, Nevada, wishing that my editors had sent me to Nome, Alaska.

The best place to begin is Carson City. Mainly because it’s cooler. Get your prep work done at Nevada State Museum, and maybe hit a casino to bet on some boxing.

After all, that tilt in San Francisco wasn’t Wyatt Earp’s only trip ringside.

In 1897, Wyatt and Bat Masterson came to Carson City, allegedly to work security, for the Gentleman Jim Corbett versus Bob Fitzsimmons fight. Back then, Nevada—which soon would become famous for legalizing gambling, prostitution and quickie divorces—had legalized boxing. The “Fight of the Century” on March 17 drew 6,000 spectators and even a filmmaker (Enchor Rector, one of Thomas Edison’s ex-partners, whose widescreen documentary—fragments of which survive—would earn an estimated $750,000 worldwide). Fitzsimmons, by the way, won with a 14th-round TKO.

Eventually, you’ll have to sweat—but not in a boxing ring.

In early 1902, Wyatt, not yet 54 years old, arrived from Alaska to thaw out in this bleak desert. He came to Tonopah, while Virgil settled in nearby Goldfield two years later.

“Virgil was a desert rat,” said Virgil’s wife, Allie. “I was just a desert mouse.”

The Tonopah Historic Mining Park preserves the history with original buildings, exhibits and more, and allows self-guided tours offering a glimpse at what life was like when Wyatt was maybe bellying up to his bar, which was run by friend Al Martin.

In Goldfield, roughly 26 miles south of  Tonopah, Virgil set up shop as a bouncer at the National Club. The Tonopah Sun called Virgil “a mild looking individual.”

The paper also called the Earps “the famous family of gunologists.” Gunologists? So why hasn’t that name become vogue?

By 1903, Martin and Wyatt had moved the Northern Saloon to Goldfield, but their partnership ended in 1905, and the saloon, contents and all, were sold. The saloon’s bar likely made it to Rhyolite’s Monaco Saloon.

Goldfield, which started as a tent city with 20 hardy miners in 1902, had by 1907 become Nevada’s then-largest city (population 20,000) and would produce more than $83 million in gold between 1903 and 1940. Although much of the town was destroyed in a 1923 fire, it’s worth visiting, thanks to the Goldfield Historical Society, which preserves the town’s history.

Unfortunately for Virgil, a pneumonia epidemic swept through Goldfield during the fall of 1905. Allie gave him a cigar, put a letter from his grandniece under his pillow, and held his hand until he died on October 19. He was 61.

On the way to Death Valley, head to the ghost town of Rhyolite. You won’t find the Monaco Saloon or Wyatt’s old bar—it had moved on by 1910—but there are ruins of some walls and a few complete buildings.

In the spring of 1905, Wyatt discovered what he thought would be productive mines along the Arizona-California border. Near Parker, Arizona, he set up his “Happy Day” mines.

And you think Tonopah is rough country?

Parker draws more snowbirds than Western history buffs, but the Colorado River Indian Tribes Museum and Library and Parker Area Historical Museum are both worth a look.

Adventurous people can tool around the old mines and camps west of Parker near Earp, California, but this is for a hardy lot. These mines might not be remembered like Tombstone’s, but they did play an important part in old Wyatt’s legacy.

The Parker mining venture brought Wyatt to Los Angeles, where he met John H. Flood Jr. Wyatt wanted Flood, an engineer, to locate more mines in the Mojave. Flood took a strong liking to Wyatt and became his personal secretary—not that he ever got paid.

Yes, but Flood’s manuscript would help Wyatt connect with William S. Hart, the legendary star of Hollywood Westerns  (his Hell’s Hinges and Tumbleweeds are among Silent Era’s great Westerns). Wyatt often hung out with Hart and Tom Mix while Hart tried to get the Flood manuscript published, but publishers weren’t interested. Yet.

After Hart’s retirement from acting, he commissioned a mansion built outside of Newhall. Today, it’s the William S. Hart Park and Museum and definitely worthy of a visit. The home, open for guided tours only, showcases an amazing collection of artwork by masters such as Charles M. Russell and Frederic Remington. The museum also has a fascinating collection of Hart’s mementos and Indian artifacts.

So Wyatt and Josie spent their summers in Los Angeles, hobnobbing with the Hollywood set—and gambling, of course. When the desert cooled off a bit, they would head east into the Mojave to prospect along the Colorado River: Parker, Vanderbilt, Oatman, Goldroad, Chloride, Searchlight, White Hills, Vidal. Wyatt might have even hit Needles to gamble with soldiers—likely the only reason anyone would ever stop in Needles. In 1930, after Wyatt’s death, a post office was established near one of his mining camps, and the town (loosely speaking) was named Earp, California.

In 1926, book publishers began taking much more interest in Western legends because of Walter Noble Burns’s best-selling The Saga of Billy the Kid.

Burns wanted to tackle Wyatt’s story, but stubborn, loyal Wyatt still pinned his hopes on Flood. Burns wrote a book anyway, and his Tombstone: An Iliad of the Southwest became another best-seller.

Wyatt’s story would reach best-seller status when Stuart Lake’s Wyatt Earp: Frontier Marshal hit the shelves in 1931, but the old lawman wouldn’t live to see it.

Johnny D. Boggs has avoided tackling an O.K. Corral novel to keep Earpophiles off his back.