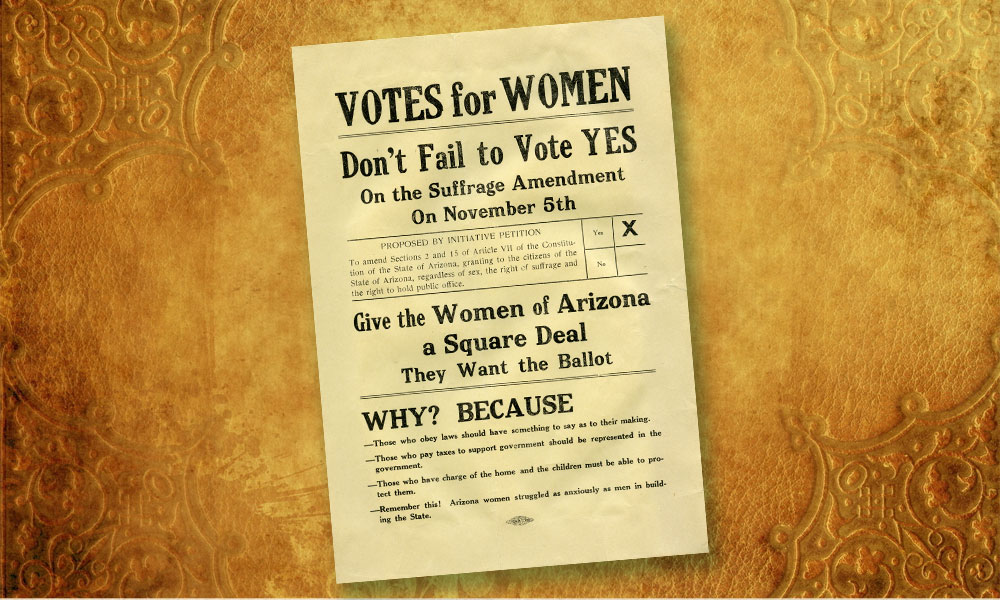 The women of Arizona Territory spent a quarter-century seeking the right to vote in all elections. They’d been given the vote in school elections in 1883, and at one point, it looked like that would be expanded to municipal elections—but that bill was thrown out by the courts. When it came time to write a constitution for statehood, women thought they’d be included, but no, it wasn’t to be. It wasn’t until November 5, 1912, in the first election after statehood, that women got their reward. “Give the women of Arizona a Square Deal. They want the ballot,” read the campaign poster that was distributed throughout the 48th state that entered the union on Feb. 14, 1912. And then the poster asked “Why? Because…” and listed these reasons:

“–Those who obey laws should have something to say as to their making.

“–Those who pay taxes to support government should be represented in the government.

“–Those who have charge of the home and the children must be able to protect them.

“–Remember This! Arizona women struggled as anxiously as men in building the State.”

The arguments were so convincing, every state newspaper was on board, all the political parties supported it and every Arizona county passed it, sometimes four to one. The vote was 13,452 to 6,202—the largest approval rate of any state in the nation. The Governor signed the election results to make suffrage the law of Arizona on December 5.