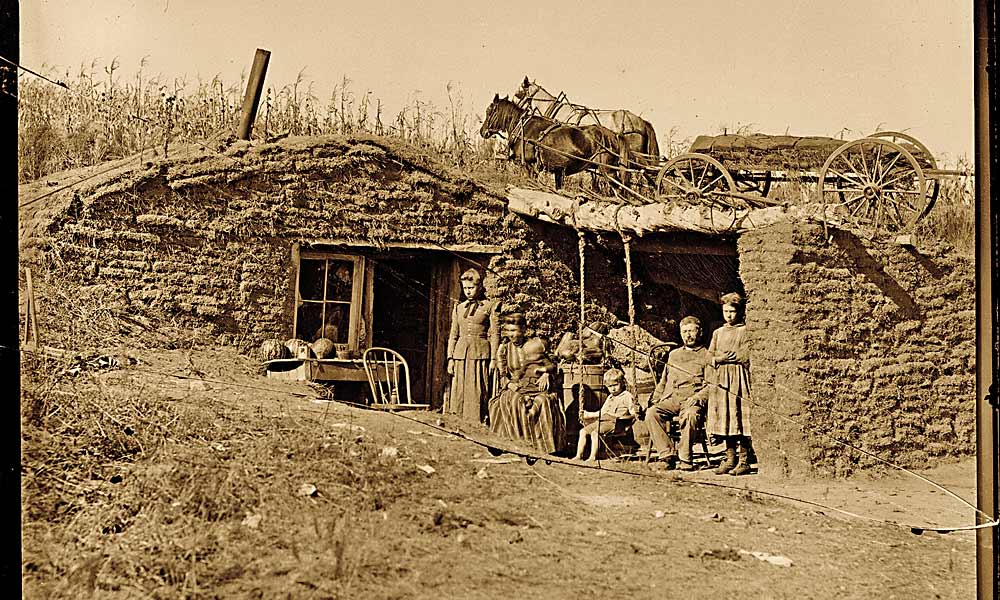 Nebraska, known by the slogan, “Where the West Begins,” is an Otoe Indian word meaning flat water, which referred to the Platte River. Even before Lewis and Clark explored the state’s eastern boundary along the Missouri River, French and Spanish fur traders came in the 1790s. Virginian Joshua Pilcher of the Missouri Fur Company, established his post for trading with local Indian tribes in 1822 at present-day Bellevue. The post was later sold to Lucien Fontenelle.

Not only was the Platte River important as a water source, in the 1820s it guided Indians and then later, supply caravans, to the annual trappers’ rendezvous in Western Wyoming. Twenty years later, wagon trains of settlers left Independence, Missouri, to seek land in Oregon and California. Leaving Missouri, their route went through northeast Kansas and into Nebraska to hook up with the “Great Platte River Road,” forming the Oregon and California trails.In 1846, Mormons began an exodus from Nauvoo, Illinois, to find a place in the West to govern themselves. They halted at Winter Quarters (Omaha), and in the spring continued their trek using the north side of the Platte River to avoid clashes with anti-Mormons.

When gold was discovered in California in 1848, a mass movement of Easterners seeking their fortune stampeded down both sides of the Platte. Soon, as the grass was eaten away, the road became strewn with starving and dead oxen, wagons and every other possession one could imagine.

Our tour begins at Rock Creek Station. This was the immigrants’ first stop in Nebraska after leaving Independence. The 1857 station served stage lines, freighters, the Pony Express and travelers on the Oregon Trail. It was here, on July 12, 1861, that stable-hand James Butler Hickok killed his first man. Three men were killed as a result of a dispute over unpaid bills of Russell, Majors and Waddel, owners of the Overland Stage Company and founders of the Pony Express.

From Jansen, drive east on Nebraska 136 to Beatrice where you’ll catch Nebraska Highway 4 to Homestead National Monument of America. The Homestead Act was one of three passed in 1862 that served to encourage settlement of the West. The park includes Daniel Freeman’s claim, believed to be the first homestead claim in the nation. Visit the Heritage and Education centers, Freeman’s grave, an 1867 log cabin and the one-room Freeman School, the longest-operating one-room school in Nebraska, open from 1872 until 1967.

Next, take a slight detour about four miles northwest of Kenesaw (northwest of Hastings) to the grave of emigrant Susan Haile, who died in 1852 on the Oregon Trail. Signs are in place to guide you and the grave is marked.

Proceed 20 miles north from Hastings on U.S. 281 where you’ll find the Stuhr Museum of the Prairie Pioneer on the southern edge of Grand Island. The gem of this living history museum is the sixty-building 1890s “Railroad Town,” which includes actor Henry Fonda’s birth home, a log cabin settlement and many other structures. You can also tour a reconstructed Pawnee earth lodge.

Continue the journey from Cairo, northwest of Grand Island, north on Nebraska 11, along the beautiful Loup Rivers Scenic Byway to Elyria. Watch for signs to Fort Hartsuff State Historical Park. The fort was established in 1874 to protect settlers and the friendly Pawnees from the Sioux. An infantry company of around 55 men usually garrisoned the fort, which operated until 1881. All nine major buildings were made of lime/concrete and have been fully restored. Fort Hartsuff is Nebraska’s best-kept secret. It has one of only two functioning 1870s army bakeries and the only 1870s hospital. Fully attired members of the Grand Army of the Frontier often “man” the fort and conduct periodic musters.

Head north to Burwell, and west on Nebraska 91 to 2 and continue west on the Sandhills Journey Scenic Byway to Ellsworth. North on 27 is the Mari Sandoz Historical Marker. The author, renowned for her depiction of pioneer life and plains Indians, is buried here. Continue north to Gordon and then west to Chadron.

Three miles east of Chadron, you will find the Museum of the Fur Trade. This amazing museum houses the most comprehensive collection of the era’s trade goods, clothing and textiles in existence. Among the various goods displayed is the largest collection of trade guns, including a pre-1650 Dutch piece, and the personal firearms of John Kinzie, Kit Carson, Tecumseh and Young Man Afraid of His Horses. Just behind the museum is the 1837 James Bordeaux trading post, reconstructed on the original foundation stones. Being listed on the National Register of Historic Places is a rare honor for a reconstruction.

Continue on to the Chadron State College campus where you’ll find the Mari Sandoz High Plains Heritage Center. It serves as the research center and repository of Sandoz’s artifacts, books, photographs and manuscripts, many of which are on display. The C.F. Coffee Gallery tells the history of cattle ranching in the region.

Schedule plenty of time to visit Fort Robinson State Park west of Crawford. Many of the restored structures, built from 1874 to 1909, are available for lodging. A marker near the reconstructed 1874 buildings shows where Crazy Horse was killed. Only 1.5 miles from the fort is the Red Cloud Agency site and the World War II German POW camp site. A wide array of activities offered include trail rides, swimming, cookouts, camping and even a post playhouse.

From Chadron take Nebraska 385 south to 26, and on to Ogallala. This booming cattle town on the Texas (Western) Trail had a history of violence and its own Boot Hill, where at least 48 burials were made. A larger-than-life-sized bronze statue titled The Trail Boss, sits prominently on Boot Hill. Also stop by the interesting Front Street Museum that features food and entertainment.

Continue your journey east on I-80 to North Platte. Buffalo Bill Cody’s Scout’s Rest Ranch is located on the north end of Buffalo Bill Avenue. The 1886 Victorian home has been restored and features period furnishings and many of Cody’s belongings. Displayed inside the original 148’ x 70’ horse barn are original Wild West show posters, photos, carriages and tack.

The Lincoln County Historical Museum is only one block south and features artifacts from Fort McPherson and the World War II North Platte Canteen exhibit. Behind the museum is a Western prairie village that includes original Fort McPherson and Pony Express cabins, along with blacksmith shop, railroad depot, church and others.

On the way east to Cozad, be sure to stop in Gothenburg to see an original Pony Express station in the town’s Ehman Park. A second station is just south of town on the original ranch site.

At Cozad you’ll find the Robert Henri Museum. Robert, son of faro dealer and town founder John Cozad, changed his name to Henri when his father shot and killed a man and the family fled town. Robert was named in 1929 as one of the top three living American artists and is highly celebrated today. The museum, housed in the family’s 1870s hotel, features many pieces of Henri’s artwork.

Next door is the 100th Meridian Museum, an eclectic collection that tells the story of early settlers to contemporary life. The original Concord touring coach that President Taft used to tour Yellowstone Park is on display. Both museums are located on the historic Lincoln Highway in downtown Cozad.

Continue east on I-80 to Kearney, exit south and follow signs to Fort Kearny State Historical Park. Fort Kearny (1848-1871) was established to protect and supply travelers on the Oregon Trail. Home of the first Pawnee Scouts, the 1st Nebraska
and 7th Iowa Cavalry, it was a supply depot for Indian campaigns. The fort also served as stage and Pony Express station. Visit the interpretive center, reconstructed blacksmith shop and stockade. RV and tent camping is available one mile from the fort.

In completing your tour of Nebraska, don’t miss the Great Platte River Road Archway that spans I-80 just east of Kearney. The Archway is an amazing experience, a monument to 170 years of transportation history and Nebraska’s role in westward expansion.

Monty McCord is the award-winning author of Mundy’s Law. He writes about lawmen and outlaws from the Old West to the mid-twentieth century. He lives in Nebraska.