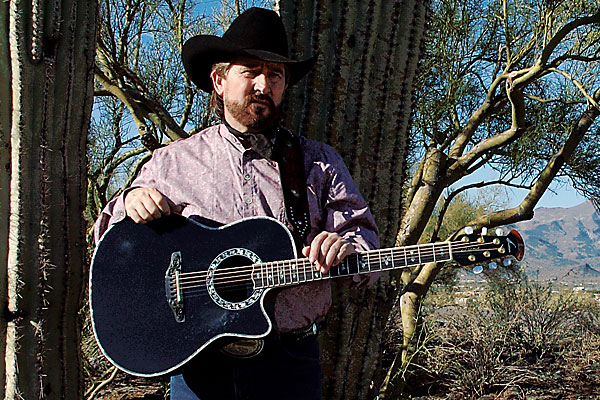 Being an outlaw is no way to win a popularity contest. Nashville tends to shun Kimes because he bucked the system. Some in the Western music genre think he’s a sell-out because of his close association with Garth Brooks.

Stories circulate of artists who won’t appear on the same bill or CD compilation with Kimes. His take on it: “It gives me drive. Besides, I don’t hold truck with some of them, either.”

“Men that wouldn’t bend.” That’s what old-timers in western Arkansas and eastern Oklahoma say about the Kimes family. Just look at Matt and George Kimes, who fought the Great Depression the only way they knew how—robbing banks and stores, sometimes with Ma Barker and her boys. The law caught up with them and put the Kimes brothers in prison for a time, but they never changed their ways. Same was true for several of their kin, some of whom also rode the outlaw trail.

One of their modern-day relatives, Royal Wade Kimes, has got more than a little of that renegade spirit in him. And he’s finding sweet success in molding a music career based on an unbending vision and determination.

It’s sort of a classic story—kid grows up on a ranch in Arkansas, learns how to handle cattle and horses, and gets familiar with guns and hard work. But he also loves music, Country and Western music, and he starts writing songs by the age of 14. He has to keep day jobs while he hones his craft—cowboy, sawmill operator, that sort of thing. And then, one day, he’s “discovered.”

Country legend Eddy Arnold “found” Wade Kimes and his music talents during a chance meeting in Nashville in the 1980s.  The star helped the greenhorn get his foot in the door as a songwriter—and sharpen his craft as a singer, too.

Kimes tried to do it “their way.” He worked within the Nashville music industry, looking to make a buck and get some recognition. He cranked out the songs—and some of them became hits for other folks, the biggest being “We Bury the Hatchet,” a tune he wrote with Garth Brooks that appeared on Brooks’ 1991 multi-million seller Ropin’ the Wind. The song made for a big payday for the guy from Arkansas.

By 1996, Kimes got his big break. Warner/Asylum Records signed him up as a singer-songwriter, and he came up with his first album, Another Man’s Sky. The company promised they’d push it to the hilt … and then changed their minds, throwing their marketing weight behind a more established act. Kimes’ record actually spawned a couple of radio hits, but it didn’t do nearly as well as intended. Betrayed and disillusioned, he headed back to Arkansas.

Wade will tell you that he went through a dark period before getting his bearings back. He couldn’t trust the system, but he did have faith in God and himself. So he’d work outside of the industry, in spite of it. He’d be an outlaw; he’d be a man that wouldn’t bend. “I’m just a cowboy; all I want to do is ride my horse and sing songs,” he says. “But I found that I had to get off the horse and get to work if I was goin’ to get where I wanted to go.”

So Wade got out of his contract with Warner/Asylum and started up his own Wonderment Records. He put together a second album, Hangin’ Around the Moon, filled his truck with CDs and headed toward Wyoming. By the time his road trip was done a few weeks later, he’d sold every copy. And some important folks—like Garth Brooks—sat up and took notice.

The record companies came calling again, offering him the moon and stars, and a comet or two. But Kimes wasn’t about to go there again. He was edging away from the Nashville sound, becoming more of a Western artist. And it was paying off.

He cut four more albums—the latest is 2006’s Strikin’ Matches—all well received by critics and buyers. He became a bigger concert draw. He won two Academy of Western Artists’ Will Rogers Awards. He got his own fan club, the Loyal Royals. He even talked his pal Garth Brooks into cutting a song with him (“Night Birds” in the 2002 album, A Dyin’ Breed).

But one of the problems with success —especially do-it-yourself success—is that you tend to want to do more and more. Wade Kimes is a case in point. Just check out this list:

• He’s already produced a rock album by his lead guitarist, Larry Crowley (due out just about now), and he’s got two or three other acts he wants to produce.

• He owns a couple of music publishing companies.

• His first novel, Eminent Domain and Old Man Smith (self-published, of course), came out last summer, and he’s got a few more books in the works.

• He owns a jewelry company and helps design some of its wares.

• A few years back, he discovered he had some artistic talent—his paintings now sell for good bucks in various galleries.

• He’s always on the lookout for good horses and plans to get into horse breeding in the future.

• He’s the spokesperson for the National Day of the Cowboy, a nonprofit organization working to get Congress to make the day a national holiday.

• He endorses products from Ovation Guitars to Taylor & Company firearms.

• He’s become a well-known advocate for the right to bear arms (his band is called the Packin’ Iron Posse; on occasion they go heeled onstage).

• He sometimes gives presentations to other independent artists about how they can follow in his footsteps.

• He just bought a mountain in western Arkansas—not so coincidentally, it’s called Kimes Mountain. He plans to sell his place outside Nashville and build a home on the mountain (undoubtedly, he’ll design it himself and oversee its construction).

Now all of that brings up the “R” idiom: Renaissance Man.

Ask Wade about that and he sounds both awestruck and uncomfortable. “I used to ask myself, ‘Don’t other people do all this?’ I just do it; I don’t really think about it.”

Of course, it helps that Wade has got good people helping out—and that he can get by with just a couple of hours of sleep per night.

Yet when you’ve got a vision, there aren’t enough hours in the day to get everything done. Wade has a vision about the music business: “Everybody is sittin’ on idle—Country, Rock, Pop music. But there’s going to be an explosion, and Western music is going to be right there.” Even The Economist thinks Kimes is primed for something unique in the field, after including him in its piece on the Country Western market in the U.S. this past December.

Kimes is planning for that explosion, of course. He says that Western music artists will need to spend more time and money on production and marketing. They’ll have to get better media coverage of things like awards shows. They must become expert at using the Internet to get their music out. And Western songwriters and musicians and producers—everyone in the field, really—have to come together as a unified force. One thing is for sure: Kimes will be leading and pulling folks along that path.

There’s an irony in Kimes’ success. The all-powerful music industry that once stiffed him—and that he wouldn’t bend to—isn’t so powerful anymore. Artists can record and produce music with computer programs. They can design their own cover artwork, distribute and market their own materials on the Internet, and they get to keep more of the profits that used to go to the corporations. Record companies are trying to emulate some of those strategies to keep their heads above water.

They’re coming around to Royal Wade Kimes’ way of doing things. “It’s fast becoming the independents’ world,” says Wade, chuckling. “Just the way it used to be back in the ’50s.”

So it’s no wonder Wade is feeling good about things. “I’m having fun for the first time. I don’t worry about waking up and gettin’ my legs knocked out from under me.”