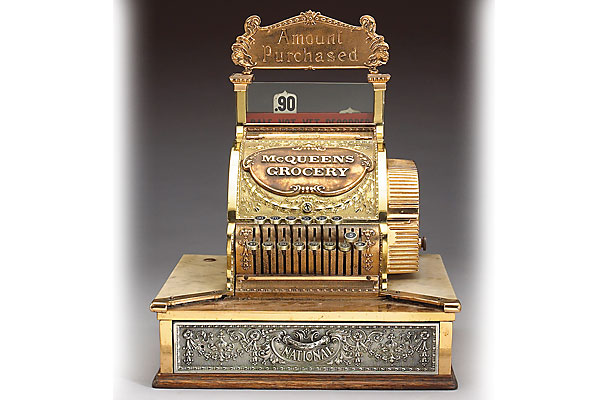 The former Pinkerton detective and hired gunman hanged for the murder of a rancher’s 14-year-old son, Willie Nickell—a crime he confessed to in 1903. Yet historians debate to this day whether or not he committed the murder. A mock trial in Cheyenne, Wyoming, in 1993 proclaimed Horn innocent, basing the new verdict on the jury’s belief that the confession Horn gave was questionable since it had been alcohol-induced.

They deemed his statements at trial as being said by a braggart whose feelings of inferiority led him to say things that made him bigger than he really was, true or not—and even if his words would kill him.

Whether you damn him or praise him, Horn is a legendary character of the Old West. And he popped up in two auctions this past November: the Steve McQueen auction on the 11th at Bonhams & Butterfields and the Historic Americana Auction on the 16-17th at Cowan’s Auctions.

Among Cowan’s Western photography lots was a cabinet card of Tom Horn.  Wesley Cowan, founder of Cowan’s Auctions, cares about the items being authentic (he even shares the fakes, frauds and forgeries he’s discovered on cowanauctions.com/
fakesfraudsforgeries.asp). When it comes to authenticating Western photography, Cowan often asks for assistance from True West’s own Robert G. McCubbin, as he did with the Horn cabinet card. McCubbin had seen it years earlier, and he and other experts in the field had already cast suspicion on it being Horn. Hearing this, Cowan pulled it from the November auction.

One item that had no problem with authenticity, though, was a collectible tied to Hollywood’s Tom Horn, played by Steve McQueen in 1980, the same year the actor died. Bonhams & Butterfields got the item straight from McQueen’s widow, Barbara.

The King of Cool’s auction at Bonhams & Butterfields was a huge success, totaling more than $1 million. More of his collectibles are showcased here.