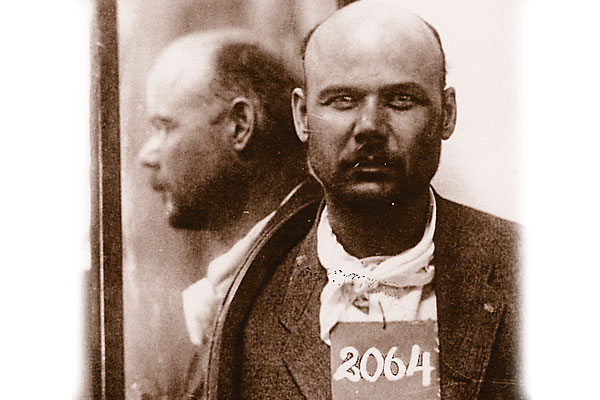 Today is supposed to be Wells Fargo Express Agent Jeff Milton’s day off. But someone telegraphed in sick, so he is working the run from Nogales, Arizona, to Benson.

At dusk, when the train glides into the small station in Fairbank along the San Pedro River Valley, Jeff opens the express door to unload the packages bound for Tombstone and the surrounding area. As Jeff hands down the designated goods to the station agent, a cowboy on the platform yells out for Jeff to put up his hands.

“Just a bunch of drunk cowboys having a joke, I guess,” the agent replies.

“That kind of joke is liable to get somebody killed,” says Jeff, as he continues unloading packages.

Five cowboys, who are using passengers on the platform as shields, show their weapons. One of them yells, “Throw up your hands and come out o’ there!” With the command comes a rifle shot; the slug takes off Milton’s hat.

Reaching behind the door of the express car, Milton appears with a sawed-off shotgun and barks back, “If there’s anything here you want, come and get it.” He quickly sizes up the situation, though, realizing he can’t return fire with the shotgun without hitting innocent people. Unfortunately, his pistol is on his desk, inside the car.

The five cowboys, still hiding behind passengers, open fire with high-powered rifles. The volley of shots from the outlaws shreds Milton’s shirt as several shots strike his left arm between the elbow and shoulder, spinning him around and knocking him flat.

Thinking they have killed Milton, or at least knocked him out of the fight, the outlaws jump up into the doorway of the railroad car. Milton raises the shotgun with one hand and lets loose, hitting Jack Dunlap with pellets while another ball zings past Dunlap and hits Bravo Juan Yoas in the seat of his pants.

“Look out for the son of a bitch, he’s shooting to kill,” yells Dunlap, as he falls.

Milton’s wound is serious (a slug has cut an artery). Faint from the loss of blood, Milton still has the presence of mind to kick the door shut and, at the same time, remove the keys to the safe from his pocket, flinging them into a pile of packages at the opposite end of the car. Cramming his wounded arm into the handle of a trunk, he rips the sleeve of his shirt at the cuff, tearing it to the shoulder, then twists his homemade tourniquet around his arm to stop the flow of blood spurting in his face. Before finishing, he passes out, landing in between the two trunks.

Outside, the outlaws circle the car and shoot round after round into it to ensure the death of Milton. After threatening the life of the engineer  and using his body as a shield, the robbers climb into the car. One outlaw is about to shoot Milton, but the engineer stops him by pleading, “The man’s dead now.” The men search frantically for the keys but can’t find them. In desperation, they round up Dunlap and gallop off into the night with $40 in change.

The fight is over, but the race to save Milton’s life has just begun.

The train robbers go out of their way to make sure Milton is far away from the action on the day of the robbery. The gang sends Billy Stiles to Nogales to tempt Milton with a story that a mining man wants to look at Jeff’s claims out at the Quijotoa Mountains west of Nogales. They plan it for Milton’s day off. To make doubly sure, Stiles asks Jeff to wire him from Nogales in case of any change in plans.

Milton does not get his day off though. He receives a telegram in Imuris, Sonora, from W.F. Overton of the express company, informing him that the normal messenger is sick. Jeff forgets about his meeting with the mining speculator and mans his post through Nogales. The outlaws no doubt do a double-take when they see Milton—the very man they did not want to go up against—standing in the doorway of the express car in Fairbank.

The Race to Save Jeff Milton

After standing off five armed outlaws all by his lonesome, Jeff Milton is rushed to Benson where a special engine and boxcar arrives to transport him to the hospital in Tucson. An improvised tourniquet goes a long way in helping save Milton’s life. At Saint Mary’s hospital in the Old Pueblo, Dr. H.W. Fenner operates on Milton’s shot-up arm, tying the bone with piano wire.

After nearly three hours under chloroform, Milton awakes in the night, thirsty for water. A young Mexican boy, assigned to watch over Milton, tells the lawman he is on strict orders not to give Milton any water.

“Listen here,” the grizzled lawman hisses at the boy. “If you don’t bring me some water, when I get up from here, I’m going to kill you.”

The boy quickly brings a pitcher of water. Jeff drinks it all, calls for more and finishes three pitchers before his thirst is satiated. Then he sleeps eight hours.

A nurse arrives the morning and notices Milton’s gun under his pillow. The nurse reprimands him, “You can’t keep that thing there.” He replies, “Well, if I can’t, I’ll go to another hospital.”

With the wound not healing properly, Dr. Fenner sends the lawman to San Francisco for treatment. By this time, Milton’s arm is stinking and his left leg is swelled up to the size of his body. When the doctors at the Southern Pacific Hospital tell Milton to prepare his will because they are amputing his arm at the elbow, Milton tells them they aren’t taking off his arm. He asks for the bill and pays it.

Someone chauffeurs him to Lane Hospital in San Francisco so he can be seen by Dr. Goodfellow, an old friend of his from Tombstone. Ordering Milton a whiskey, the doctor probes and cleans out the wound, fitting his patient with a brace to support his arm. Goodfellow predicts Milton will never use the arm again.

Milton throws the brace out the train window on his way back to Arizona. He fashions a buckskin bag with birdshot, which he ties to his wrist so he can constantly attempt to grab it with his bad hand. Over time, he is able to flex his hand, but he never does recover the free use of his arm.

Nearly two decades after the Earps fled Arizona as fugitives, Tombstone had faded as a mining mecca. Speculators all moved up the road to Pearce, taking some buildings from Tombstone with them.

A new breed of lawmen worked both sides of the fence during that time in Cochise County. Burt Alvord, who grew up in Tombstone, was a well-known badman, which was why the town of Willcox hired him as a constable to police the boisterous cowboys in the area.

Alvord then hired Billy Stiles and Bill Downing as his deputies. Conspiring to leverage their newfound legality, Alvord gathered in local cowboys—including Matt Burts, the Owen brothers and Jack Dunlap—to rob some trains.

The gang’s first robbery took place in Cochise on September 9, 1899, when two men held up the train and got away with an untold amount of booty. Alvord and his men led the posses organized to chase those robbers and, of course, they found nothing. The second major robbery attempt occurred in Fairbank, but their well-laid plans to way-lay Milton backfired. Then the posse out of Tombstone found Jack Dunlap where his partners had left him. He lived several days and “spilled the beans,” implicating Matt Burts and confirming the suspicion that Burt Alvord, Billy Stiles and Bill Downing had backed the robbery.

Armed with Dunlap’s confession, lawmen arrested the Owen brothers, Brown, Downing, Stiles, Burts and Alvord. Stiles turned state’s evidence, confessing he and Burts had committed the Cochise robbery and that Alvord and Downing had helped plan it. Released, Stiles went to Tombstone and busted Alvord out of jail.

At the request of Burt Mossman, the captain of the newly-formed Arizona Rangers, Alvord and Stiles helped capture Mexican bandit, Augustin Chacon. Yet the duo ended up in the Tombstone jail once more. They escaped their cell on December 15, 1903, fleeing to Mexico, but Alvord would soon find himself back in jail. Lawmen caught him while he was riding with Stiles through the Nigger Head Gap on February 17, 1904.

Alvord finally served time in the pen (see mugshot), but it would not be the last time he saw the inside of a jail cell. He continued to ride a slippery journey through the gray area of the law.

A Confidential Report from the Arizona Rangers

Stiles and Alvord were still at it in 1906, according to a letter by Arizona Ranger H.H. McPhaul dated July 2 of that year. He warned authorities that the duo, lurking “near the Mexican line south of Yuma,” intended to rob a train “on the [Southern Pacific] system.”

The tip-off? The men were planning on placing water kegs along their escape route, intending to hold up “a train during the hot weather and with the aid of the water kegs outride and avoid any party sent after them,” informants told McPhaul.

A Good Man with a Gun

“Milton’s Nerve” screamed the headline of an article about the express messenger’s “brave stand” against overwhelming odds, published in the Arizona Citizen on February 16, 1900.

“He was extremely restless, but never nervous in danger” is how Milton’s biographer, J. Evetts Haley, described him. “He was the agent of a proud and mighty land; he was always armed with the escutcheon of high honor. Not a pang of conscience ever plagued him. With a clean code, a sense of justice tempered with fairness, and a mind quick in appraisal, he positively knew that right had always ridden close at his side.”

During Milton’s long career, he had gone up against scores of badmen including John Selman, John Wesley Hardin and Black Jack Ketchum.

When his wife Mildred noticed a bullet scar beneath his jaw, she inquired, “Jeff, who shot you there?” He replied, “A man who is not alive.”

Bravo Juan Yoas fled to Mexico. After stopping in Cananea to have his wound dressed, Mexican officers spotted him and arrested him. They handed him over to the sheriff in Tombstone.

Billy Stiles freely roamed around the West and was finally killed in Nevada in January 1908, while working as a deputy sheriff under the name Willaim Larkin. Matt Burts was killed in a gunfight in Government Holes, California, in 1925. Downing was killed in Willcox in 1908. Yoas supposedly died on the Amazon in 1910. Burt Alvord rambled around South America, and after a time in Brazil, he died of fever in the Barbados in 1910. When the Owen brothers died is unknown.

Jeff Milton went from chasing outlaws on horseback as a Texas Ranger to jumping in a Model T Ford in 1917 at Tombstone, running down a bank robber and capturing him. He retired in 1930, due the rest after having served as a Ranger, range detective, mounted inspector along the Mexican border, rancher, prospector and oilman. After several years in Tombstone, he and his wife moved to Tucson, where he died at age 85 in May 1947.