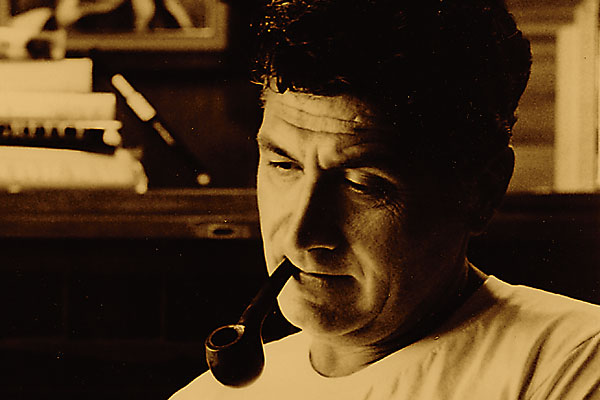 Glenshannon’s spread was one of the biggest in Texas—or anywhere…. One of Glenshannon’s cowboys, an amateur geographer, once observed that it would take a man on a good horse a lot of breakfasts to circle it. Nobody ever tried.

But there were those, especially in the early days, who did try to invade Glenshannon’s domain. Indians. Mexicans. Bandits. Rustlers. All now dead and buried or banished.

This man with the boisterous laugh has been awarded the Golden Boot for Western films, the Edgar Award for 1980’s The Man with Bogart’s Face, three Emmys for Confidential File and the Wister Award from Western Writers of America for his lifetime achievement in the field of writing about the American West.

His novels include Claws of the Eagle: A Novel of Tom Horn and the Apache Kid; Runaways; Summer of Jack London; There Came a Stranger; Double Eagles; Riders to Moon Rock; The Rebel: Johnny Yuma; and Big Ike, which is due out from Leisure Books in April.

In addition to his books and screenplays, he has written songs including “Johnny Yuma Was a Rebel” for the TV show, “The Ballad of John Chisum” for Chisum and “You Can’t Ever Go Home Again” for Ride Beyond Vengeance.

In his decades of film and TV production, he has worked with a number of stars: Robert Mitchum to Burt Reynolds and Angela Lansbury to Gail Russell.

TW: Which star was your favorite?

Fenady: That’s easy, John Wayne. I really worked with some giants. Besides John Wayne, literal giants were Chuck Connors and Robert Taylor, who was in the movie version of Hondo that sold as a TV series.

Fenady began his storytelling career by producing and acting in radio shows and summer stock companies, and touring with the National Classic Theatre in a Shakespearean Company. But after he made the move to Hollywood, he left the stage for the page and began writing for the TV documentary series Confidential File.

“I’m the only man who was ever strapped into the gas chamber at San Quentin and got up and walked away,” says Fenady about one of his segments for Confidential File.

He later wrote and produced the 1959 film The Young Captives for Paramount, and then returned to TV to create and produce The Rebel series for ABC, starring Nick Adams and featuring Fenady’s theme song, which was recorded by Johnny Cash.

The Rebel set him for life. “For better or worse,” he says, “I was branded a Western writer/producer. As a matter of fact, the next series I produced was called Branded.”  It starred Chuck Connors, who also starred in Ride Beyond Vengeance. Then came Hondo, the project that launched Fenady’s long-term association with John Wayne, which culminated in him writing and producing Chisum, the feature film story of cattleman John Simpson Chisum, whom Wayne played. The movie is based on the 1870s Lincoln County War.

Fenady’s 2002 novel, Double Eagles, has its roots in his association with John Wayne. He was working on Chisum at the time, and Wayne encouraged him to do the screenplay of Double Eagles that led to the novel; neither was finished before Wayne’s death.

What about Big Ike? Is that novel an original story?

It’s an original story. It’s a composite character of all of the great tradesmen and freighters: people like Levi Strauss, Solmon Bibo, Leopold Ephraim or Mike Goldwater.

As with all his books, Fenady can give the story line in a 60-second staccato statement. That kind of concise pitch comes only with years of practice in selling books to editors or film projects for TV or the movies.

[Big Ike] looks like a Viking—escaped the Cossacks in Russia, went to England, his wife died when having the second son. He left England, brought the sons to America. He goes to the goldfields and becomes a freighter; started a freighting line in Prescott, Arizona. Other characters in the book include a beautiful young nun, the Apache Chief Colorados, Gen. George Crook and two black characters.

The last two books were A. Night in Beverly Hills and A. Night in Hollywood Forever. Both were mysteries. I’m now committed to write a novel for Leisure, The Trespassers: A Western, and then another “A. Night” project for Five Star. The next project title will be A. Night Before Christmas.

When those books are finished, Fenady intends to “write some reminiscences.”