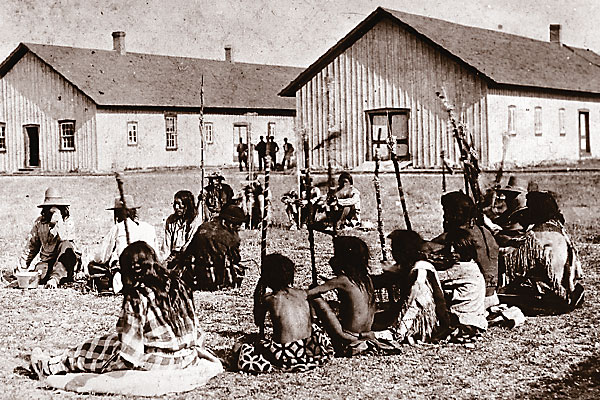 The landscape along the Whoop-Up Trail was “rolling prairie, cut up occasionally by collies [coulees]—covered with short, dried up grass and prickly pear—no other vegetation, and not a stick of wood between the Marias and Belly Rivers,” American prospector Charles Schafft said. Truth is, except where farmers have turned the land into fields, it is still pretty much like that.

Forged as a trade route linking the American frontier with the Canadian outback, the Whoop-Up most likely got its name for the fact that most of the merchandise was in the form of whiskey. Illegal, but a hot product nonetheless, this whiskey trade helped establish Fort Benton, Montana, as a primary supply point, and it led to the construction of Fort Whoop-Up (first known as Fort Hamilton), located near Lethbridge, Alberta, in Canada.

Fort Benton traders John J. Healy and Alfred B. Hamilton built Fort Hamilton in 1869 as a trading post. It burned during the first year of operation and was replaced by a new structure, which soon had the nickname Fort Whoop-Up. In both cases, the post was located where the Belly River (now called the Oldman River) and the St. Mary’s River converged. These sites are a few miles south of the location of the Fort Whoop-Up Interpretive Centre (that’s a Canadian spelling), which has been re-created to tell the dramatic story of this whiskey-runnin’ trade route.

The fact that a police force didn’t exist to any measurable degree in neither Montana nor Alberta meant freighters could carry illegal cargo—whiskey, firearms and ammunition—virtually unimpeded. Whoop-Up Bug Juice, made of a combination of alcohol, ginger, molasses and red pepper spiced with chewing tobacco and boiled into “firewater,” was among the legendary products. A jug of bug juice could cost as much as two horses when supplies were tight. More common was a beverage made of pure alcohol diluted with water and other ingredients, such as Hostetter’s Stomach Bitters and India ink (added for color).

Some legal trade also occurred at Fort Whoop-Up including an exchange of furs for food and clothing. That was the same case at Fort Benton, along the Missouri River in Montana, where steamboats chugged in on a regular basis each year to disgorge an amazing array of products that would be hauled not only over the Whoop-Up but on other trails to outposts and gold camps in the Montana Territory.

The birth of the trail—sometimes called the Benton Trail, but more commonly the Whoop-Up–came with the surrender of the region by the Hudson’s Bay Company due to decline in the beaver trade. When HBC pulled out, the traders moved in, hauling hooch and guns, and exchanging both for pelts and buffalo robes. From 1869 until 1874, the region was pretty wide open since nobody was all that interested in establishing laws or enforcing them. But eventually, after an 1873 Cypress Hills battle that led to the killing of many Assiniboines, complaints traveled east over the Canadian prairie and the government established a police force: the North West Mounted Police. These Mounties (as they soon became known) little-by-little enforced law on the area and shut down the whiskey trade. But the trail foreshadowed the route of the Great Falls & Canada Railway, constructed and first operated in 1890 between Great Falls, Montana, and Lethbridge, Alberta, to haul Canadian coal to markets in the United States.

Because most of the manufactured goods transported over the trail started their journey at Fort Benton, that is where we will get on this route as well.

Fort Benton, established in the 1840s as an American Fur Company post, became a trade and travel hub after 1860 because up to 50 steamboats would arrive at the levee each year, bringing with them cargoes of cloth, food, firearms and other goods. The supplies were offloaded from the steamboats and placed in large freight wagons for distribution along the trails that fanned from Fort Benton. Once empty of cargo and passengers, such as fur traders, gold miners and eventually settlers, the steamboats could fill their holds with new products that came from the region: furs and buffalo robes.

Fort Benton today is a National Historic Landmark because of its importance to navigation on the Missouri River. A reconstructed Fort Benton is located on the original site and includes exhibits related to the Whoop-Up Trail and other area history. At the Bureau of Land Management Upper Missouri River Breaks National Monument Interpretive Center, which just opened, the exhibits include information about trails in the area and a display that depicts a Murphy freight wagon.

Fort Benton’s Museum of the Northern Great Plains shares the story of law and order coming to the region with the establishment of the North West Mounted Police in Canada. No trip to Fort Benton is complete without spending some time walking along the Missouri River and a meal, or stay, at the Grand Union Hotel.

From Fort Benton, the Whoop-Up headed northwest to the Midway Station, also called Lucille or Froggie’s Stopping Place, in the present-day town of Conrad. Such a trip today requires negotiating
a series of rural roads, so we’ll stick
to the highways and take a detour by traveling southwest on U.S. 87 to Great Falls and then turn north on Interstate 15 to Conrad.

Although the Midway/Froggie’s station served early travelers, settlement in this area began in the 1890s with a post office at the trading post of Pondera, located three-quarters of a mile east of Conrad. When the Great Falls & Canada Railway bypassed Pondera by a mile, the community’s six buildings were picked up and moved, giving rise to Conrad, named for W.G. and C.E. Conrad. They owned the Seven Block Ranch and organized both the Conrad Investment Company and the Pondera Canal Company, which led to early agricultural development of the region.

From Conrad, continue north on I-15 through Shelby, Montana, and cross into Canada near Sweetgrass. The road becomes Provincial Route 4 North in Canada—follow it to Lethbridge.

The North West Mounted Police reached Fort Whoop-Up in October 1874. The following year, the officers established their own post at the fort. Once they’d arrived and cleaned up the whiskey trade, the Mounties (today these officers are known as the Royal Canadian Mounted Police) found the trail useful for transportation of goods from Fort Benton to western Canada. Goods came in on bull trains. Large groups of Murphy wagons, capable of hauling from two to five tons of merchandise each, were hitched together and pulled by multiple teams of oxen—called bulls.

The officers maintained the fort until it burned in 1888 in a conflagration that started in their barracks. Although the fort itself remained in operation after that blaze, the Mounties had shut down the whiskey trade and deserted the post. Area residents eventually scavenged the fort until it completely disappeared in a flood of the Belly River in 1915.

Four years before the fire, in 1884, the North West Mounted Police built a large barracks at Fort Macleod that remained in use for half a century. The community of Fort Macleod grew up surrounding the police fort and supplies came in to stores stocked by Fort Benton merchants: T.C. Power & Bros. and its rival the I.G. Baker Company. But the discovery of coal, and subsequent development of a rival outfitting point, reduced the significance of Fort Macleod, marking the beginning of a decline in importance for the Whoop-Up Trail. The last bull train between Fort Benton and Fort Macleod took the trail in 1892.

But that wasn’t the end of this whiskey-runnin’ trail. When Prohibition became the law of the land in the U.S. in 1919, the old route became reactivated and reversed: bootleggers loaded Canadian liquor into side-curtained cars and headed south.

Today, visitors to Alberta can learn more about the trail, the whiskey trade and the Mounties at both Fort Whoop-Up and Fort Macleod, which are maintained by preservation groups. Among the exhibits at Fort Whoop-Up Interpretive Centre in Lethbridge is a large collection of period firearms. You will also find re-creations of the police barracks, bunkhouse, livery, kitchen, trade room, Indian room, bastions, a corral and a garden.

Although mainly legal trading occurred along the Whoop-Up Trail, Fort Whoop-Up remains a top attraction because it’s one of the most infamous of the whiskey trading posts from the Old West era.