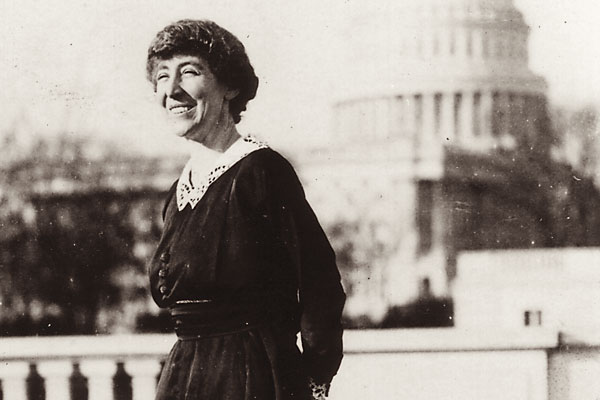 When it comes to women in politics, Western women have always led the way.  They did so back in 1916, even before all women had the vote, and in the last national election that saw California’s Nancy Pelosi become the first female Speaker of the House.

While currently more women are present in Congress than ever before, and women outnumber men in the country, they still occupy only 16 percent of Congress. As headlines often declare, “Progress of women in D.C. has been slow.”

The woman who started it all is a name you probably don’t even know.

The very first woman to ever serve in the U.S. Congress was a Republican from Montana named Jeannette Rankin. She was elected in a state that early on gave women the vote, and she took her seat three years before her Eastern sisters could even cast a ballot.

In fact, four of the first five women elected to Congress came from the West: No. 2 was Alice Mary Robertson, a Republican from Oklahoma, while numbers four and five were California Republicans Mae Ella Nolan and Florence Prag Kahn.  It’s also worth noting that the first woman on the U.S. Supreme Court was Arizona’s Sandra Day O’Connor. Rankin started it all.

She was born June 11, 1880, near Missoula, Montana, the eldest of 11 children of a rancher and former schoolteacher. She graduated from the University of Montana in 1902 with a degree in biology, which she went on to teach. Later, moved by the conditions she saw in Eastern slums, she attended the New York School of Philanthropy to train for a career in social work. Her first job was in 1909, in Seattle, Washington, yet she soon left social work to answer the call for woman suffrage. She would spend the next five years lobbying for the women’s vote in California, Washington and Montana.

She became the first woman to address the Montana legislature, impressing the legislators with her speaking ability. In 1914, she became legislative secretary of the National American Woman Suffrage Association and led the successful campaign for suffrage in her native Montana.

She is best remembered as casting one of only 49 votes against declaring war on Germany in 1917, a vote she cast just four days after taking office.  “I want to stand by my country, but I cannot vote for war,” declared Rankin, angering her constituents as well as women in the national suffrage movement. Suffrage groups cancelled her speaking engagements. Women leaders such as Carrie Chapman Catt blasted her vote “as opening the suffrage cause to criticism as impractical and sentimental.”

Rankin responded, “The first time the first woman had a chance to say no against war, she should say it.”

But her anti-war vote proved so unpopular, it momentarily ended her political career. She was gerrymandered out of her district. When she tried running for the U.S. Senate, she lost the primary in 1918. After running as an independent and still losing, she changed her focus to lobbying for peace.

When she moved to Georgia, she formed the Georgia Peace Society and worked with the National Council for the Prevention of War. In 1935, a Georgia college offered her the position of Peace Chair. Afterwards, when a Macon newspaper dubbed her a Communist, she sued the paper for libel, winning when the court declared her “a nice lady.”

Her political life wasn’t over. In 1940, she returned to Montana and ran again for Congress, winning another seat, making her one of six women in the House and two in the Senate.

She would repeat her earlier performance, this time standing alone as the only vote against declaring war on Japan after Pearl Harbor. “As a woman, I can’t go to war, and I refuse to send anyone else,” she declared as she cast her vote.  Again, the press and her colleagues denounced her and her position that Roosevelt had deliberately provoked the attack on Pearl Harbor.

Ironically, her staunch opposition to war also made her a steadfast advocate for soldiers and veterans. “She recognized them as pawns in the games of politicians,” the Jeannette Rankin Peace Center notes. But the center also points out that Rankin did respect their contributions to America. “It was she who first introduced the GI Bill to Congress, which guaranteed post-discharge education and other benefits to those who served in the military.”

Voters wouldn’t see the distinction, and she knew it. She didn’t even bother to seek reelection, knowing her anti-war stance was so unpopular she had no chance at the ballot box.

She returned to Montana and cared for her mother, then traveled worldwide, promoting peace. At one point, she studied nonviolence with Gandhi in India.  She was also a founding member of the Women’s International League for Peace and Freedom and founding vice-president of the American Civil Liberties Union.

Even into her late 80s, in 1968, she led 5,000 women, calling themselves the “Jeannette Rankin Brigade,” to Capitol Hill to oppose the war in Vietnam.

She left a portion of her Georgia estate and $16,000 to assist “mature, unemployed women workers.” It was the seed money for the Jeannette Rankin Foundation, which, in 1978, awarded one grant of $500 to help a mature, low-income woman with education costs. In 2005, the foundation awarded 65 grants of $2,000 each.

In 1985, a statue of Jeannette Rankin was placed in the U.S. Capitol’s Statuary Hall. Her unflinching pacifism is probably best remembered by her declaration: “You can no more win a war than you can win an earthquake.”