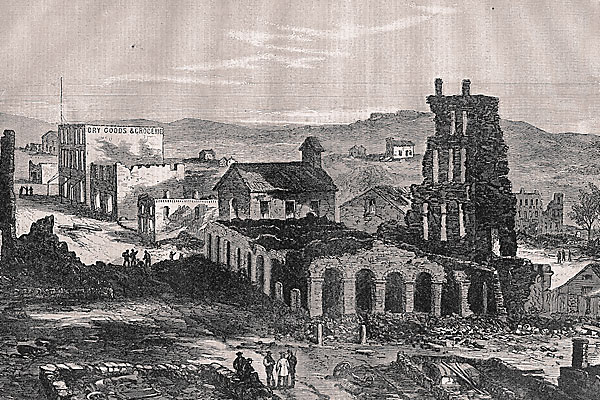 The clerk at the bookstore recommends that I grab supper and a beer at the Free State Brewing Company.

He assures me it’s no joke.

Wow. I guess Lawrence is the last liberal bastion in the Jayhawker State. No wonder William Quantrill and his Missouri boys wanted to burn the place down.

This little misunderstanding started back in 1854 when abolitionists stampeded west to make sure Kansas became a free state. Lawrence grew to be a key stop on the Underground Railroad and the headquarters of anti-slavery Jayhawkers. Violence with pro-slavery Missourians escalated and long before the Civil War started, Kansas was bleeding.

Enter Quantrill. On August 21, 1863, about 400 Missouri guerillas sacked the city with plans to “burn every house and kill every man.” They dang near succeeded, leaving some 150 dead and the town in smoking ruins. But Lawrence rose again, giving birth to the city’s motto, “From Ashes to Immortality.”

Detour: Okay, before Missourians demand Equal Time, here it is. Not all Kansans wore white hats. John Brown and Jim Lane had a few issues, so if you want another viewpoint, cross the border and check out the 1859 Jail, Marshal’s Home & Museum in Independence. Head to Higginsville and visit the Confederate Memorial State Historic Site (where parts of Quantrill are buried), with the Confederate Soldiers Home that was founded in 1891. Tour Osceola, where the first Missouri Confederate Brigade formed in 1861, and the Jesse James Farm & Museum in Kearney. Or if you really want to live dangerously, walk onto the University of Missouri campus in Columbia wearing a KU sweatshirt.

When you return to Lawrence, stop at the old Union Pacific Depot, now the city’s visitor information center, and pick up a brochure on a self-guided tour of “Quantrill’s Raid: The Lawrence Massacre.” Before heading out on your walk, watch the 27-minute film, Lawrence: Free State Fortress, which chronicles the city’s first decade.

Two blocks west of downtown, check out Old West Lawrence. It looks a lot better than it did after Quantrill’s raid. Back in ’63, the boys targeted the neighborhood since many of those Jayhawkers and abolitionists and rich folks lived there. So the boys burned most of the homes.

Proof that Lawrence really did rise from the ashes can be found at the historic Eldridge Hotel. Built in 1855 by New Englanders and named the Free State Hotel, the hotel did not cotton to Missouri trade. A year later, pro-slavery forces under Sam Jones burned the hotel. Colonel Shalor Eldridge wasn’t going to stand for such treatment, so he rebuilt it. Not only that, but the colonel added another floor to the hotel and said he’d rebuild it again, bigger and better, no matter how many times raiders destroyed it.

The colonel lived up to his word, and the resurrected hotel got a new name, the Hotel Eldridge, a moniker that probably didn’t inflame pro-slavers as much as “Free State.”

The Eldridge survived the rest of the war, but by the 1920s, it had fallen into disrepair, so civic leaders tore it down and rebuilt it in 1925. Since then, it has fallen and risen, as apartments, hotel and new, improved hotel. The latest resurrection came when the Eldridge reopened in 2005, restored to its 1925 glory.

For the record, Lawrence isn’t just fiery history. It’s art and theatre and antiques. It’s home to the horse Comanche, survivor of the Little Bighorn, at the KU Natural History Museum. Better yet … it’s brew pubs. When the Free State Brewing Company opened in 1989, it became the state’s first legal brewery in more than a century.

I’ll meet you there.